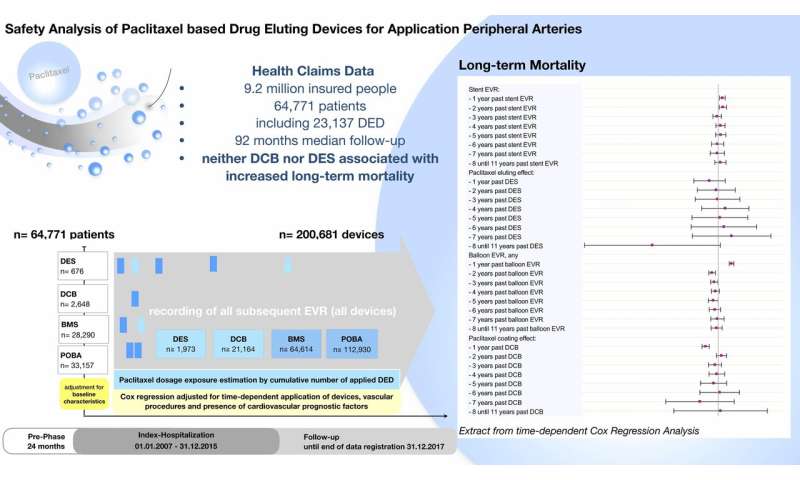 Devices coated with a drug called paclitaxel that are used for widening blocked arteries in legs and feet are safe and not linked to an increase in deaths, according to a study of nearly 65,000 patients, published in the European Heart Journal today.

In January 2019 the US Food and Drug Administration (FDA) issued a safety alert about the use of paclitaxel-coated stents and balloons for arterial revascularisation in the lower limbs following findings from a meta-analysis of 28 randomised controlled trials involving 4663 patients that suggested there might be a two-fold increased risk of death among patients who had these devices fitted.

However, the current study has analysed data on the use of paclitaxel-coated stents and balloons in 64,771 ‘real world’ patients with lower extremity artery disease (LEAD) who underwent 107,112 procedures to unblock arteries from the time that paclitaxel was first used to coat stents and balloons in 2007 up to 2015. The patients continued to be followed until 2017—a follow-up period of more than 11 years, which is longer than any other study.

First author of the EHJ paper, Dr. Eva Freisinger, of the University Hospital Münster, Germany, said: “Our findings show that paclitaxel-based devices are safe and are not associated with an increase of death. To our knowledge, this is the largest real-life group of patients that has been evaluated with long-term follow-up from the time that paclitaxel-coated devices were first introduced. Our work provides a solid base of evidence that will be difficult to rebut. We expect the FDA and other regulatory authorities will very likely amend their statements on safety concerns on paclitaxel-based devices.”

Paclitaxel is an agent that prevents the proliferation of cells; it is used for coating stents (tubes) and balloons because it limits the growth of scar tissue and a recurrence of blockages in the treated arteries (restenosis). Drug-eluting stents and balloons have been used in millions of patients with lower extremity artery disease worldwide, with over 55,000 balloons and 6,600 drug-eluting stents implanted annually in Germany alone, of which 97% use paclitaxel.

The concerns raised by the meta-analysis at the end of 2018 and the subsequent FDA letter of concern to healthcare providers, resulted in an estimated 50% drop in their use.

In the current study, researchers in Germany retrieved data from 9.2 million people in the German health insurance scheme, BARMER, to identify all patients who had a first endovascular revascularisation for lower extremity artery disease between 2007 and 2015. The patients were treated with one or more of the following:

3.bare-metal stents (i.e. stents that were not coated with a drug);

4.’plain old balloon angioplasty’ (i.e. balloons that were not coated with a drug).

None of the patients had been treated previously with paclitaxel-coated devices because these were only introduced in 2007. However, during the follow-up period to 2017, many of the patients may have had more than one type of device fitted in subsequent procedures and the researchers took this into account in their analyses. During this time a total of 23,137 drug-eluting devices were used. By 2017 42% of patients had died.

After adjusting their analyses to take account of factors that could affect the results such as age, sex, pre-existing heart or blood vessel risk factors (such as smoking and weight) and other medical conditions, the researchers found that the risk of death from any cause up to 30 days after the revascularisation did not differ significantly between the different devices used. After 11 years of follow-up, paclitaxel-coated stents and balloons were not associated with an increased risk of death; paclitaxel-coated balloons were linked to a slightly decreased risk of death during the first year, but this was not seen in subsequent years.

The authors write: “Based on 9.2 million insurants, respectively over 10% of the German population, our data represent the current practice in endovascular treatment of LEAD.”