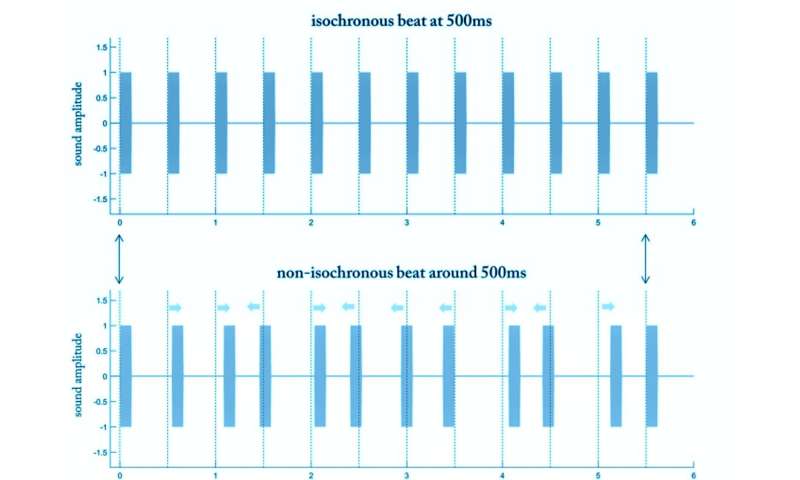 Rhythm is a fundamental aspect of music, dance and language. However, we do not know to what extent our rhythmic skills depend on ancient evolutionary mechanisms that may be present in other animals.

“In our study, we explored whether other animals can detect an isochronous beat (in which all signals are separated by the same interval) and distinguish non-isochronous beats, regardless of other irrelevant features such as tempo,” assert Alexandre Celma-Miralles and Juan Manuel Toro, ICREA research professor with the Department of Information and Communication Technologies (DTIC), and members of the Language and Comparative Cognition research group (LCC) at the Center for Brain and Cognition (CBC) at UPF.

The perception of temporal regularities is essential to synchronize to music and dance. The researchers explored the detection of isochrony in two mammal species for which they trained rats (Rattus norvegicus) and humans to discriminate sound sequences with regular intervals from sound sequences with irregular intervals. The researchers started from the assumption that that the detection of regularity may not rely on vocal learning skills and that both rats and humans distinguish regular from irregular stimuli.

The study used four different tempi in the training sessions and introduced two new tempi in the tests. They then compared the behavioural responses of the two species. They discovered that both rats and humans responded more to new, regular sequences than to irregular ones. Thus, as the authors point out: “In our experiments, we find that species that are very distant from humans, that do not produce complex vocalizations, like rats, have this ability.” Therefore, the lack of difference between the responses of rats and those of humans may imply that the two species are able to detect regularity, regardless of the involvement of any vocal learning ability.

In summary, this study suggests that detecting temporal regularities in sequences of sounds may have ancient evolutionary roots and could rely on timing mechanisms present in distantly related mammals.