Skip to content
HomeDiet & FoodAnd the Most Hated Thanksgiving Dish Is…

When planning Thanksgiving dinner or a Friendsgiving spread, five Thanksgiving side dishes immediately come to mind: stuffing, gravy, cranberry sauce, green bean casserole, and pumpkin pie. And there’s, of course, the turkey. But by no means do we love all sides equally — and a recently published map by The Daring Kitchen, “The Most Hated Thanksgiving Food Across the U.S.,” proves it.

The map is based on geotagged Twitter data comprised of phrases and hashtags about hating specific Thanksgiving Day dishes — phrases like “I hate stuffing” or “I hate cranberry sauce.” More than 50,000 “hate tweets” posted since Nov. 1 were tracked, compiled, and broken down by state, leaving us with not only the most hated Thanksgiving dish by state, but also the most-hated Thanksgiving dish of them all…

A total of 17 states hate cranberry sauce the most, including Texas, Florida, Georgia, California, Washington, and New York. The second most-hated dish is green bean casserole among Utah, Colorado, Kentucky, Ohio, and more. Nine states, including Arizona, Montana, and many states in the south, like Mississippi and Alabama, do not prefer to stuff themselves with stuffing; while sweet potatoes are the fourth most hated dish, particularly in six states, including New Mexico, Nevada and North and South Dakota. And, those in Louisiana, Virginia, and Pennsylvania aren’t fans of pumpkin pie. Turkey also came in last with three states — Maine, Oregon, and Idaho — against the staple Thanksgiving dish. 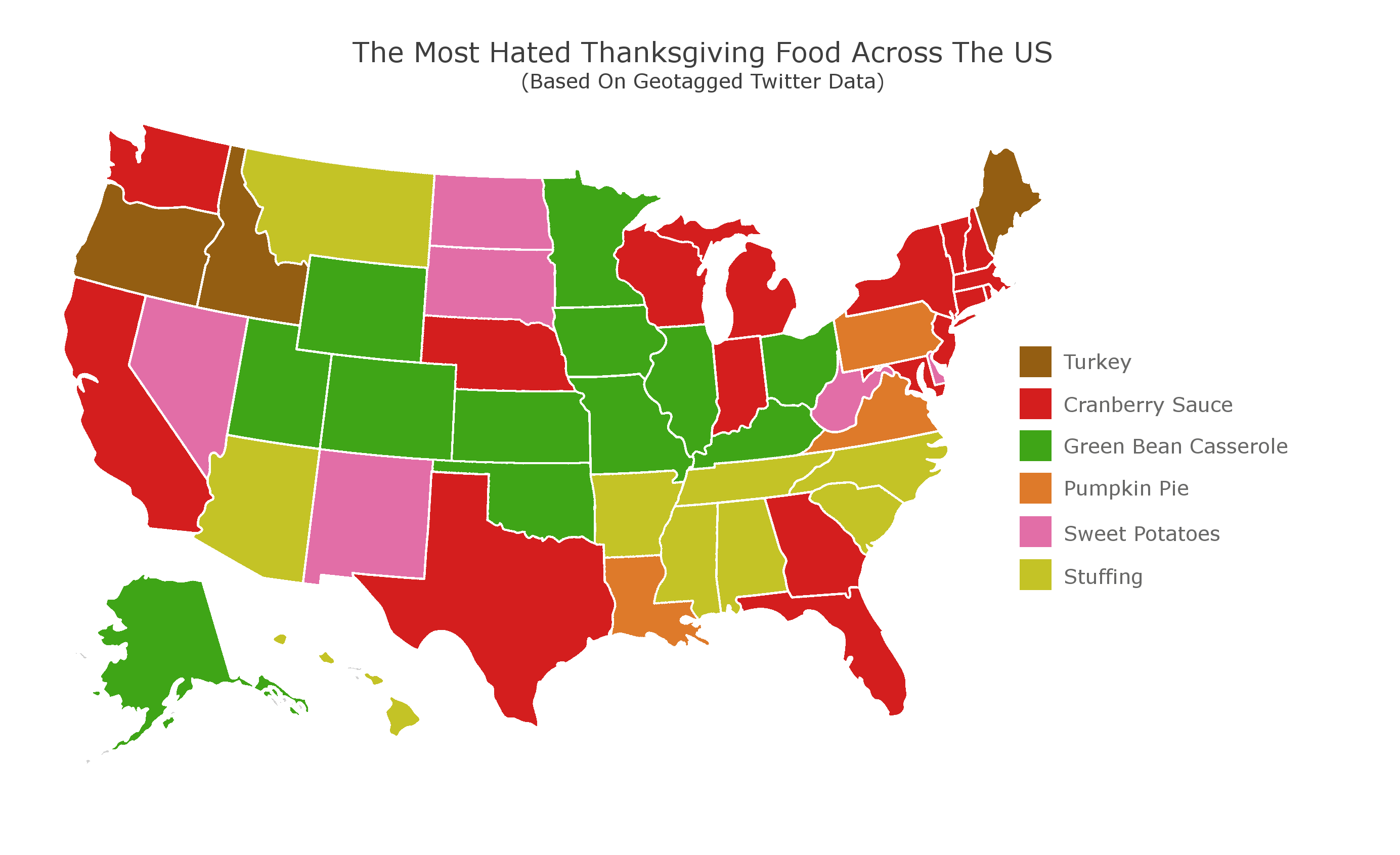 While a majority of Americans love turkey (according to the The Daring Kitchen, more than 75 percent love it), Wallethub also reports that 65 percent of Americans would like an alternative to turkey on the table this year, like ham, chicken, or roast beef. More Americans, however, say it’s not a proper Thanksgiving meal without turkey (70 percent of Americans).

Keep or ditch the cranberry sauce: All that matters is that your Thanksgiving is spent with loved ones. And, hey, if you want to skip cooking altogether, that’s totally acceptable, too; you can join the 9 percent of Americans plan to eat their Thanksgiving meal at a restaurant this year.

Tags:and, Dish, Hated, is, most, Thanksgiving, the
Related Posts