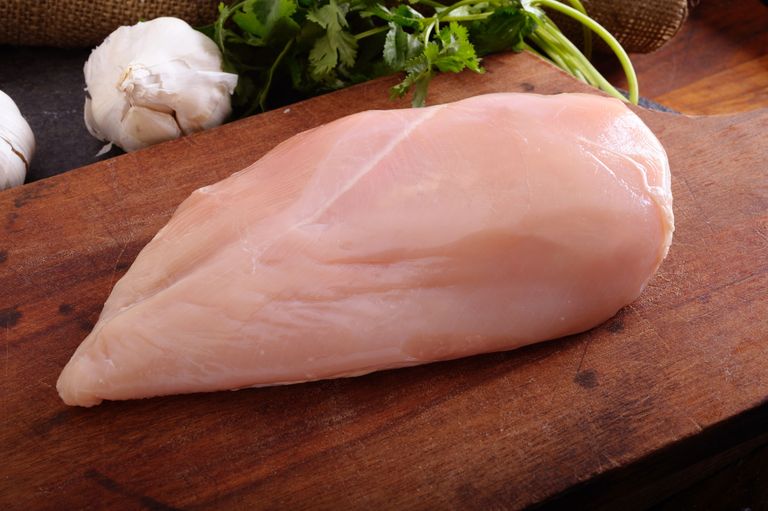 An animal activist group wants you to think twice before chowing down on that grilled chicken sandwich. A video by Compassion in World Farming is urging meat-lovers to learn about “white striping,” a muscle disorder affecting chicken breasts. According to a 2013 study published in the Italian Journal of Animal Science, the condition ups fat content by 224% and lowers the amount of protein. Research published in Poultry Science the same year came to a similar conclusion: Fat increased and muscle decreased based on the amount of white striping.

You might have noticed white striping in your meat aisle already. The condition looks like white striations running parallel to the regular muscle. According to a 2016 study by University of Arkansas and Texas A&M, “the severity of white striping has increased in recent years,” identifying it in 96% of the 285 birds they tested. More importantly, the condition “negatively impacts meat quality” by affecting marinade uptake and cook loss.

Chicken fillets with normal (A), moderate (B), and severe (C) degrees of white striping.
123

The poultry scientists believe that a simple case of supply and demand is at play: The average American eats more than 90 pounds of chicken every year, and that number is only going up. The market for cheap protein encourages farmers to produce bigger birds in less time. According to the National Chicken Council, the average bird sent to market in 1950 was 3.08 pounds and 70-days-old. In 2015, the average weight had doubled — clocking in at 6.24 pounds — but the average age dipped to 47-days-old.

However, a spokesman for the National Chicken Council told Buzzfeed white striping affects only a “small percentage of chicken meat,” and “does not create any health or food safety concerns for people.”

Jaclyn London, R.D., Nutrition Director at the Good Housekeeping Institute, agrees that chicken is still a healthy choice.“Chicken — so long as it’s not breaded and deep-fried — is a great source of lean protein (that also happens to be rich in B-vitamins, iron and vitamin B12),” she says. “Look for labels with a ‘No Antibiotics Ever’ seal; remember to properly cook, store and keep poultry at correct temperatures in the fridge or freezer; and avoid cross contamination during meal prep.”

From: Good Housekeeping US