Skip to content
HomeDiet & FoodStop What You're Doing: You Can Buy 'The Golden Girls' Cereal 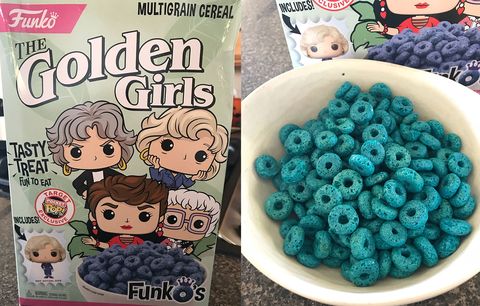 The Golden Girls may have gone off the air more than 25 years ago, but thanks to Hulu—and the amazing Betty White, who continues to be a bad*ss at age 96—the show’s popularity hasn’t wavered. And since there’s no better way to express our love of something than to turn it into food, everyone’s favorite four Miami gals are popping up in yet another grocery aisle.

Earlier this year, we were blessed with both Golden Girls hot sauce and a Golden Girls cookbook. Now, you can add cereal to the list of must-have TV memorabilia. The Target-exclusive product has started rolling out in stores, and features all four cast members on the box, looking slightly like anime versions of themselves.

There are also games on the back, and a note from Funko—a store devoted to pop culture products—explaining the idea behind the cereal. “Hey Kids, remember what it was like to sit in front of the TV on Saturday morning and watch cartoons while eating your favorite cereal?! Well, Funko does! So we’re bringing back Saturday morning to kids of all ages with our new sugar toasted FunkO’s!”

The cereal is inexplicably blue, and features a very angry-looking Dorothy on the front. But those two strange details can be forgiven since each box comes with a collector’s toy inside (Pro tip: You can buy a set of all four at Walmart!).

If you’re searching Target for a box, make sure to check both the cereal aisle and the toy aisle. Shoppers have spotted them in both locations. Otherwise, there are a few available online through ToyWiz and Mercari. Now the only question is: does it taste like cheesecake?

How Stephen 'tWitch' Boss, Allison Holker Are Talking to Kids About Race