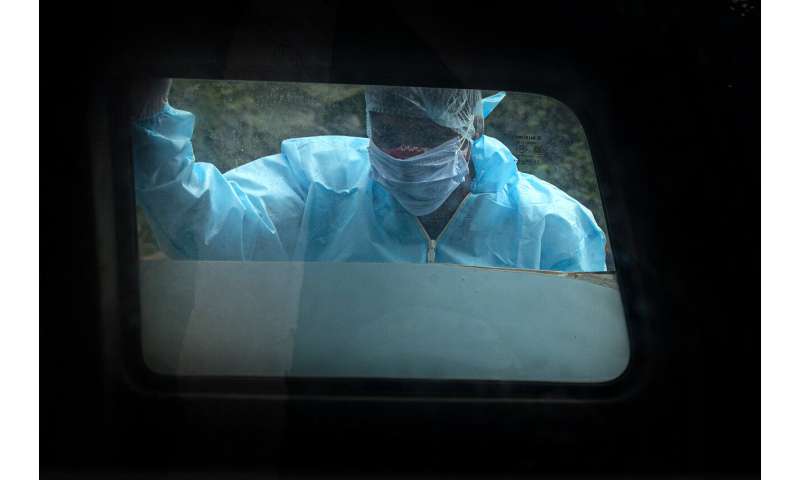 When Narayan Mitra died on July 16, a day after being admitted to the hospital for fever and breathing difficulties, his name never appeared on any of the official lists put out daily of those killed by the coronavirus.

Test results later revealed that Mitra had indeed been infected with COVID-19, as had his son, Abhijit, and four other family members in Silchar, in northeastern Assam state, on India’s border with Bangladesh.

But Narayan Mitra still isn’t counted as a coronavirus victim. The virus was deemed an “incidental” factor, and a panel of doctors decided his death was due to a previously diagnosed neurological disorder that causes muscle weakness.

“He died because of the virus, and there is no point lying about it,” Abhijit Mitra said of the finding, which came despite national guidelines that ask states to not attribute deaths to underlying conditions in cases where COVID-19 has been confirmed by tests.

Such exclusions could explain why India, which has recorded more than 5.1 million infections—second only to the United States—has a death toll of about 83,000 in a country of 1.3 billion people.

India’s Health Ministry has cited this as evidence of its success in fighting the pandemic and a basis for relaxing restrictions and reopening the economy after Prime Minister Narendra Modi ordered a strict lockdown of the entire population earlier this year. 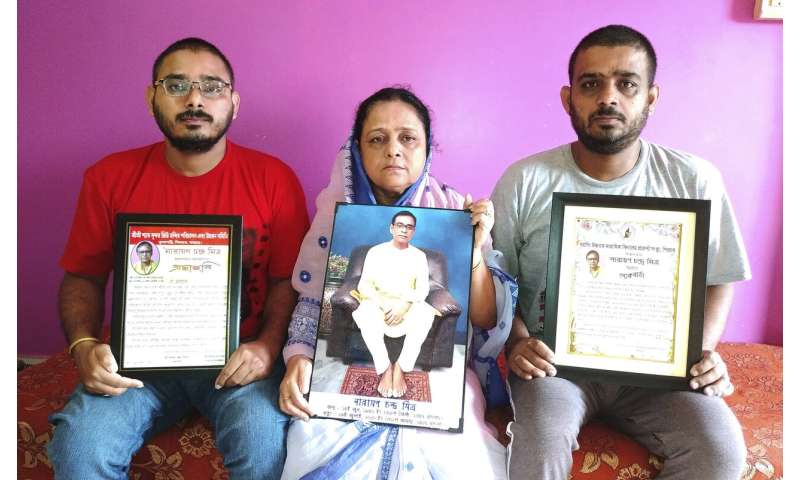 But experts say the numbers are misleading and that India is not counting many deaths.

“We are undercounting deaths by an unknown factor,” said Dr. T. Jacob John, a retired virologist.

The Health Ministry has bristled at past allegations of an undercount in fatalities, but it refused to comment this week on whether states were reporting all suspected and confirmed virus deaths.

Determining exact numbers during the pandemic is difficult: Countries count cases and deaths differently, and testing for the virus is uneven, making direct comparisons misleading.

In India, recording mortality data was poor even before the pandemic struck. Of the 10 million estimated deaths each year, fewer than a quarter are fully documented, and only one-fifth of these are medically certified, according to national figures. 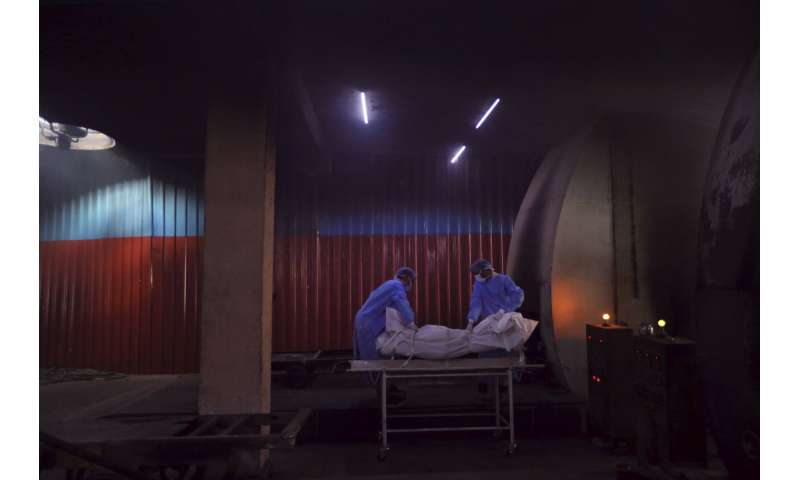 Most Indians die at home, not in a hospital, and doctors usually aren’t present to record the cause of death. This is more prevalent in rural areas, where the virus is now spreading.

Dr. Prabhat Jha, an epidemiologist at the University of Toronto who has studied deaths in India, said countries should err on the side of overestimating deaths if they want to make progress in fighting the virus.

“It is better to have no estimate than an underestimate,” Jha said.

The Health Ministry guidelines echo this concern, asking states to record all suspected virus deaths, including “presumptive deaths”—those who likely died of COVID-19 but weren’t tested for it.

But those guidelines are advisory, and many states don’t comply. In Mahrashtra, India’s worst affected state with more than 1 million cases, suspected deaths aren’t recorded in the tally, said Dr. Archana Patil, the state’s health director. 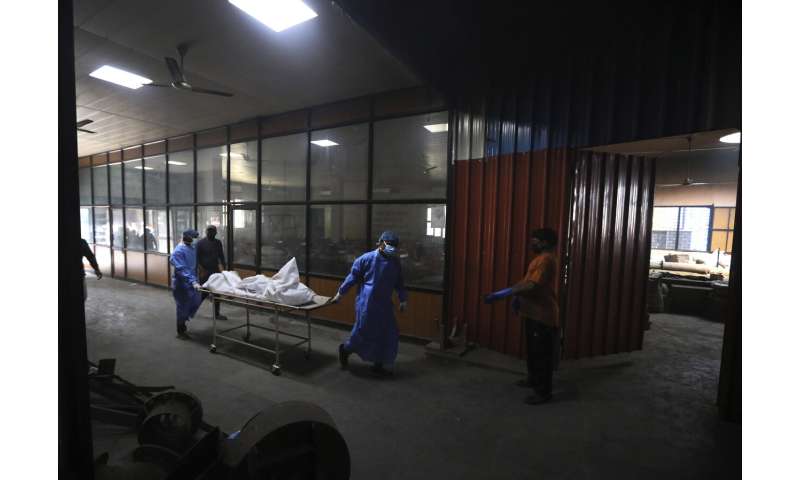 Other states, like Assam, have created panels of doctors who differentiate between “real virus deaths” and those from underlying illnesses. In some cities like New Delhi or Mumbai, these panels occasionally have added missed deaths to the tally.

But Dr. Anup Kumar Barman, who heads the panel in Assam, said the state is not including many fatalities where the virus was “incidental” and not the cause of death. In Narayan Mitra’s case, he had more symptoms of his underlying neurological disorder, Barman said.

Assam state was following the federal guidelines and was citing the virus only in those deaths due to respiratory failure, pneumonia or blood clots, Barman added. But the guidelines list these factors as instances of how the virus can kill and are not a restrictive checklist. Barman refused to answer any follow-up questions from The Associated Press. 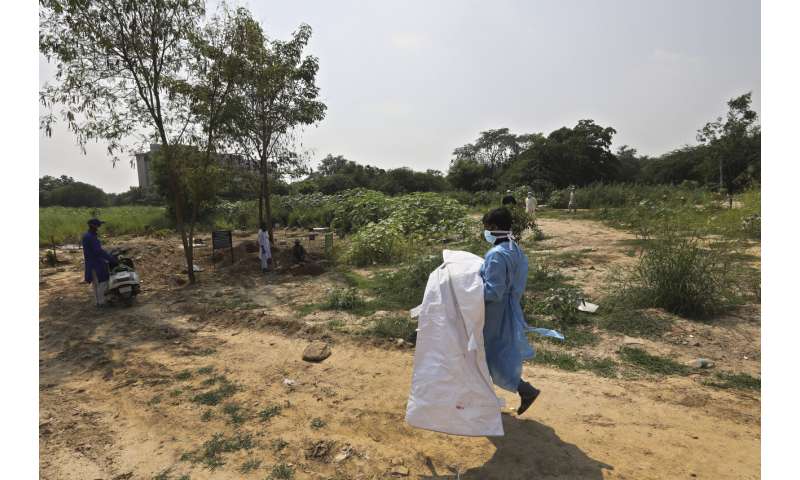 Assam state has recorded over 147,000 infections but fewer than 500 deaths as of Wednesday.

In West Bengal state, a similar panel was shelved in May and the state said it would subsequently follow federal guidelines. Of the 105 deaths of those testing positive for COVID-19 in April, the panel found found that 72, or nearly 70%, weren’t caused by the virus.

P.V. Ramesh, who until July 8 headed COVID-19 management for Andhra Pradesh state in southern India, said coronavirus deaths “at home, in transit or while arriving at hospitals don’t get counted.”

The gaps in data also mean that India’s ability to identify spikes in deaths from natural causes from previous years is spotty. Problems in death counts have raised concerns in countries like South Africa.

Meanwhile, the courts have criticized some states, like Telangana, over transparency in sharing data about fatalities. 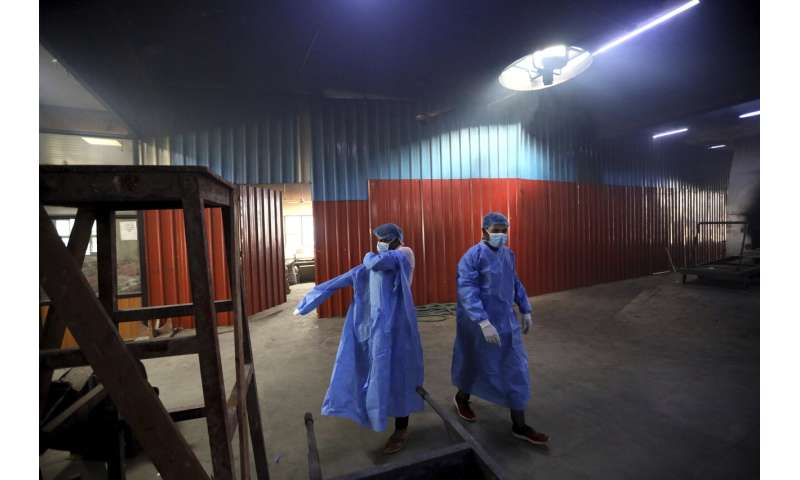 In addition, federal Health Ministry guidelines in May advised hospitals against conducting autopsies in suspected COVID-19 cases to prevent exposure to the virus. Although the guidelines say the certification can be done by doctors, experts said this also was leading to undercounting deaths.

The government’s emphasis on the low death toll despite the rising number of reported infections has resulted in people thinking the virus wasn’t necessarily fatal, leading to a “false sense of protection,” said Dr. Anant Bhan, who researches public health and ethics in the city of Bhopal. That has led to people letting their guard down by not taking precautions such as wearing masks or maintaining social distance, Bhan said.

Regional officials also felt pressure to play down deaths to show the health crisis was under control, said Dr. S.P. Kalantri, director of a hospital in Maharashtra’s rural Wardha district. Initially there were “subtle hints” from district officials to “play down the numbers” by listing some deaths as being caused by underlying diseases, he said. 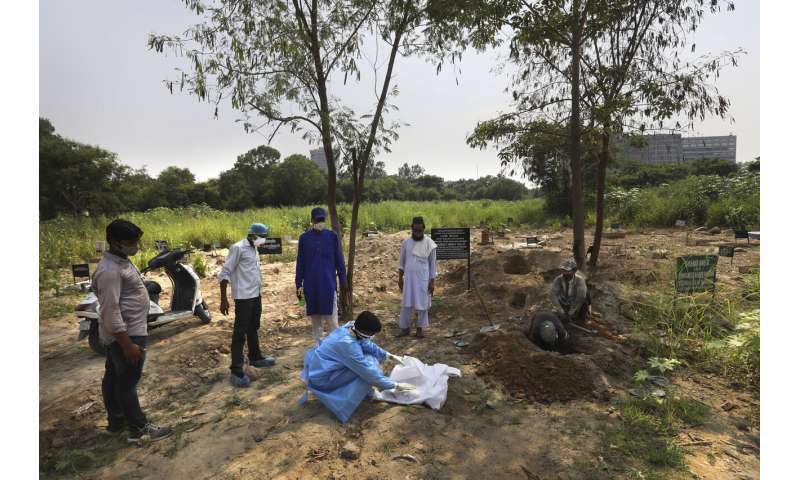 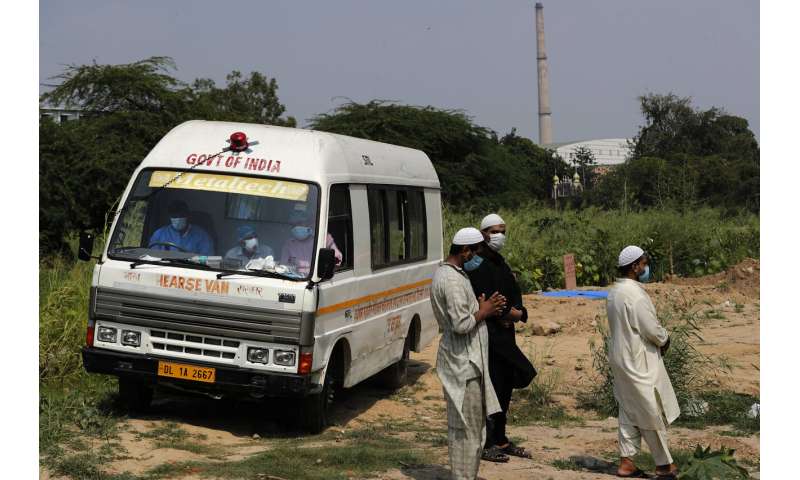 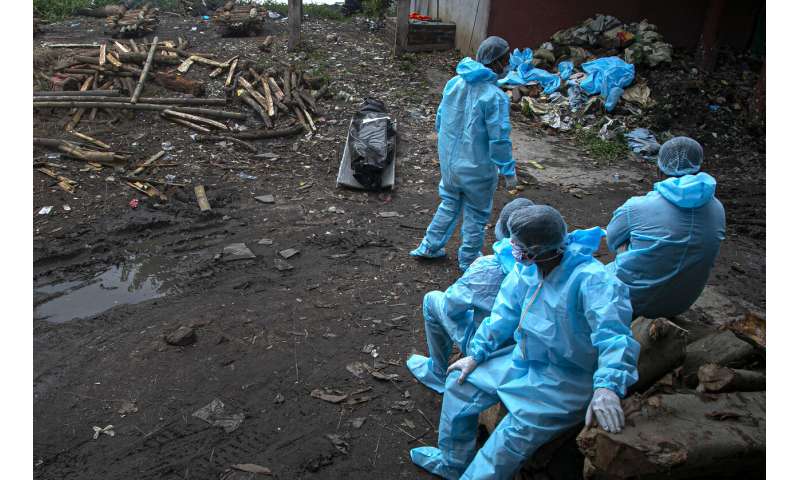 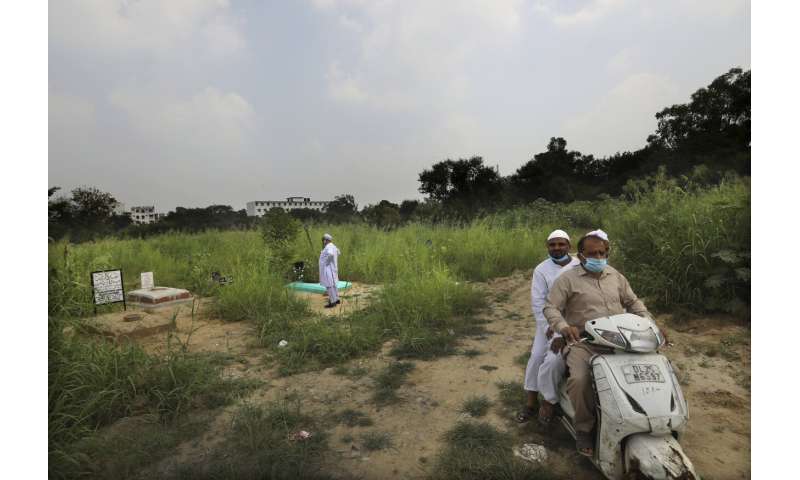 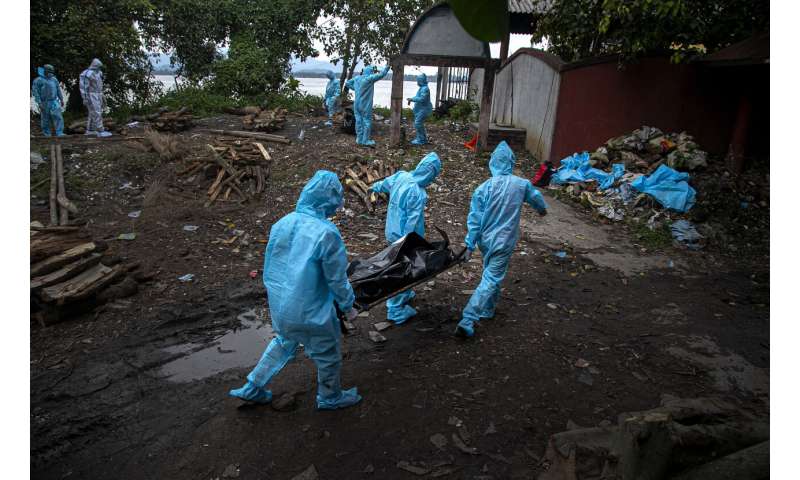 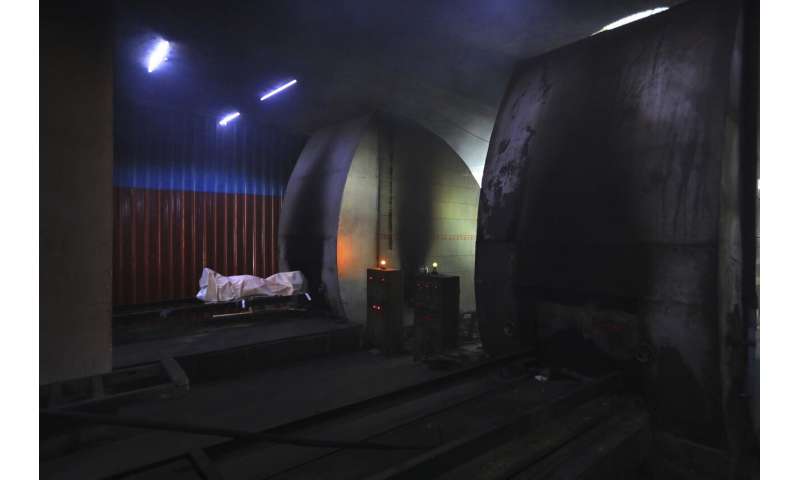 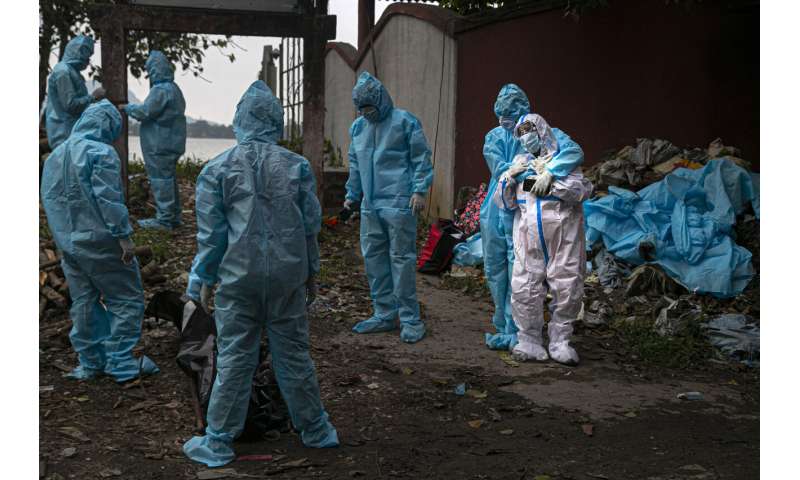 Maharashtra state health director Archana Patil said this had been a problem in some districts at first, but officials since have been advised to report all deaths.

Workers at crematoriums, meanwhile, have reported an increase in receiving bodies—whether from the virus or not.

At a crematorium in Lucknow, the capital of India’s most populous state, Uttar Pradesh, worker Bhupesh Soni said 30 people were being cremated every day, compared with five or six before the pandemic.

A cremation normally takes about 45 minutes, but Soni said there have been days when he has worked for over 20 hours.