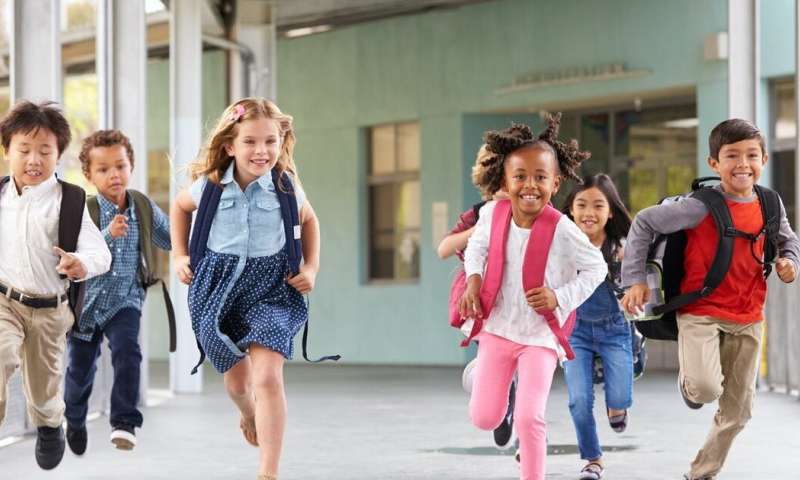 At the weekend, Victorian Premier Dan Andrews announced all the state’s primary school kids would return to school for Term 4. This is an update from the previously planned staggered return to primary school, which would begin only with students in the early years—prep (first year) to Year 2.

The change was informed by our analysis of Victorian health and education department data on all cases and contacts linked to outbreaks at schools and early childhood education and care services (childcare and preschool).

We included data between January 25 (the date of the first known case in Victoria) and August 31.

Our analysis found children younger than 13 seem to transmit the virus less than teenagers and adults. In instances where the first case in a school was a child under 13, a subsequent outbreak (two or more cases) was uncommon. This finding played a key role in helping make the decision for primary school children to return to school.

Here is what else we found.

1. Outbreaks in childcare and schools are driven by community transmission

This suggests infections in childcare, preschools and schools are driven primarily by transmission in the broader community. Controlling community transmission is key to preventing school outbreaks.

2. School infections are much lower than in the community

There were 1,635 infections linked with childcare, preschools and schools out of a total of 19,109 cases in Victoria (between January 25 and August 31).

Of 1 million students enrolled in all Victorian schools, 337 may have acquired the virus through outbreaks at school.

Of 139 staff and 373 students who may have acquired infection through outbreaks at childcare, preschools or schools, eight (four staff and four students) were admitted to hospital, and all recovered.

The infections in childcare, preschools and schools were very rarely linked to infections in the elderly, who are the most vulnerable to COVID-19.

3. Most infections in schools and childcare centers were well contained

Of all the outbreaks in Victorian childcare centers, preschools and schools, 66% involved only a single infection in a staff member or student and did not progress to an outbreak. And 91% involved fewer than ten cases.

Testing, tracing and isolation within 48 hours of a notification is the most important strategy to prevent an outbreak.

The majority of infections in childcare, preschools and schools were well contained with existing controls and rapid closure (within two days), contact tracing and cleaning.

4. Households are the main source of infection, not schools

Closing schools should be a last resort

Based on our findings and a review of the international literature, we recommend prioritizing childcare centers, preschools and schools to reopen and stay open to guarantee equitable learning environments—and to lessen the effects of school closures.

Children do transmit the virus and outbreaks can occur. But based on the international literature, this mostly happens when there are high rates of community transmission and a lack of adherence to mitigation measures (such as social distancing) at the school or childcare center.

Childcare centers, preschools and schools play a critical role not only in providing education, but also offering additional support for vulnerable students.

With childcare centers and schools being closed, along with the additional economic and psychological stress on families, family conflict and violence has increased. This has led to many children and young people feeling unsafe and left behind in their education and suffering mental-health conditions.

Closing all schools as part of large-scale restrictions should be a last resort. This is especially the case for childcare centers, preschools and primary schools, as children in these age groups are less likely to transmit the virus, and be associated with an outbreak.