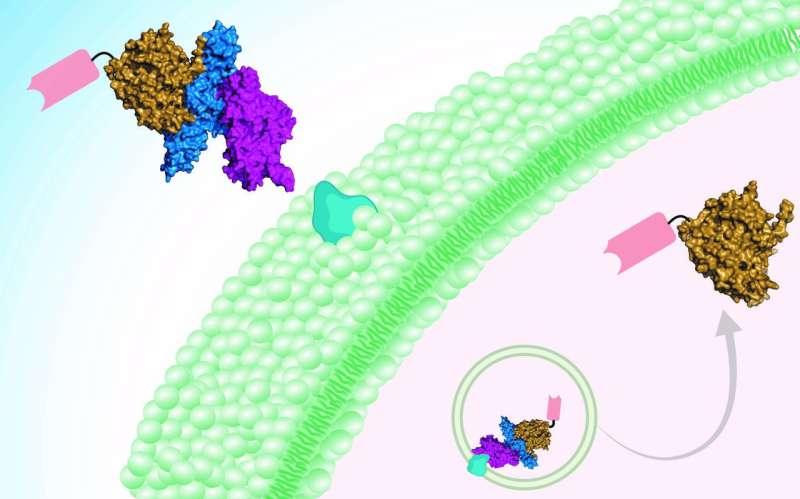 While rare, botulism can cause paralysis and is potentially fatal. It is caused by nerve-damaging toxins produced by Clostridium botulinum—the most potent toxins known. These toxins are often found in contaminated food (home canning being a major culprit). Infants can also develop botulism from ingesting C. botulinum spores in honey, soil, or dust; the bacterium then colonizes their intestines and produces the toxin.

Once paralysis develops, there is no way to reverse it, other than waiting for the toxins to wear off. People with serious cases of botulism may need to be maintained on ventilators for weeks or months. But a new treatment approach and delivery vehicle, described today in Science Translational Medicine, could change that.

“There are anti-toxins, but these only work before the toxins enter the motor neurons,” says Min Dong, Ph.D., a researcher in Boston Children’s Hospital’s Department of Urology and corresponding author on the paper. “What we have developed is the first therapy that can eliminate toxins after they get inside neurons.”

If proven in humans, the approach would represent a breakthrough in treating botulism. In mice, the treatment successfully got inside neurons, reversed muscle paralysis within hours, and enabled mice to withstand doses of botulinum toxin that would otherwise be lethal.

Letting a toxin lead the way

Dong and his colleagues needed to surmount two technical barriers that have prevented the botulism from being treated effectively in the past. Intriguingly, their solution lay in botulinum toxin itself.

“One barrier to treatment has been getting across the cell membrane, which is difficult for protein drugs,” explains Shin-Ichiro Miyashita, Ph.D., a postdoctoral fellow in Dong’s lab and first author on the paper. “The other is targeting specific cell types, and in this case specificity toward motor neurons and nerve terminals. We took advantage of the fact that botulinum neurotoxins target motor neurons naturally and efficiently, and can deliver a protein cargo across cell membranes.”

The treatment is therefore two-pronged. A botulinum toxin (detoxified through introduced mutations) is the delivery vehicle. The cargo—i.e., the active drug—is a mini-antibody derived from the antibodies of camels, developed by collaborator Charles Shoemaker, Ph.D., at Tufts University. The team showed that two of these so-called nanobodies can be delivered in tandem into neurons, neutralizing botulinum toxins type A and B at one go.

But there was one more problem to solve.

“This idea and approach had been attempted, but it was difficult to completely get rid of toxicity,” says Dong, “until we identified a new toxin, botulinum neurotoxin X, in 2017. Unlike other botulinum toxins, this new toxin shows no toxicity after we introduce mutations, and serves as a safe delivery tool.”

Besides botulism, Dong thinks the new treatment could be useful as a “botox reversal” agent. Botox injections, using tiny quantities of the type A botulinum toxin, can safely treat wrinkles and many other medical conditions like neck spasms, excessive sweating, or overactive bladder. However, when the injection goes awry, botox can cause unwanted muscle paralysis as a side effect, and patients have to live with the paralysis for months.

“We can potentially inject our therapeutic protein and get rid of botox in neurons and paralysis within a few hours,” Dong says.

The toxin-guided approach may offer a platform for getting biologic drugs into neurons to treat other disorders, Dong believes. Currently, most biologic drugs act only on cell-surface targets and cannot get into the cell’s interior.