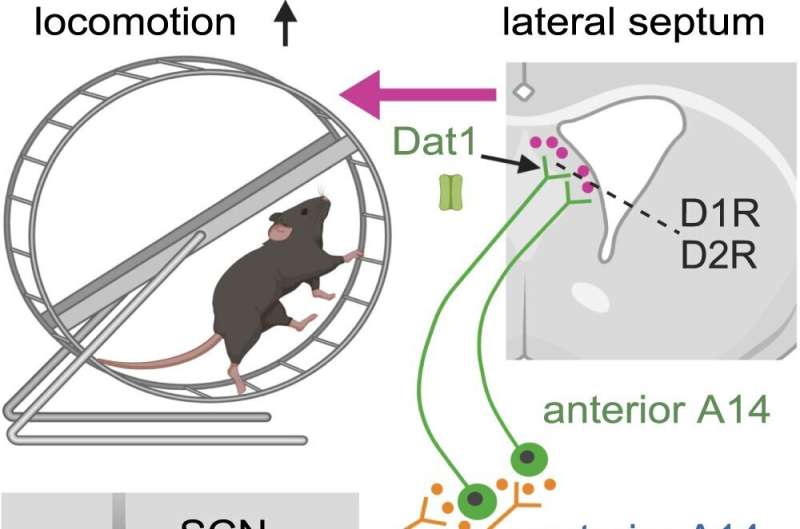 A research team of the Center for Brain Research at the Medical University of Vienna has identified a specific cell group in the brain responsible for shifts in the sleep-wake rhythm caused by psychostimulants. A molecularly-defined cell population of the hypothalamus constitutes a point of control in the regulation of the circadian rhythm in the brain and gates the effect of psychostimulants through its activity. Through this neural mechanism, psychostimulants can cause an increase in alertness and activity, even during circadian periods of rest and sleep.

The circadian rhythm is the ability of animals to synchronize their physiological processes over a period of about 24 hours. This includes the sleep-wake rhythm as a central regulatory element. The center for controlling this brain function is located in the hypothalamus. People with irregular sleep-wake cycles, whether due to nocturnal activity or jet lag, often use psychostimulants to compensate the circadian shifts and correct their sleep rhythms.

The research team led by Tibor Harkany and Roman Romanov of the Department of Molecular Neuroscience at the Center for Brain Research of the Medical University of Vienna has now been able to identify a molecularly defined cell group (Th+/Dat1+) in the hypothalamus that is responsible for the circadian changes in activity patterns triggered by psychostimulants. Some people with chronic disturbances of their daily rhythms, such as pilots, are known to use the psychostimulant amphetamine in order to be able to stay awake and be active even during their biologically predetermined rest periods.

Now published in Nature Communications, the new study by the team of Tibor Harkany and Roman Romanov tested and characterized this effect in a mouse model.

To this end, chemogenetic, optogenetic and behavioral methods were used to identify the group of cells in the hypothalamus that respond directly to the stimulants. The research team further revealed the functional circuitry in which these cells are embedded. They were able to identify the lateral septum, an area of the brain that regulates autonomic processes and is involved in the control of locomotion, as another important brain area involved in the regulatory processes induced by amphetamines.

“We could define a new region of the brain that is the lateral septum, which is involved in circadian rhythms via activity of dopamine receptors, where psychostimulants can exert their stimulatory effects. If the receptors there are inhibited or stimulated, it directly influences the activity of the organism,” Roman Romanov explains