‘It’s a race against time’: Brothers, 13 and 9, with rare ‘Benjamin Button disease’ have captured the hearts of millions in their fight to survive

There are just three people in America with a rare form of the terminal rapid-aging disease progeria.

Two of them are brothers Nathan and Bennett Falcone, a dynamic pair who dab, play and joke just like any other kids their age.

Nathan, 13, and Bennett, soon to turn 10, both have mandibuloacral dysplasia type B, the rarest form of a genetic condition that accelerates the aging of their cells to such an extent that sufferers have an approximate life expectancy of 13.

But these two, who live in Erdenheim, Pennsylvania, with their parents and sister, refuse to sit back: they have just completed a clinical trial of a drug that has been shown to dramatically slow the progression of the disease.

What’s more, their captivating personalities have galvanized their entire community to push for research to find better treatments – and even a cure. 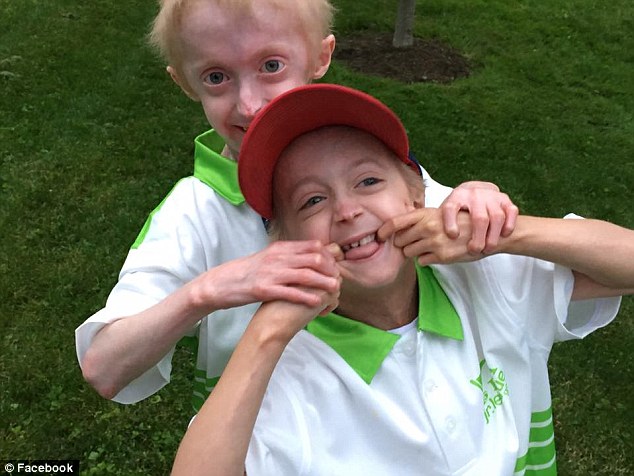 Fun kids: Nathan and Bennett Falcone are the playful brothers bringing their community in Pennsylvania together to fight for research into progeria, their rare rapid-aging disease 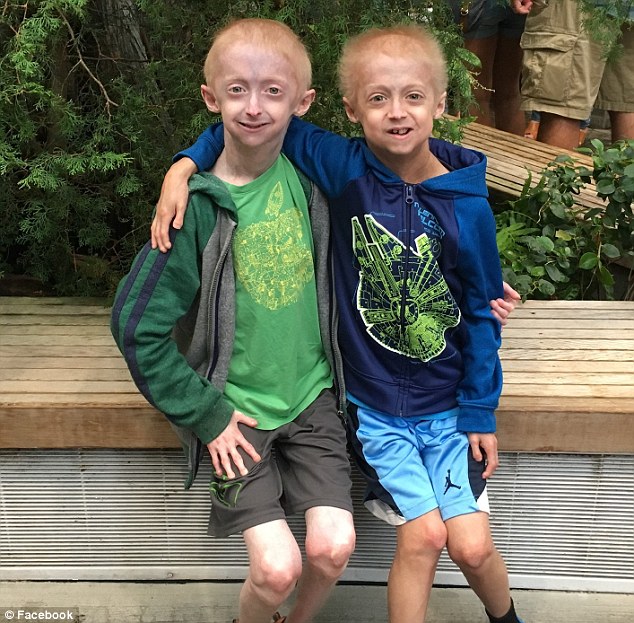 The boys (Nathan, 13, and Bennett, nine) are remarkably resilient thanks to clinical trials 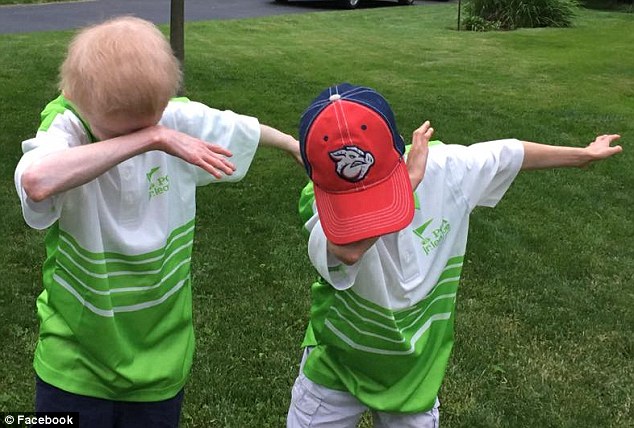 They play, joke and dab like all other kids their age, touching the hearts of people around them

Progeria is a progressive genetic disorder that causes children to age rapidly, beginning in the first two years of their life.

Children with progeria do not have any differing features at birth or during their first year, but as they reach two signs and symptoms such as slow growth and hair loss begin to appear.

Over time, their physical distinctions become more obvious: they remain much smaller than their peers, bald and frail. Progeria does not affect intellectual development.

The specific type that Nathan and Bennett have (MADB) affects the development of the lower jaw, ends of the fingers, and the skin. It is caused by a recessive gene that affects zinc levels.

Typically, progeria sufferers die of a heart attack or stroke, the most common age-related cause of death. As with elderly people, their cholesterol levels rise, their arteries harden, and their hearts struggle to pump blood in the same way as before – only that this all happens in their teens, rather than their 80s.

Nathan, though, is doing remarkably well at the age previously believed to be his ceiling. 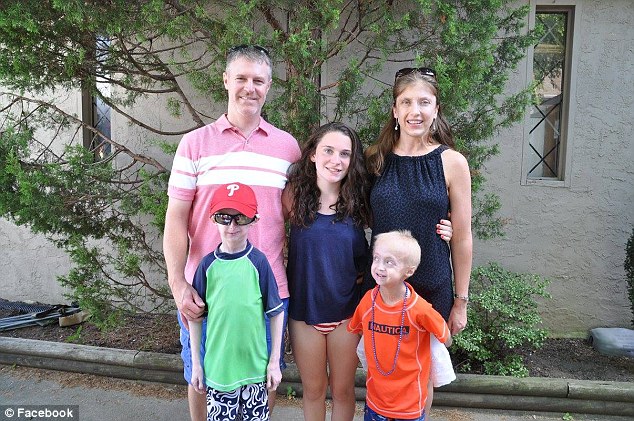 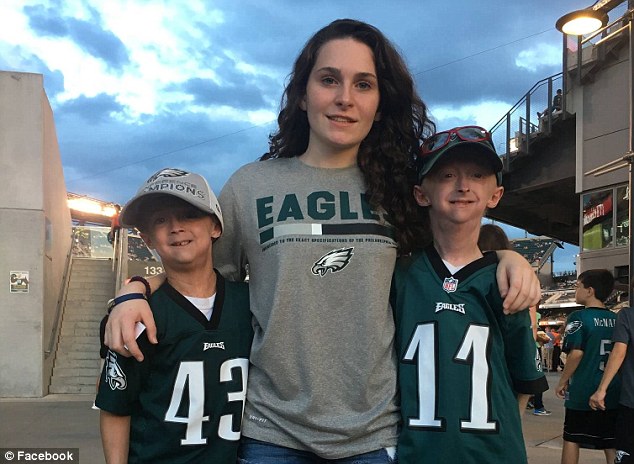 Despite some spikes in cholesterol, the boys are doing well and don’t have to return to their Boston doctors for four years

Both he and Bennett have been taking experimental FTI lonafarnib most of their lives, which has helped with weight gain and controlling their blood pressure, and two years ago they started a clinical trial for a new one, everolimus.

Despite seeing some spikes in cholesterol, both are expected to be going strong for at least another four years.

Even more heartening, their family has touched the hearts of their community, who rally around regularly to hold fundraisers for more research.

Researchers struggle to get funding, since progeria only affects one in six million children. Investors prefer to fund something with marketable ‘results’. Leukemia, for example, (one of the most treatable cancers) receives the vast majority of cancer research funds, while DIPG (the least treatable) receives barely any.

Speaking at a recent fundraiser in their town, though, their mother Phyllis explained to Chesnut Hill Local why progeria research should matter to everyone.

It’s a rapid aging disease, she explained. The general population is aging. Heart disease (which typically kills progeria sufferers) is the biggest killer in the world. Research is the only way to save their boys’ lives. It may also help others, even without progeria.

‘It’s a race against time to find a cure,’ Phyllis told Chesnut Hill. 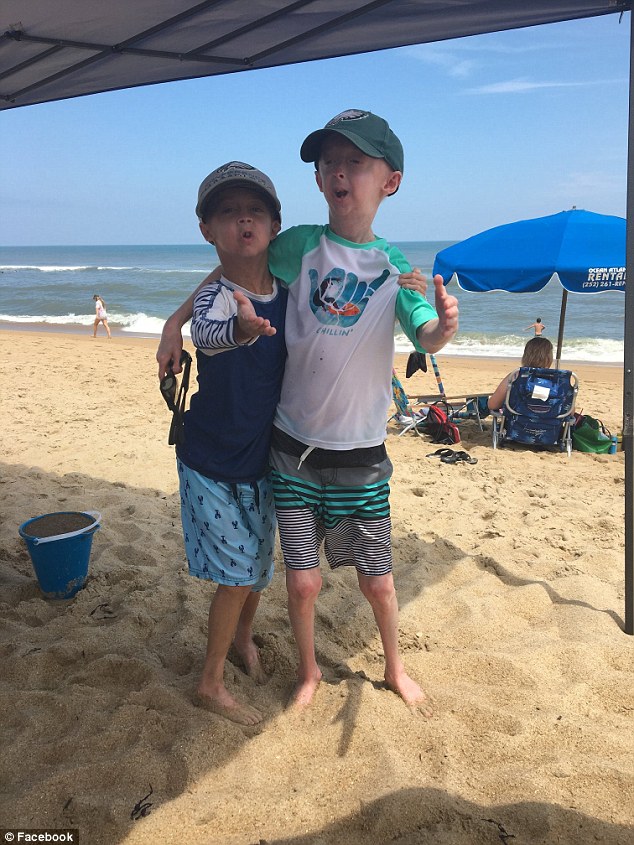 She added: ‘One of Nathan’s arteries to his heart is mildly dilated, so we have to have him followed by cardiology to make sure it doesn’t get worse.’

But based on their latest assessments, the doctors running their clinical trial in Boston said they don’t need to return for four years while they keep taking their current drug.

Phyllis put that in perspective in an emphatic email to Chesnut Hill: ‘FOUR YEARS!! In a race against time that seems like a long time!’

Ultimately, though, such progress is, at least for now, always bitter-sweet.

‘[S]ome good news and some bad news,’ she told the paper, ‘but it’s always emotional to focus on progeria, hear words like ‘mortality,’ see our kids go through all the testing and hearing all of what is ‘wrong’ with our boys when there are so many things RIGHT!’