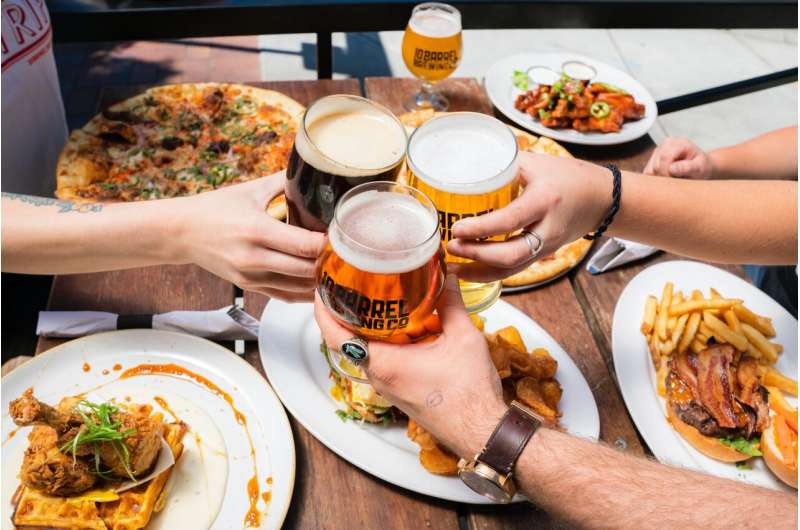 “How much have you had to drink?” might seem like a simple question, but it is not always easy to answer. Although there are general guidelines about responsible alcohol consumption, a person’s level of intoxication depends not only on the number of drinks they consume but also on the alcohol content of those drinks and other factors.

In a new article in Alcoholism: Clinical and Experimental Research, researchers in Penn State’s Department of Biobehavioral Health demonstrated how wearable sensors can augment researchers’ understanding of when drinking will lead to negative consequences. The researchers measured intoxication with an ankle bracelet that can detect alcohol concentration from imperceptible amounts of sweat.

“Understanding how much alcohol you have consumed is nuanced,” Russell said. “For example, if Person A drinks a 16-ounce pint of craft beer with a 10% alcohol content, Person B drinks a 12-ounce can of light beer with a 4% alcohol content, and Person C drinks a large mixed drink made with several types of liquor, how many drinks have they all had? What if Person A weighs 110 pounds, Person B 220 pounds, and Person C 185 pounds? Does the answer change?

Measuring intoxication through the skin

Sensors that measure alcohol concentration through the skin, known as transdermal alcohol-concentration sensors, provide more data than periodic breathalyzer results or self-reported drinking measurements. Sensors can record a person’s peak intoxication level, the rate at which someone becomes intoxicated, and how much alcohol was in their system and for how long.

Additionally, transdermal sensors are less burdensome than other available methods for measuring intoxication. Breathalyzers and blood sample analyses require active cooperation by the person being measured and can be intrusive. Transdermal sensors, however, are passive and unobtrusive, requiring no input from the wearer.

Breathalyzers and transdermal sensors have different applications. Alcohol in sweat is eliminated more slowly than it is through breath. The amount of alcohol in a person’s breath is nearly identical to their blood alcohol content, though the amount of alcohol in sweat lags slightly behind at any given point in time. This means that breathalyzers provide a more accurate instantaneous reading of someone’s intoxication during a traffic stop. Transdermal sensors, on the other hand, provide a more nuanced understanding of a person’s entire drinking event. Breathalyzers do not capture how much a person drank, how quickly they drank, and how long alcohol remained in their system, and transdermal sensors capture all of that.

This study also demonstrated an intuitive finding about intoxication: when a person becomes intoxicated by consuming the same amount of alcohol on two different days, that person is more likely to suffer negative consequences on the day that they became more intoxicated. In other words, if a person had six drinks on Friday and six equivalent drinks on Saturday, they would be more likely to experience consequences if their peak intoxication were higher on one of those days. Peak intoxication can be affected by several factors, including how fast a person consumed alcohol and what they had eaten recently.