Prozac may be driving the antibiotic-resistance crisis

Commonly-prescribed antidepressant Prozac may be driving the antibiotic-resistance crisis

The commonly-prescribed antidepressant fluoxetine, which appears under the brand name Prozac, may be driving the antibiotic-resistance crisis, new research suggests.

When E.coli, which can cause food poisoning, is exposed to fluoxetine, the bacteria undergoes genetic mutations that stop it responding to common antibiotics, a study found. E.coli leads to life-threatening kidney damage in up to 10 per cent of cases.

According to the researchers, up to 11 per cent of fluoxetine passes through a person’s body unchanged before entering sewage systems via urine.

Experts have previously warned antibiotic resistance poses ‘as big a risk as terrorism’.

A lack of new drugs combined with overprescribing is thought to have driven the resistance crisis, which, according to the World Health Organization (WHO), ‘has the potential to affect anyone, of any age, in any country.’ 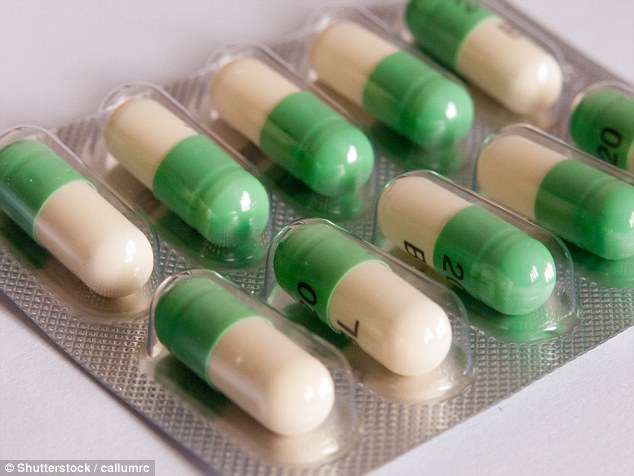 The commonly-prescribed antidepressant fluoxetine, which appears under the brand name Prozac, may be driving the antibiotic-resistance crisis, new research suggests (stock)

The researchers, from the University of Queensland, exposed an E.coli strain to fluoxetine doses ranging from 0.5 to 100mg/L for 30 days in the lab.

This caused the bacteria’s genes to mutate, making the pathogen resistant to the commonly-prescribed antibiotics chloramphenicol, amoxicillin and tetracycline. These drugs are often used to treat skin, respiratory and urinary tract infections.

Results, published in the journal Environment International, further suggest the greater the fluoxetine dose E.coli is exposed to, the higher the rate of antibiotic resistance.

In addition, compared to bacteria that are not exposed to the antidepressant, those that spend 30 days with fluoxetine have up to 50 million times higher rates of resistance.

Fluoxetine is also prescribed under the brand names Prozep, Olena and Oxactin in the UK, and Rapiflux, Sarafem and Selfemra in the US.

WHAT IS ANTIBIOTIC RESISTANCE?

Antibiotics have been doled out unnecessarily by GPs and hospital staff for decades, fueling once harmless bacteria to become superbugs.

The World Health Organization (WHO) has previously warned if nothing is done the world is heading for a ‘post-antibiotic’ era.

It claimed common infections, such as chlamydia, will become killers without immediate solutions to the growing crisis.

Bacteria can become drug resistant when people take incorrect doses of antibiotics or if they are given out unnecessarily.

Chief medical officer Dame Sally Davies claimed in 2016 that the threat of antibiotic resistance is as severe as terrorism.

Figures estimate that superbugs will kill 10 million people each year by 2050, with patients succumbing to once harmless bugs.

Around 700,000 people already die yearly due to drug-resistant infections including tuberculosis (TB), HIV and malaria across the world.

Concerns have repeatedly been raised that medicine will be taken back to the ‘dark ages’ if antibiotics are rendered ineffective in the coming years.

In addition to existing drugs becoming less effective, there have only been one or two new antibiotics developed in the last 30 years.

In September, the WHO warned antibiotics are ‘running out’ as a report found a ‘serious lack’ of new drugs in the development pipeline.

Without antibiotics, C-sections, cancer treatments and hip replacements will become incredibly ‘risky’, it was said at the time.

The researchers stress people should not stop taking their prescribed antidepressants but add their findings should be investigated to determine if such antibiotic resistance occurs outside of the lab.

Speaking of the resistance crisis, Professor Sean Brady, from The Rockefeller University, New York, previously said: ‘Despite the wide availability of antibiotics, infectious diseases remain a leading cause of death worldwide.

‘In the absence of new therapies, mortality rates due to untreatable infections are predicted to rise more than tenfold by 2050.’

The WHO has also classified antimicrobial resistance as a ‘serious threat’ to every region of the world.

Penicillin, the first and most famous antibiotic, was discovered by the Scottish microbiologist Alexander Fleming in 1928.

Yet, less than a century after Fleming’s discovery, there are precious few antibiotics left and many superbugs are already resistant to all of them.

Figures suggest up to 50,000 people die each year due to antibiotic-resistant infections in Europe and the US alone.

Globally, at least 700,000 people pass away annually due to antibiotic-resistance complications from illnesses such as malaria, AIDS and tuberculosis.

An Englishman who caught the ‘world’s worst’ case of super-gonorrhoea was cured in April 2018 with a last-ditch antibiotic.

In the first recorded case worldwide, the unidentified man caught a version of the sexually transmitted infection (STI) that was resistant to two crucial drugs.

Health officials revealed he caught it from a one-night stand with a woman during his travels to south east Asia earlier this year – despite having a girlfriend in the UK.

Public Health England (PHE) issued a warning over the the STI, which is resistant to ceftriaxone and azithromycin – the two drugs recommended for gonorrhoea.

In a statement, the Government agency revealed the man – whose location has also been withheld – was cured with the antibiotics ertapenem.

Dr Gwenda Hughes, head of STIs at PHE, said: ‘We are pleased to report the case of multi-drug resistant gonorrhoea has been successfully treated.

‘Investigations have also revealed there has been no further spread of this infection within the UK.’

Dr Hughes did warn that ‘we expect to see further cases of multi-drug resistant gonorrhoea in the future’.

World Health Organization (WHO) experts raised fears two years ago the STI, once known as the ‘clap’, could become immune to antibiotics in a ‘matter of years’.

The WHO recommends patients are given ceftriaxone and azithromycin to combat gonorrhoea, the third most common STI in Britain.

Officials said: ‘This is the first global report of high-level azithromycin resistant N. gonorrhoeae which is also resistant to ceftriaxone.’