Skip to content
HomeHealth NewsCould THIS stop you from ever getting fat?

A tale of two mice: Both have been fed a diet of burgers and pizza but the one on the right is still SLIM and scientists say the secret could stop you from getting fat!

It may sound like fantasy – but you could soon eat burgers, chips and pizzas every day without getting fat.

For scientists have defied biology and uncovered a way to stop mice on a junk-food heavy diet from becoming obese.

Danish researchers claimed it was ‘impossible’ for the rodents to put on weight by deleting a certain enzyme in their fat.

In preliminary trials, mice were fed a diet that ‘more or less’ corresponds to eating burgers and pizza for 12 weeks. When fed high-fat food, the ‘normal’ mice became very obese (left). The experimental mice gained no more weight than they did in the other diet (right) over 12 weeks

Experts now hope to use the findings to tackle the growing obesity crisis, which has been branded a ‘disturbing global public health crisis’.

The epidemic is costing the NHS more than £1 billion a year – around a tenth of its budget – on obesity-driven conditions, such as type 2 diabetes.

The startling figures have been condemned by campaigners, who have repeatedly argued it is ‘lunacy’ to spend so much on obesity, which can be prevented.

But the new study offers hope of finding a way to combat bulging waistlines. Figures suggest nearly a third of the world’s population are overweight.

Copenhagen University researchers genetically deleted the NAMPT enzyme in the fat tissue of mice. They were compared to ‘normal’ mice.

An analysis of both sets of mice following a healthier, lower-fat diet revealed there was no difference in their body weight after 12 weeks.

But when fed high-fat food, the ‘normal’ mice became very obese. The experimental mice gained no more weight than they did in the other diet.

An analysis of mice following a healthier, lower-fat diet revealed there was no difference in their body weight after 12 weeks (HFD = high fat diet, FANKO are the genetically engineered mice, control is the normal group) 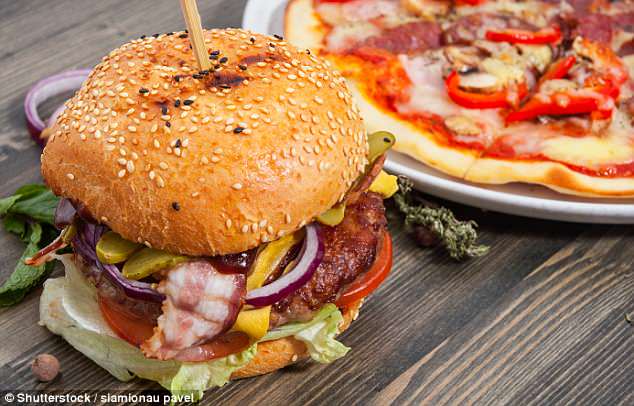 Karen Nørgaard Nielsen, lead author, said: ‘We gave the mice a diet that more or less corresponds to continuously eating burgers and pizza.’

‘Still, it was impossible for them to expand their fat tissue,’ the PhD student added. The findings were published in the journal Molecular Metabolism.

The ‘ultimate goal’ was to use the results to develop treatments for managing obesity and stop it spiralling out of control, she added.

The Western diet is loosely defined as one full of fatty and sugary foods, such as burgers, fries and soda.

People often eat foods that are high in

Health effects have been linked to things such as hypertension, heart disease, diabetes, obesity, colorectal cancer and dementia.

The findings back-up an array of human trials, which have shown a consistent link between high levels of the enzyme and obesity.

However, the researchers claimed this is the first evidence that a lack of NAMPT in fat tissue can ‘fully protect’ against obesity.

The study challenges the general view of NAMPT, largely seen as an enzyme that should be boosted for therapeutic purposes.

Dr Zachary Gerhart-Hines, co-author of the study, added that NAMPT is ‘critical’ for fat tissue function – but is ‘unfortunately’ storing fat.

He continued: ‘NAMPT in fat tissue was likely once an extraordinary benefit to our ancestors. But, in today’s society… it may now pose a liability.

However, Dr Gerhart-Hines does not necessarily believe decreasing NAMPT levels is a viable treatment strategy for humans.

This is because it increases the metabolic function of ‘almost every tissue in the body’, and evidence some organs need high levels.

It comes after a landmark study, published in the New England Journal of Medicine, revealed the true burden of obesity around the world.