A woman who had a quirky walk when she was a toddler was diagnosed with arthritis aged two.

Alex Delameilleure, 21, from Hertford, was diagnosed with juvenile idiopathic arthritis (JIA), of which the cause is unknown.

Her parents initially adored the way she walked around on the balls of her feet, thinking she was pretending to be in high heels.

The condition, which caused her hands, knees and even jaw to swell, made everything from her hobbies to school work exhausting.

Doctors gave Miss Delameilleure hope that she would grow out of the condition by adulthood, so she threw herself into performing arts.

But medication left her feeling sick, meaning she took time off school – where she already felt ‘mortified’ by special chairs and shoes for her condition. 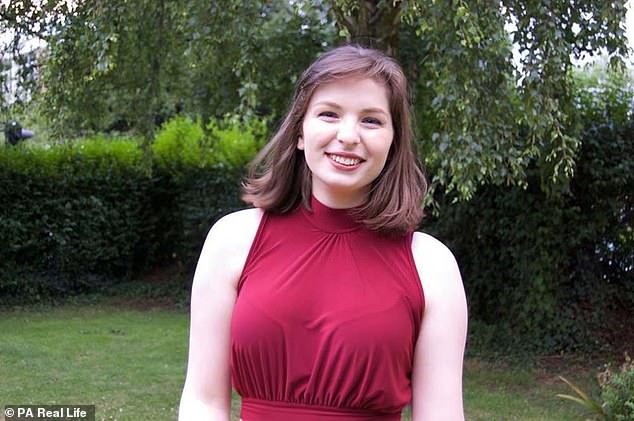 Alex Delameilleure, 21, from Hertford, was diagnosed with juvenile idiopathic arthritis (JIA), of which the cause is unknown, when she was two years old 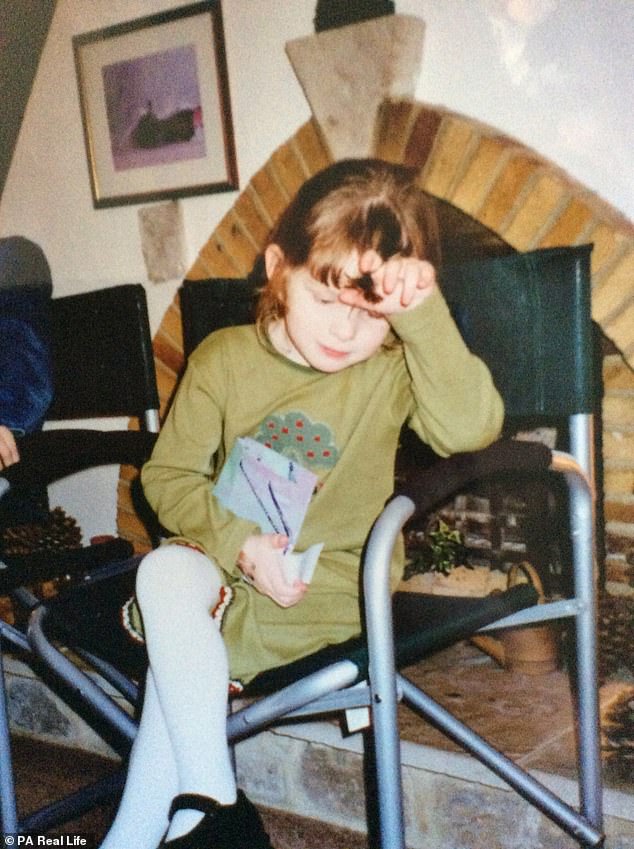 Miss Delameilleure’s parents initially adored the way she walked around on the balls of her feet as a toddler, thinking she was pretending to be in high heels. Pictured when she was a child 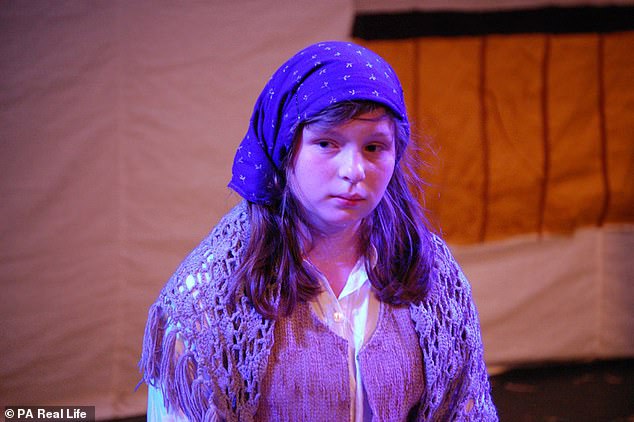 Miss Delameilleure’s hopes of becoming a professional performer were slashed when she couldn’t keep up with her hobbies. Pictured in a play as a child

Now, with any hopes of performing professionally in musicals slashed, Miss Delameilleure is studying politics.

She said of her arthritis: ‘It’s definitely impacted on my life in more ways than just aches and pains.

‘I’ve always loved musical theatre, but any dreams I had of becoming a performer have been quashed.’

When Miss Delameilleure was a toddler, her mother Trudi Delameilleure, 49, an accounts administrator, and father Jamie Delameilleure, 52, a builder, initially thought their little daughter’s unusual and dainty way of walking was nothing to worry about.

‘They thought it was just a quirk, like I was imitating someone walking round in high heels,’ Miss Delameilleure explained.

But six months later, they decided to ask the opinion of a family doctor, who confirmed there was something more sinister at work and gave the crushing diagnosis of JIA.

JIA is an autoimmune disease, where the body creates inflammation in a joint or joints when it doesn’t need to, causing stiffness and pain.

There are many different types of JIA, some of which are milder than others, and although researchers are still trying to find the cause of the condition, they believe it is a mixture of genetics and environment.

Throughout primary school Miss Delameilleure needed to wear special boots, with Velcro on top, that had ankle and arch support.

She recalled: ‘Having Velcro fastening shoes back then was a big deal, it automatically made you uncool.

‘I was desperate for a pair of lace-up pumps like all my friends, but sadly it wasn’t meant to be.’

When she was in year three, aged seven, Miss Delameilleure was given a custom-built ‘adapter chair’ to sit on at school, as it put less pressure on her joints.

She said: ‘The chair was bright red and took up twice the space of a regular school chair.

‘I remember the first time I saw it – I was absolutely mortified.’

Out in the playground, Miss Delameilleure faced difficulties too, adding: ‘Anything more strenuous than hopscotch would leave me utterly wiped.’

Miss Delameilleure’s aches and pains were so bad, she was left unable to write up her notes at school, and regularly had to have days off in bed. When Miss Delameilleure was a toddler, her mother Trudi Delameilleure, 49, and father Jamie Delameilleure, 52, initially thought their little daughter’s unusual and dainty way of walking was nothing to worry about. Pictured, as a child with Mr Delameilleure 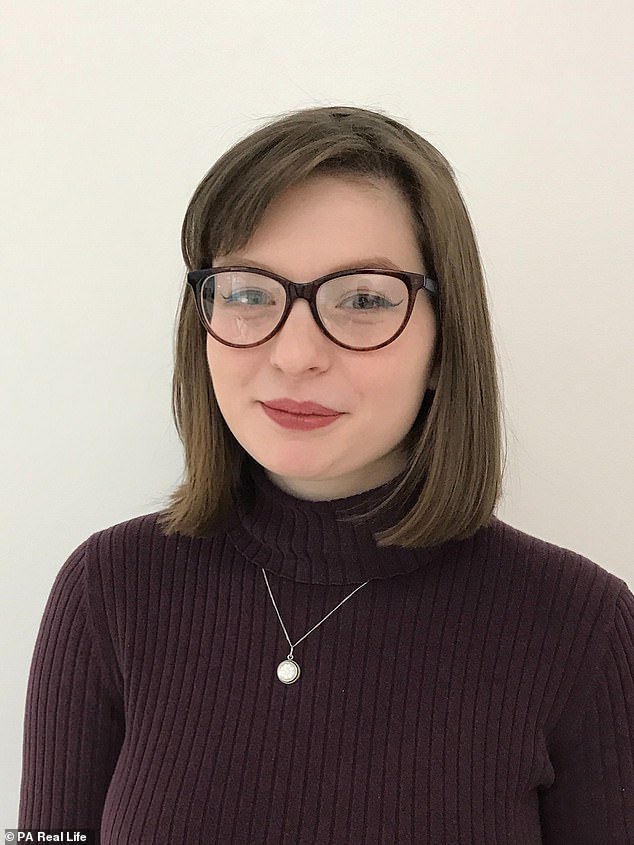 Doctors gave Miss Delameilleure hope that she would grow out of the condition by adulthood. But unfortunately she did not. Pictured recently 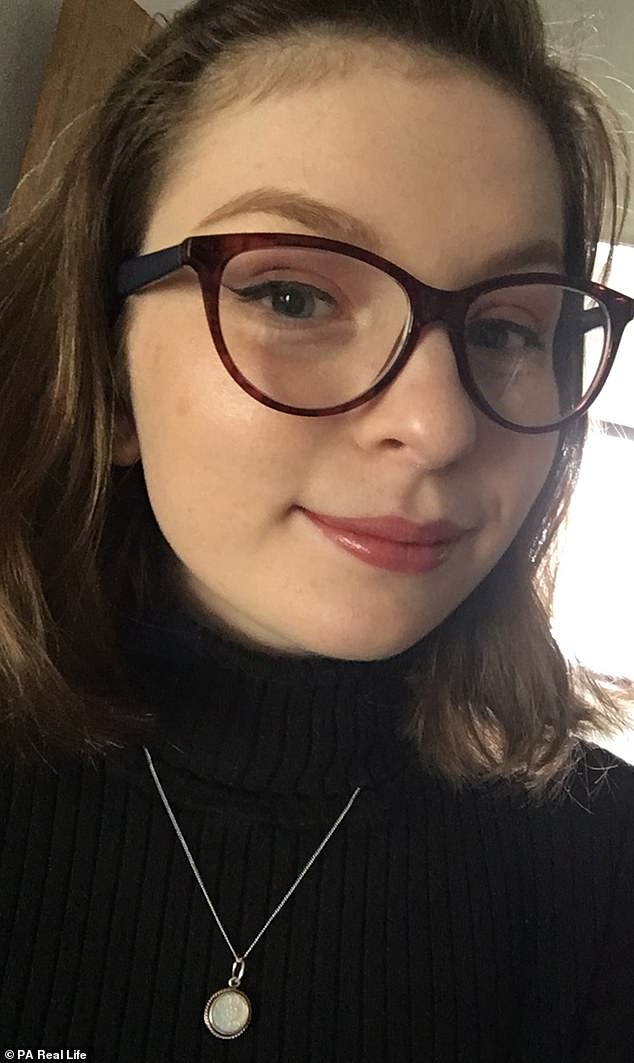 The condition, which caused her hands, knees and even jaw to swell, made everything from her hobbies to school work exhausting. Miss Delameilleure pictured recently

Miss Delameilleure had been told by doctors that she might grow out of her arthritis once she reached adulthood.

Many children who have JIA won’t have any symptoms when they’re adults. But in at least 30 per cent of cases, arthritis can remain active into adult life.

Miss Delameilleure said: ‘Once I hit my 20th birthday I realised that my arthritis was here to stay.

‘I was gutted at first but I’m very lucky, my condition is managed well, and now I suffer with localised inflammations more than anything else.’

For Miss Delameilleure, ‘localised inflammations’ mean that particular joints are affected more than others, depending on how often they are used.

For example her thumb might flare up during revision periods where she is writing a lot.

‘One month it can be my knees, the next my ankle or even my jaw,’ she explained.

Since her initial diagnosis, Miss Delameilleure has seen a lot of fluctuations and changes in her medication, and has been treated with pills, injections and oral medications.

The dosage has been adjusted up and down too, with most changes due to adverse side effects like sickness, tiredness and poor liver function.

Miss Delameilleure added: ‘I was quite prone to flare ups when I was younger, so have had quite a few courses of steroids and steroid injections in my joints to improve the condition.’

Determined to keep up with her friends, music-loving Miss Delameilleure began dancing aged five, and grew up imagining she would one day become a professional, taking to the stage in musicals.

From the age of 11, Miss Delameilleure’s focus shifted on to singing, choir and musical theatre classes, to which she would dedicate four hours a week in school, and five hours a week out of school.

But gradually Miss Delameilleure had to face up to her condition.

She said: ‘Come show week I would basically leave school, eat food, head to the theatre and then be home at about 11pm after performing. 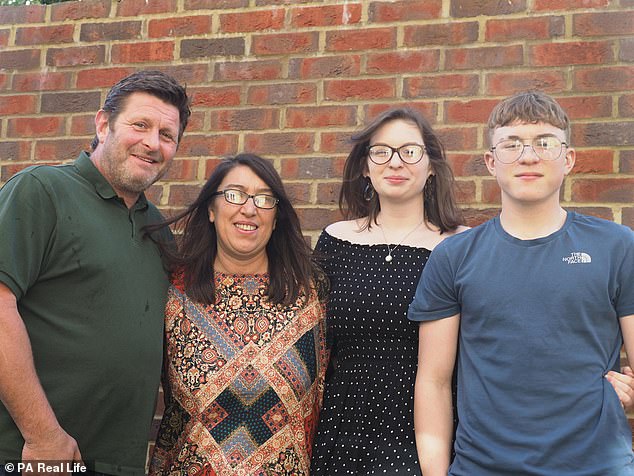 Seeing what her brother Gene, pictured right, who is six years younger, could do was a constant reminder of the limitations Miss Delameilleure, pictured with her parents, faced 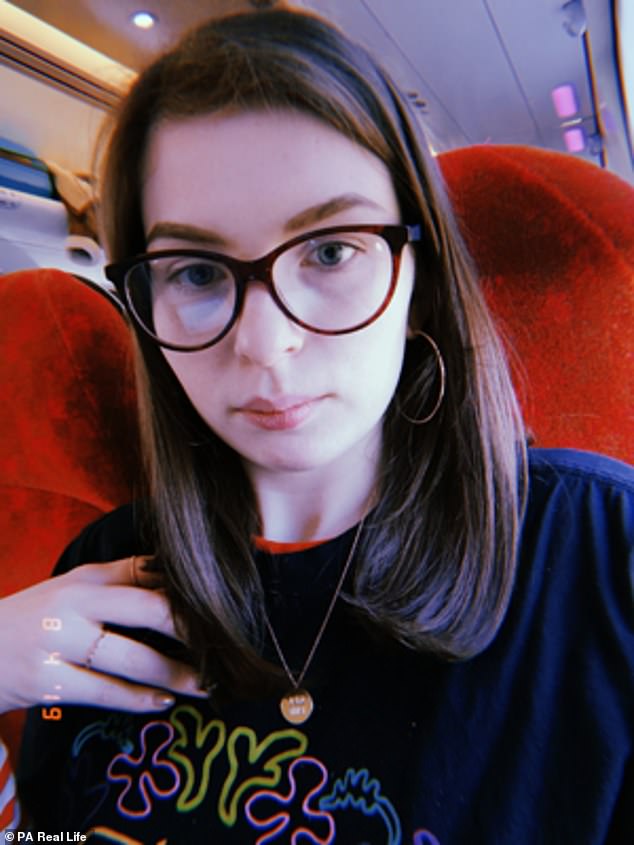 Miss Delameilleure’s aches and pains were so bad, she was left unable to write up her notes at school, and days off in bed were a regular occurrence. Pictured recently

‘I simply wasn’t flexible enough to carry out even some of the simplest moves, even the warm-up and flexes would come back to haunt me the next day.

‘I started taking anti-sickness tablets during the earlier years of secondary school because the treatment at the time was making me quite ill.

‘Throw in my weakened immune system and constant aches, and I was doomed to fail before I’d even started.’

Seeing what her brother Gene, who is six years younger, could do was a constant reminder of the limitations Miss Delameilleure faced.

She said: ‘My brother is the opposite of me in so many ways, as he’s super sporty and is a member of the local boxing gym.’

Finally, when she was 16, Miss Delameilleure threw in the towel for good.

She said: ‘I was forever having to skip classes that were too strenuous and miss out on parts of rehearsals.

‘Then, after my last performance as part of the chorus, it finally dawned on me I was never going to have a career in theatre.’ 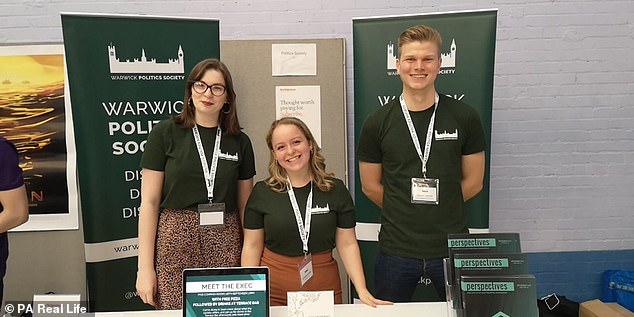 Miss Delameilleure, who spent freshers’ week unable to join in with social nights out because of medication, joined the politics society at her university 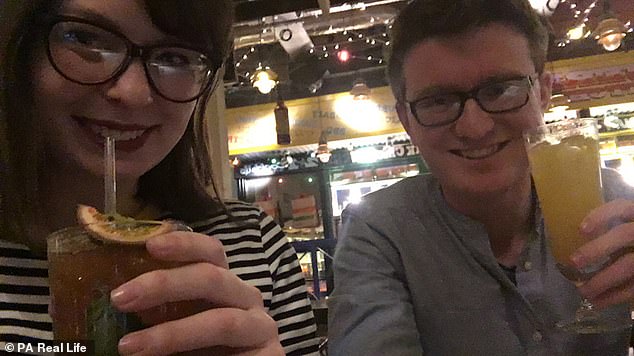 Miss Delameilleure, who met her boyfriend Jack, 21, at Warwick University, where she studies politics, stopped dreaming of becoming a professional performer at the age of 16 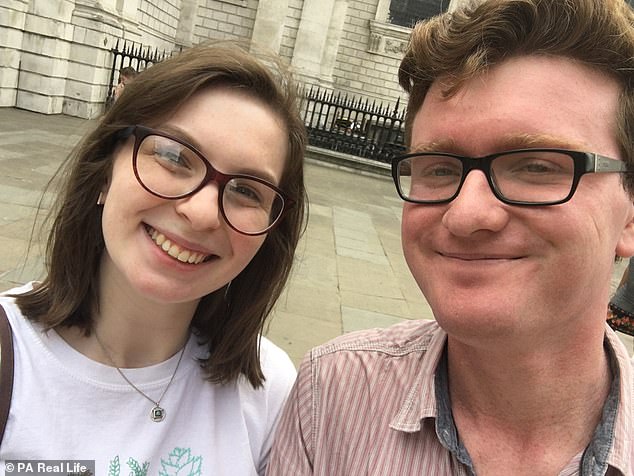 Miss Delameilleure, who was mortified to have to wear special shoes and sit in a special chair at school, said: ‘I’ve tried my best to live a normal student life, but it’s not always been possible.’ Pictured with her boyfriend

Unable to go to school at times due to the sheer pain, Miss Delameilleure would spend days sat in front of the telly watching nothing but current affairs programmes, where she got a taste for politics.

Miss Delameilleure, who is currently in her third year of university, took up the subject at A-level, before going on to study it at undergraduate level at Warwick University.

But living a normal student life hasn’t been possible, and she spent freshers’ week unable to join in with social nights out because of medication.

She met her boyfriend, Jack, 21, at a Politics Society social, and said: ‘I told him straight away not to expect romantic walks down the beach or adventurous days out exploring.

‘Luckily, he’s super supportive and two years on, we’re as strong as ever.’

After taking part in work experience with arthritis charity Versus Arthritis last year, Miss Delameilleure has gained more confidence to open up about her condition.

She said: ‘Arthritis is not just an old person’s disease and now I’ve got the confidence to tell people that.

‘So many young people suffer from the condition and it’s never spoken about.

‘People think that being diagnosed with arthritis is one step away from being put into a nursing home, but it’s not.

‘You won’t necessarily need a walking stick and a Zimmer frame – I’m walking proof of that.’

Versus Arthritis supports young people with the condition and their families through its Young People and Families Service. For more information visit versusarthritis.org

WHAT IS JUVENILE IDOPATIHIC ARTHRITIS AND WHAT ARE THE SIGNS?

Juvenile idiopathic arthritis (JIA) is inflammation (swelling) of one or more of your joints. It first occurs before the age of 16.

Nearly 300,000 young people in the US have some form of arthritis, mostly JIA, according to Arthritis Foundation, and 12,000 under 16s in the UK have JIA.

JIA is slightly more common in girls. It most commonly occurs in pre-school age children or teenagers.

JIA may be difficult to control in some people, but most cases will be well controlled with treatment most of the time. If you have arthritis as part of another condition, it’s often managed in a very similar way to JIA.

joint(s) that are warm to touch

a fever that keeps returning

a limp but no injury.

‘Idiopathic’ means the cause is unknown.

JIA is an autoimmune disease. The immune system is the body’s way of defending itself against injury, illness or bacteria. The body can defend itself by causing inflammation or swelling.

But when you have JIA, your body creates inflammation in a joint or joints when it doesn’t need to. This inflammation then causes stiffness and pain.

JIA is thought to be due to a combination of genetic factors and trigger factors from the environment, for example the infections that your immune system has been in touch with.

In at least 30 per cent of cases, arthritis can remain active into adult life.