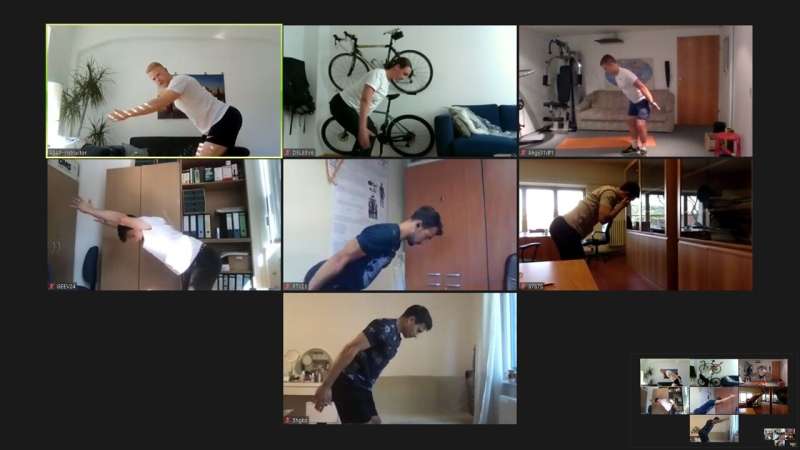 Interactive training programs for use at home can make the restrictions during a lockdown more bearable. The live-streaming of sports offerings allows for a significant increase in physical activity, revealed a research team from ten countries headed by the Institute of Sport Science at Goethe University Frankfurt. At the same time well-being improved compared to an inactive control group. One year previously, the team had described the negative impacts of coronavirus restrictions on exercise and well-being.

People were about 40% less active during the first lockdown in the spring of 2020. This has been revealed by an international study headed by Goethe University Frankfurt. Psychological well-being also declined, with the proportion of people at risk of depression increasing threefold. In order to cushion the effects of this negative development, the research team designed an online training program for use at home and studied whether the physical activity that is so important to general health could be maintained during a lockdown. The results of the study were recently published in the British Journal of Sports Medicine.

Of 763 healthy subjects from nine countries on four continents, half trained for four weeks using a live-stream program, the others formed the control group. Those training could select from a number of daily workouts—for example with the focus on strength, endurance, balance or relaxation. Professional trainers actively accompanied them with a camera and microphone. Each week both groups completed standardized questionnaires on physical activity, anxiety, mental well-being, quality of sleep, pain and sport motivation.

The training program was particularly effective in improving movement behavior in the participants: physical activity was initially as much as 65% higher on average in the online group than in the comparison group, and still 20 to 25% higher after four weeks. Thus, the course participants clearly surpassed the WHO recommendations of at least 150 minutes of moderate or 75 minutes of intensive exercise per week, while the control group only just attained these. At the same time the motivation to do sport, psychological well-being and sleep improved, and anxiety levels decreased. “While these improvements are minor, they are nevertheless potentially relevant,” stresses study head Dr. Jan Wilke from the Institute of Sport Science at Goethe University Frankfurt. “Our participants were all healthy—the effects with patients could be significantly greater, in particular with people who have chronic disease.” In addition, he said, four weeks is a very short period for such efficacy studies. Participants who took part in at least two courses per week stated their fitness was even better and they had a greater feeling of well-being, yet did not note any further improvement with sleep or fears.

Unfortunately, only just under half of the participants completed the study. The research group attributed this in particular to the considerable effort of completing the questionnaires each week. This frequent information retrieval was intended to ensure that the study would allow conclusions to be drawn even if the lockdown regulations were relaxed. The changes in local conditions in the same period could also have lowered the motivation of some participants, for example if local fitness studios had reopened. Moreover, the requirements were very strict: those who did not respond by completing the questionnaire were eliminated from the study.

“Train at home, but not alone”—it is best to train at home with others, this is how the working group summarized its findings on exercise offerings in the pandemic-induced lockdown. Following the main section of the study—the live-streaming—when both groups had access to recorded contents, the differences that had been observed declined in part. According to Wilke, this is due to both the activation of the control group as well as to the change in the form of the physical activity intervention (live vs. recorded).