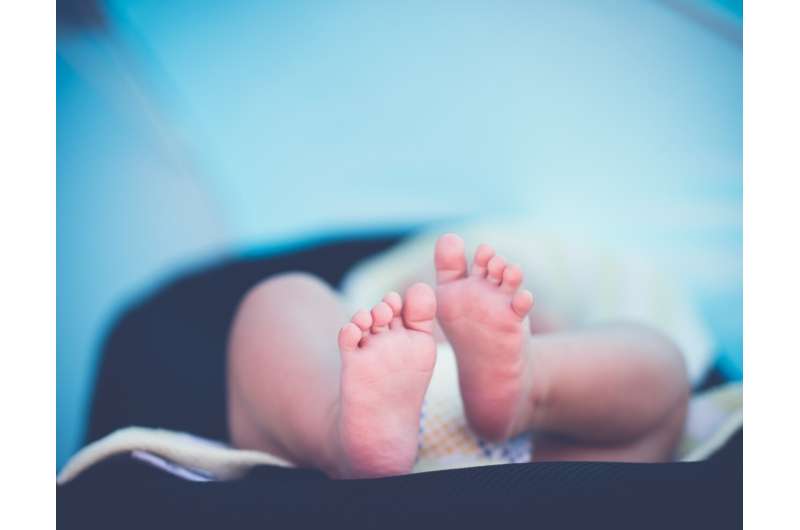 More than 30,000 babies a year are born in the United States with neonatal opioid withdrawal syndrome, yet treatment options are limited to supportive care or medicating with more opiates, such as morphine.

“If you’re a baby born to a mother who takes opiates, which unfortunately is very common, you have a 50% to 75% chance of going into withdrawal,” said Gary Peltz, MD, Ph.D., professor of anesthesiology, perioperative and pain medicine at Stanford Medicine. “It’s an awful way to begin life.”

In their first days to weeks of life, many of these babies experience symptoms that include excessive crying, irritability, tremors, and trouble sleeping and eating; and they often require stays in an intensive care setting.

A new clinical trial in infants led by Peltz may point to a novel, opiate-free way to treat the syndrome. The researchers found that a commonly used anti-nausea drug, if given to the mother during labor and to the newborn for five days after birth, could reduce withdrawal symptoms.

“It’s the first attempt to do something that could prevent this withdrawal syndrome from occurring in at-risk infants,” said Peltz, who is lead author of the study published in August in the Journal of Perinatology. “All of the current efforts involve trying to give the baby a different type of opiate or a different duration of treatment.”

The drug, ondansetron, is not an opiate. It is often prescribed to treat the nausea that is associated with pregnancy or chemotherapy. Scientists don’t fully understand how it reduces withdrawal symptoms, Peltz said, but it acts on serotonin receptors in the brain.

The trial stems from work in mice that Peltz did nearly 15 years ago, in the early years of the opioid epidemic. Using a computational method that he developed to identify the genetic basis for differences in biomedical traits or disease susceptibility in mice, he set out to study differences in opiate responses. The gene for a serotonin receptor called 5-HT3 had the strongest effect on opiate responses. Luckily, ondansetron, which is known to block 5-HT3 receptors, was already approved by the U.S. Food and Drug Administration.

“We genetically mapped differences in opiate response to a gene, and we were very fortunate that the gene was targeted by a commonly used drug,” Peltz said.

When mice experiencing withdrawal were given ondansetron, their symptoms were dramatically reduced. Peltz’s team then tested ondansetron and a similar 5-HT3 blocker on unaddicted human adult volunteers. To induce withdrawal, researchers gave the volunteers morphine followed by naloxone to reverse the opiate effects. When the volunteers were given the 5-HT3 blocker prior to the morphine, they experienced significantly milder withdrawal symptoms such as sweating, restlessness and anxiety.

Trial in mothers and babies

The new trial studied 90 mothers who had used opioids during pregnancy and their babies. In half of the participants, the mothers were given ondansetron four hours prior to delivery, then their newborns received a daily dose of the drug for five days. The severity of the newborns’ withdrawal symptoms was measured using the Finnegan scoring system, which assesses many factors including crying, sleeping, movements, breathing and feeding.

Overall, the researchers found that babies receiving ondansetron had 20% lower symptom scores than babies receiving a placebo. There was also a trend toward shorter hospital stays—with fewer treated babies requiring stays of 16 days or longer—though it did not reach statistical significance.

Though the effect was not as dramatic as those seen in the earlier studies in non-addicted mice and adult volunteers, a 20% reduction in symptoms would be enough in many babies to avoid treatment with opioids, according to the researchers. The milder effect of the treatment may be a result of the infants’ longer exposure to opioids in the womb and the ondansetron treatment period being too short.

“Remember: The baby’s been in utero for nine months. For many of those months, he or she has been exposed to opiates, and has become addicted,” Peltz said. “What we want to do now is to see if we can obtain a larger reduction in opioid withdrawal by treating for a little longer.”

He hopes to test whether beginning ondansetron treatment a week earlier in the mother could have a bigger effect.

“Neonatal opioid withdrawal syndrome is a terrible way to have a baby start life,” Peltz said. “And we don’t even know what the long-term consequences are for treating the baby with narcotics when the brain is developing.”

Ondansetron could also hold promise for preventing opioid addiction from developing in the first place. Because the drug does not affect how opiates treat pain, it may be possible to co-administer ondansetron with opioids to avert addiction, according to Peltz.

“Almost all diseases that we know of, from cancers to infections, are much easier to treat at the earlier stages rather than the later stages,” he said. “That’s also true of drug addiction.”