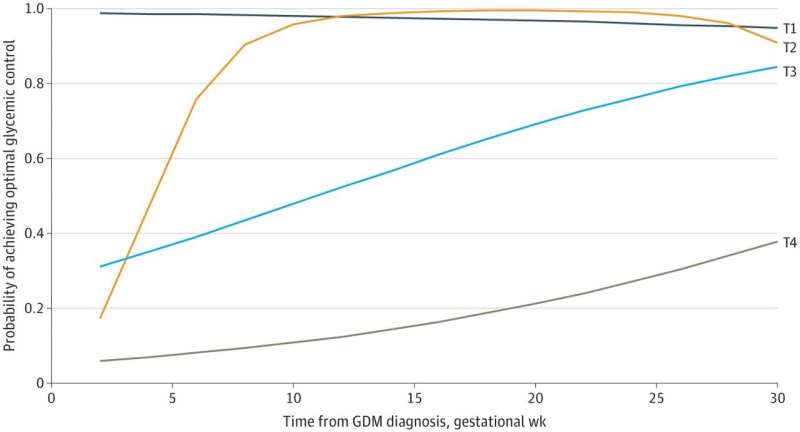 Pregnant patients treated for gestational diabetes had better birth outcomes if they rapidly improved their blood sugar levels soon after diagnosis rather than having slow or no improvement, according to new research from Kaiser Permanente.

The study, published September 29 in JAMA Network Open, found that patients who had slower improvement or did not achieve optimal glucose control had a higher risk of cesarean delivery, large-for-gestational-age baby, dislocation of the baby’s shoulder during delivery, or admission of the baby to the neonatal intensive care unit.

“Glycemic control is a cornerstone of gestational diabetes management, so it’s important to learn in detail about the trajectory of control between diagnosis and delivery,” said senior author Yeyi Zhu, Ph.D., a research scientist with the Kaiser Permanente Division of Research. “This study goes beyond identifying whether a patient has control of their blood sugar and offers insights into the role of timing of glycemic control.”

The study also illuminated the factors that enabled patients to manage their blood sugar levels early: having a healthy weight before pregnancy, avoiding tobacco and alcohol during pregnancy, being engaged in a gestational diabetes care program, and closely self-monitoring blood glucose levels, which patients were asked to do 4 times a day.

“One thing that stood out to us about patients with early glucose control was that they were more likely to be engaged with the RPSC,” said lead author Rana Chehab, Ph.D., a research fellow with the Division of Research. “They were more likely to have phone calls with nurses and to do the glucose measurements at least 3 times a day.”

The authors said it was significant that nearly 90% of the patients who participated in the telehealth support program significantly improved their blood glucose levels before delivering their babies.

“Managing one’s blood sugars in pregnancy can be difficult, and we give patients personalized care from very knowledgeable, caring staff members,” said study co-author Mara Greenberg, MD, a maternal-fetal medicine specialist with The Permanente Medical Group who directs the Regional Perinatal Service Center. “This study shows great outcomes for the majority of our patients and we’re very proud of that.”

Kaiser Permanente patients in Northern California who are pregnant are routinely screened for gestational diabetes toward the end of the second trimester of pregnancy and during the study period, patients at high-risk of developing gestational diabetes were screened earlier in pregnancy, in accordance with national standards. Gestational diabetes can increase the risk of complications for the mother and child, including preeclampsia, early birth, and large-for-gestational-age baby, along with long-term metabolic and cardiovascular problems.

The study included 26,774 individuals enrolled in the gestational diabetes program at Kaiser Permanente in Northern California between January 2007 and December 2017. The researchers analyzed the data on glucose control levels between diagnosis and delivery and found that patients were clustered into 4 different trajectories. About 40% were “stably optimal,” starting out with good control and maintaining it. About 34% were “rapidly improving to optimal,” with a trajectory showing rapid improvement to optimal levels. Glucose control was labeled “optimal” when it met targets recommended by the American Diabetes Association.

The study adds important detail to the experience of managing gestational diabetes, said co-author Assiamira Ferrara, MD, research scientist and associate director of the Division of Research. “Previous studies categorized women as being in control of glucose or not, but we wanted to know if the timing of glucose control attainment mattered in terms of outcomes, and it does,” she said.