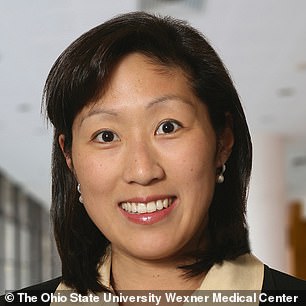 Massick (pictured) said that hair loss often starts along the hairline, temples and top of a person’s head

Dr Susan Massick, a dermatologist at Ohio State University in Columbus, urged men to act as soon as their hairline started to recede by switching to eating more foods like eggs, beef, chickpeas, pumpkin seeds and black beans. She said the extra protein would help hair follicles grow, while the added iron would boost the amount of oxygen red blood cells could carry to cells.

The dermatologist also threw her weight behind the readily available 57 cent a day medicine Minoxidil — commonly known by its brand name Rogaine — which can be given as a low dose pill to help slow or even reverse hair loss.

Other experts have previously warned against using shampoos that contain sulfates — which are used in nearly all shampoos and trigger the white foam — and formaldehyde — a cleaning agent that kills bacteria. They say these can damage hair and irritate the scalp boosting hair loss, although studies are yet to confirm this.

More than half of American men have suffered some form of hair loss by age 40 , estimates suggest, with many spending significant amounts on treatments despite little proof they work. 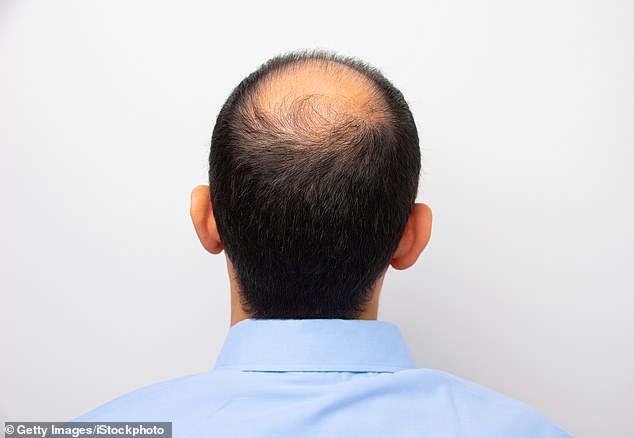 Dr Susan Massick, a dermatologist at Ohio State University, said that a balanced diet rich in protein and iron could help to slow hair loss in men (file photo)

Head and Shoulders Classic Clean and Dove Men + Care are just two shampoos that contain sulfates – which give the shampoos their classic white foam. The sulfates – shown on the label as sodium lauryl sulfate – are in many other brands, however

Massick revealed her tips for fighting hair loss and pattern baldness — a receding hairline and thinning hair on the top of the head — to Insider.

Pattern baldness is triggered by the hormone dihydrotestosterone, or DHT, which shrinks hair follicles leading to it growing thinner and falling out more easily.

It can be slowed down if it is caught in the early stages — ensuring someone can keep as much hair as possible.

Massick said that hair loss primarily begins on the hairline, temples and top of the head, before spreading to other areas.

But she said it could be slowed by eating a balanced diet rich in protein and iron, that will keep the hair ‘healthy’ and ‘strong’.

She did not say how much someone should consume to avoid hair loss, but estimates from the Food and Drug Administration (FDA) suggest men should consume about 50 grams of protein and up to 20.5 milligrams of iron a day.

These estimates are based on men that do little exercise, however, suggesting others may need considerably more. A blood test would reveal whether someone has a deficiency.

It is thought a balanced diet could also help women suffering from hair loss. About 18 percent have this.

Several papers have already suggested that a poor diet could be behind triggering and speeding up hair loss.

Online the American Academy of Dermatology also says people should ‘eat healthy’ and ensure they are getting enough iron and protein to avoid hair loss.

It adds that those who got blood tests showing they have deficiencies in iron should take supplements.

Other experts have also previously suggested that a poor diet may be the explanation for more rapid hair loss.

Dr Debra Jaliman, a dermatologist at the Icahn School of Medicine at Mount Sinai, New York City, says that when the body doesn’t get enough protein then what is available gets funneled to essential organs. This means less is available for hair.

Massick said men suffering from hair loss should also avoid styling their hair, because this pulls on the weakening follicles.

She warned people not to use shampoos claiming to promote hair growth because they ‘don’t stay in your hair long enough’ to penetrate follicles.

There have also been suggestions from the Food and Drug Administration (FDA) that sulfates and formaldehyde — often found in shampoos — could trigger hair loss as they irritate the skin.

The chemicals, which are also used in cleaning detergents, have had concerns raised over them in the past. But no scientific study has yet conclusively shown that they can trigger hair loss.

Products that contain this include Head and Shoulders Classic Clean, available in most stores for $5.99 per bottle, and Dove’s Men+Care Sport shampoo, sold for $5.59 per bottle.

But many shampoos contain sulfates — shown on the label as sodium lauryl sulfate — including those from other well-known brands.

Last month it was revealed that the cheap and readily available drug minoxidil that has been available in pharmacies for decades could be used to treat hair loss.

Previously it was sold over the counter to patients as a lotion to be rubbed into the scalp to help restore lost hairs.

But now more and more doctors are telling patients to get it as a low dose pill, which many have found is much more effective. The treatment — which sells for 57 cents a pill — is yet to be approved by the FDA to prevent hair loss.

Men lose hair due to a range of factors, including a family history of balding, stress and chemicals in their environment.