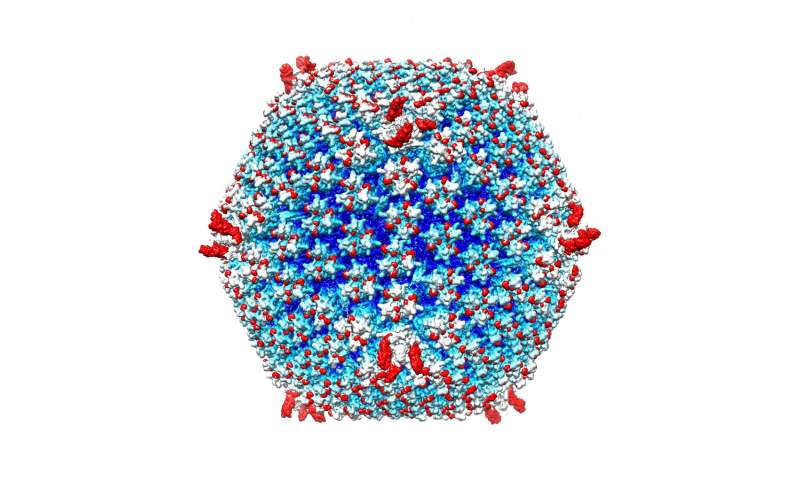 Many cancer researchers can claim to have devised “smart bombs.” What has been missing is the stealth bomber—a delivery system that can slip through the body’s radar defenses.

Oncolytic viruses, or viruses that preferentially kill cancer cells, have been discussed and tested for decades. An oncolytic virus against melanoma was approved by the FDA in 2015. But against metastatic cancers, they’ve always faced an overwhelming barrier: the human immune system, which quickly captures viruses injected into the blood and sends them to the liver, the body’s garbage disposal.

Researchers at Emory and Case Western Reserve have now circumvented that barrier. They’ve re-engineered human adenovirus, so that the virus is not easily caught by parts of the innate immune system. This makes it possible to inject the virus into the blood, without arousing a massive inflammatory reaction.

A cryo-electron microscopy structure of the re-engineered virus and the virus’s ability to eliminate disseminated tumors in mice are reported in Science Translational Medicine.

“The innate immune system is quite efficient at sending viruses to the liver when they are delivered intravenously,” says lead author Dmitry Shayakhmetov, Ph.D. “For this reason, most oncolytic viruses are delivered directly into the tumor, without affecting metastases. In contrast, we think it will be possible to deliver our modified virus systemically at doses high enough to suppress tumor growth—without triggering life-threatening systemic toxicities.”

The co-first authors of the Science Translational Medicine paper are Emory associate scientist Svetlana Atasheva, Ph.D. and Case Western Reserve graduate student Corey Emerson. Shayakhmetov is professor of medicine and pediatrics at Emory University School of Medicine and a member of Lowance Center for Human Immunology and Emory Vaccine Center.

Shayakhmetov has been working for 15 years with structural biologist Phoebe Stewart, Ph.D., professor in the Department of Pharmacology and a member of Cleveland Center for Membrane and Structural Biology at Case Western Reserve University. Their focus: re-engineering adenovirus, a delivery system that has been used in dozens of cancer clinical trials to stimulate host anti-tumor response.

Adenoviruses have also been central to gene therapy studies. Shayakhmetov recalls the 1999 death of Jesse Gelsinger, a volunteer in a gene therapy clinical trial who died of cytokine storm and multi-organ failure connected with high doses of an adenovirus vector delivered into the bloodstream. He says that event inspired him to retool adenovirus, so that it would not set off a strong inflammatory reaction. He views the re-engineered adenovirus as a platform technology, which can be adapted and customized for many types of cancer, and even to individual cancer patients as a form of personalized cancer therapy.

“This is a new avenue for treatment of metastatic cancers,” Shayakhmetov says. “You can arm it with genes and proteins that stimulate immunity to cancer, and you can assemble the capsid, a shell of the virus, like you’re putting in Lego blocks.” 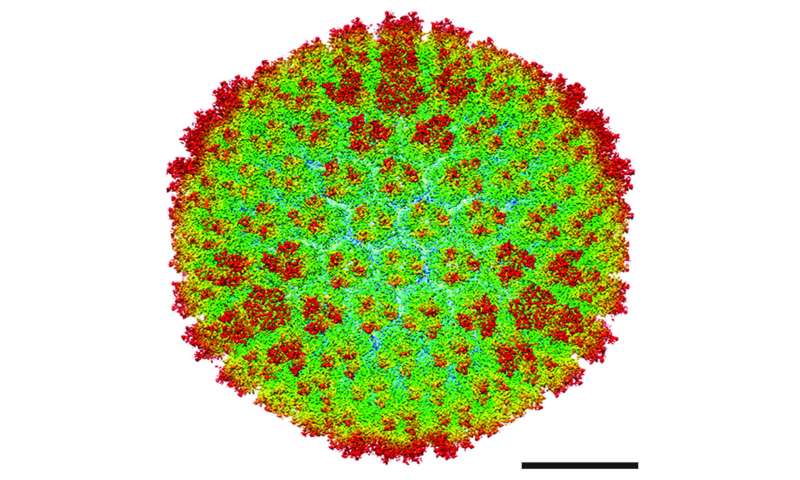 Shayakhmetov started working on the modified virus technology while he was at the University of Washington and founded a company, AdCure Bio, to bring a potentially life-saving therapy to patients with metastatic disease.

In 2012, Shayakhmetov’s and Stewart’s labs published a cryo-EM analysis of how adenovirus interacts with one host factor in the blood, coagulation factor X, in Science.

“Sometimes even small changes in structural proteins can be catastrophic and prevent assembly of the infectious virus,” Stewart says. “In this case, we modified adenovirus in three places to minimize virus interactions with specific blood factors. We found that the virus still assembles and remains functional for infecting and killing tumor cells.”

It is still possible for a slower-building adaptive immune response to develop to the modified virus, similar to that observed with a vaccine. A panel of viruses could be used for sequential administration to cancer patients to extend therapeutic benefits, Shayakhmetov says. 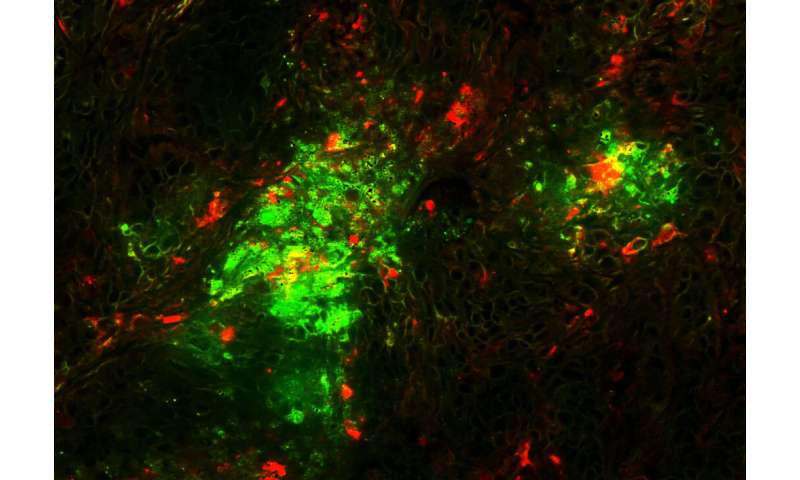 “Our study is the first to show that we can modify the binding of natural IgM to adenovirus. We introduced mutations that prevent virus inactivation in the bloodstream and its trapping in liver macrophages, the largest pool of immune cells in our body that trap and destroy pathogens,” he says. “Up to now, the prevailing view has been that any regular repeating structure, like the shell of the virus, would attract low-affinity natural IgM antibody binding, leading to its prompt inactivation and removal from the blood.”

The researchers also replaced part of the adenovirus that interacts with human cellular integrins, substituting a sequence from another human protein, laminin-α1 that targets the virus to tumor cells. Emerson and Stewart obtained a high resolution cryo-electron microscopy structure of the re-engineered virus (see figures).

When injected into mice, high doses of standard adenovirus triggered liver damage and death within a few days, but the modified virus did not. The modified virus could eliminate disseminated tumors from some, but not all mice engrafted with human lung cancer cells; a complete response—lack of detectable tumors and prolongation of survival—was observed in about thirty five percent of animals. Tumor sites in the lung were converted into scar tissue, the scientists found. Now, Shayakhmetov’s lab is exploring approaches to further increase the proportion of complete responders.