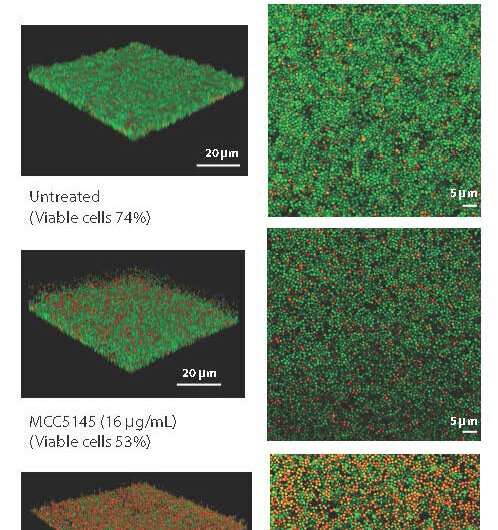 An experimental antibiotic is under development that is capable of neutralizing a wide range of drug-resistant, Gram-positive bacteria—pathogens that protect themselves in a slimy shield, called a biofilm, designed by nature to keep threats out.

Bacterial infections are extraordinarily difficult to treat when pathogens are protected by a biofilm. The film forms as a consequence of bacterial colonies growing together in a tough and protective matrix. Infections caused by bacteria protected by biofilms are often chronic and extend across a complex range: Dental infections that lead to tooth loss can be worsened by biofilms. Deadly drug-resistant lung infections, bacterial infiltration of the sac surrounding the heart, wound infections, and even infections of the blood can all be complicated by the presence of biofilms.

Antibiotic treatment of biofilm-shielded bacteria are challenging, doctors say, because many conventional antibiotics can’t penetrate the slime to kill the active bacteria.

In Australia, Dr. Mark Blaskovich of the Center for Superbug Solutions at the University of Queensland’s Institute for Molecular Bioscience, has been working with an international team to address resistant infections that involve biofilms. Blaskovich and colleagues call their experimental medication MCC5194, and describe it as a modified version of vancomycin, the potent antibiotic backed by decades of use.

The difference between MCC194 and unmodified vancomycin is that the experimental drug acts as a torpedo when encountering biofilms. In preclinical tests, MCC5194 killed major Gram-positive bacterial threats such as methicillin-resistant Staphylococcus aureus—MRSA—and destroyed the bacterial biofilm. The drug was also effective in tests against other Gram-positive bacteria, and eradicated their biofilms, too.

For patients worldwide, the annual morbidity and mortality from biofilm-forming infectious bacteria are formidable. In addition to MRSA, Streptococcus pneumoniae is another biofilm-forming bacterium that is difficult to treat. But as the global health crisis of antimicrobial resistance has inexorably increased, solutions have been few and far between. Worse, the current research pipeline isn’t producing enough new antibiotics to overcome the problem, which Blaskovich and colleagues attribute, at least in part, to economic factors. Antibiotic development at pharmaceutical companies is not a high priority.

In 2019, 250,000 deaths were attributed to these pathogens globally, Blaskovich added, noting that “drug-resistant Gram-positive bacterial infections remain a critical concern, and new treatment modalities against them are needed in the clinic.”

The research, which included teams in the United States, Switzerland and the United Kingdom, exposed hundreds of clinical isolates of MRSA and other Gram-positive bacteria to MCC194. In addition to tests of infected human cells, the team also tested the drug in a murine animal model. One set of experiments involved a thigh infection in the mice. Another arm of the tests judged MCC194’s effectiveness against septicemia caused by Streptococcus pneumoniae.

The team said their findings suggest MCC194 might one day be part of medicine’s armamentarium aimed at bacterial infections that have become increasingly resistant to standard antibiotic therapy. The hope is that MCC194 becomes a medication exclusively for drug resistant Gram-positive bacteria, particularly those encumbered by biofilms.

In contrast, Gram-negative bacteria don’t readily absorb crystal violet staining. They have a relatively thin peptidoglycan layer that is sandwiched between an inner and outer cell membrane. Gram-negative bacteria include some of the most notorious drug resistant species: Pseudomonas aeruginosa, Klebsiella, Acinetobacter, and E. coli.

These pathogens often appear pinkish when viewed through a light microscope following crystal violet staining. Gram-negative species, like their Gram-positive counterparts, are readily capable of forming biofilms. P. aeruginosa, a menace when it comes to deadly lung infections, is characterized by a tenacious biofilm.

Even though efforts to combat biofilm-forming bacteria are not as robust as they should be, most research that is underway focuses largely on Gram-negative species and the complex nature of its cell membranes, Blaskovich and colleagues say.