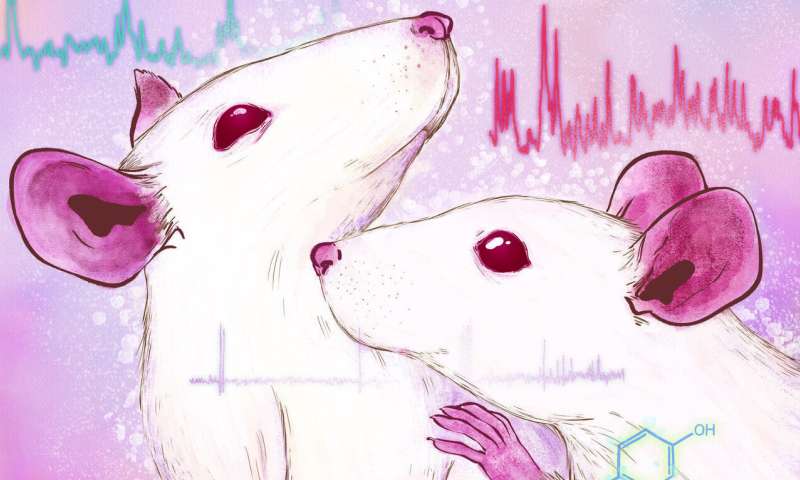 The sense of touch can significantly affect how animals and humans perceive the world around them, enriching their experiences and allowing them to gather more information about their surroundings and other living organisms. Although touch is a crucial aspect of perceptual experience, in philosophical, psychological and neuroscientific research it has often been overshadowed by vision.

Researchers at the Central Institute of Mental Health, University of Heidelberg, CNRS, University of Strasbourg, and other institutes in Europe, Israel and the US have recently carried out a fascinating study investigating how social touch can affect communication between female animals. Their paper, published in Nature Neuroscience, shows that in female rats, social touch promotes communication through the activation of parvocellular oxytocin neurons.

“From the softest caress to the harshest blow, touch lies at the heart of our sensory experience of the world and shapes the way we perceive it, especially during intimate interactions with other humans,” Valery Grinevich, one of the researchers who carried out the study, told Medical Xpress. “During evolution, vertebrates developed a plethora of sophisticated sensory systems, which represented a clear evolutionary advantage and entailed that higher mammals were able to discriminate between pain, moderate and gentle forms of touch.”

Social touch is crucial for intimacy and can also contribute to the formation of trust-based relationships between most mammals. Different types of touch, ranging from gentle touch, to grooming and caressing behaviors can be commonly observed among several classes of mammals, including rodents, felines, canines and primates.

The chemicals in the brain produced by social touch can play a part in establishing and maintaining social hierarchies within groups of animals. In their study, Grinevich and his colleagues specifically focused on a chemical that is particularly crucial for establishing these relationships: the neuropeptide oxytocin.

“Oxytocin not only facilitates birth and lactation, but actively fine-tunes the brain to modulate emotions, sexual intercourse, pair bonding and parental behavior,” Alexandre Charlet, another researcher involved in the study, told Medical Xpress. “However, how, exactly, oxytocin promotes these prosocial behaviors and what triggers the actual release of the neuropeptide remained a mystery. This is the key question addressed in our paper.”

Grinevich, Charlet and their colleagues used a variety of modern neuroscience techniques to monitor and manipulate the activity of oxytocin neurons in freely moving female rats. Remarkably, they were the first research group to ever collect electrophysiological recordings of individual oxytocin cells and their populations.

The researchers also periodically activated and inhibited a specific subset of oxytocin neurons, known as parvocellular neurons, using pharmacogenetic techniques. This allowed them to specifically examine the unique contributions of this small population of oxytocin neurons to inter-female communication.

“We also used viral vector-based tracer methods to visualize oxytocin neurons and establish their connectivity,” Grinevich explained. “Finally, we monitored social communication between females and males in which the activity of oxytocin neurons was enhanced or silenced.”

The results gathered by Grinevich, Charlet and their colleagues suggest that parvocellular oxytocin neurons play a key role in touch-based communication between female rats. More specifically, these neurons are responsible for translating sensory signals picked up by an animal’s body into various types of social interactions.

“Our results provide fundamentally new insights into how the neuropeptide orchestrates social behavior,” Charlet said. “Furthermore, they support a vision of oxytocin as a powerful agent to treat mental disorders: A combination of sensory body stimulation (for example, via huddling or massage) and intranasal oxytocin administration might synergistically mitigate socio-emotional alterations in humans afflicted with mental diseases, such as autism spectrum disorder and posttraumatic stress disorder.”

While the researchers specifically conducted their study on virgin female rats, the findings they collected could also be applicable to other mammals, including humans. In the future, their work could thus pave the way toward the development of new forms of therapy for mental health disorders that integrate soothing forms of social touch.