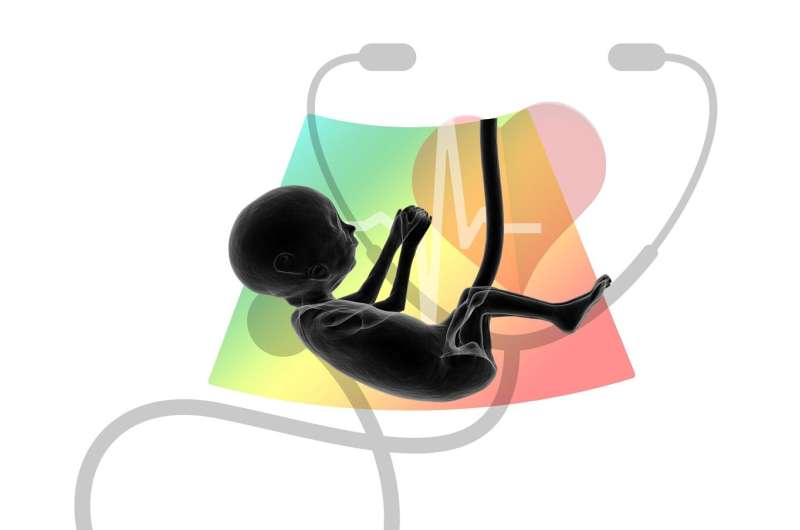 Children with congenital heart disease (CHD) often have neurodevelopmental impairment. Until fairly recently, this was thought to stem from complications of cardiac surgery or reduced oxygen supply to the brain due to the heart defect.

Now we know that some babies with CHD have impaired brain development in utero because of low oxygen supply to the fetal brain or as part of the genetic disease process that caused CHD itself.

The ability to identify CHD before birth allowed a team at Boston Children’s Hospital to ask whether fetal brain imaging might predict children’s neurodevelopmental risk. If so, it would justify early interventions, perhaps even before babies are born.

“A lot of brain development occurs during the fetal period that can influence a baby’s future trajectory,” says study leader Caitlin Rollins, MD, in the Department of Neurology and Cardiac Neurodevelopmental Program at Boston Children’s. “Many babies with CHD receive early intervention, but the level of services can vary depending on local resources and level of concern. Prenatal MRI could help identify babies for whom we need to pull out all the stops.”

Rollins and collaborators in Boston Children’s departments of Cardiology, Radiology, and Psychiatry began enrolling pregnant mothers in 2014. Their first finding, reported last year in the Annals of Neurology, was that fetuses with CHD, particularly those with hypoplastic left heart syndrome (HLHS) or transposition of the great arteries (TGA), have smaller brain volumes than those without CHD.

A newer study, published in Circulation, correlates these smaller brain volumes with neurodevelopmental outcomes. The team compared 56 expectant mothers whose fetus had known severe CHD with 26 controls who had a family history of CHD but whose fetuses were healthy. Children with known genetic conditions or anomalies affecting organs other than the heart were excluded.

All the women had at least one interpretable fetal MRI brain scan. When their babies were 18 to 24 months old, the team carefully assessed their development and everyday functioning with the Bayley Scales of Infant and Toddler Development (Bayley-III) and the Adaptive Behavior Assessment System (ABAS-3).

Smaller brain volumes on fetal MRI predicted the outcomes of babies with CHD, but not controls, across all domains of neurodevelopment. When the team looked at other variables, like birth weight, caregiver education, complications such as seizure or stroke, and neonatal surgery, total fetal brain volume was the most consistent predictor of neurodevelopment. It was also the only variable that reliably predicted adaptive functioning—skills necessary to navigate day-to-day challenges.

“To the best of my knowledge, this is the first paper to associate fetal brain development with later neurodevelopmental outcome in patients with CHD,” says coauthor Jane Newburger, MD, MPH, associate cardiologist-in-chief and founder of the Cardiac Neurodevelopmental Program. “It suggests that fetal brain size could be used as a trigger for early postnatal intervention and as an outcome measure for efficacy of fetal therapies.”

For example, studies indicate that stress in expectant mothers can influence their babies’ brain development. The Cardiac Neurodevelopmental Program offers a Prenatal Stress Reduction Program, using mindfulness and cognitive-behavioral approaches, to all pregnant mothers whose fetuses have CHD. Rollins hopes to set up a clinical trial of this approach in the near future, using fetal brain imaging to help measure its effects.

Other potential neuroprotective approaches include maternal oxygen therapy and pharmacologic agents. “These are still controversial, and we haven’t tried them yet,” says Rollins. “In the future, I expect we will embark on trials of different agents, especially in high-risk fetuses with HLHS or TGA, and use prenatal MRI to as a ‘biomarker’ to help measure outcomes.”

Rollins and her colleagues at Boston Children’s and across the country are now setting up an infrastructure to do multicenter studies.

“We want to look the value of fetal brain MRI in different types of heart disease, which will require large samples,” Rollins says.

In the meantime, the original cohort of children is now reaching school age (6 to 8 years). The Boston Children’s team is starting to evaluate them to see the long-term effects of small fetal brain volumes, if any. Adaptive functioning is of particular interest, since it can affect self-care, communication, and social skills later in life.