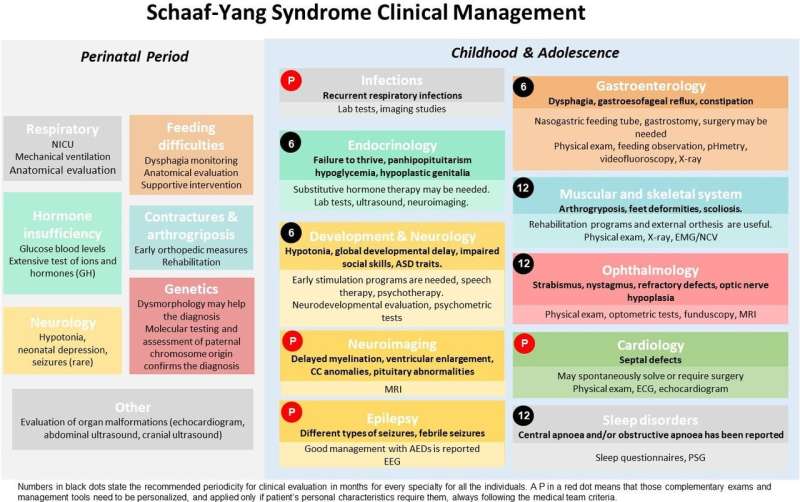 Improving knowledge of Schaaf-Yang syndrome (SYS), an ultra-rare disease caused by mutations in the MAGEL2 gene, is the aim of the first clinical guideline aimed at health care professionals and families of children affected by it. The article, published in the Journal of Medical Genetics, has revealed the effects of the truncated MAGEL2 protein on cell physiology.

Schaaf-Yang syndrome (SYS) is an ultra-rare disease caused by mutations in the MAGEL2 gene, located on chromosome 15. The MAGEL2 gene is mainly expressed in the brain and its protein is key in the transport complex and the recycling regulation of certain proteins within cells. Patients with SYS show a wide variety of clinical signs and symptoms, the most common of which are neurodevelopmental and intellectual delay, sleep disturbance, facial dysmorphism and joint contractures.

The loneliness of having an ultra-rare disease is one of the great difficulties faced by affected families. Currently, only 11 cases of Schaaf-Yang syndrome are known in Spain, and fewer than 200 worldwide. This low incidence makes standardized medical care difficult, as there are neither clear clinical guidelines nor specific or follow-up treatments.

“Often, families and professionals face a great uncertainty due to a lack of information. For this reason, it is vital to have evidence-based recommendations that help improve clinical care and empower families about the natural course of the disease,” notes Merche Serrano, neuropediatrician at the Sant Joan de Déu Barcelona Hospital, researcher at the IRSJD and coordinator of the clinical part of the study.

An evidence-based guide for professionals and families

The research team reviewed all the articles and studies on SYS that had been published, with the aim of producing a comprehensive clinical guideline for healthcare professionals and families, so that both groups would have more knowledge about the disease when taking care of the patients.

The clinical guideline includes the most relevant medical problems divided into two time periods: the first includes the first 28 days of life, and the second includes childhood and adolescence. The most appropriate interventions for each problem have also been indicated, as well as the best possible follow-up guidelines. This guide aims to ensure the best possible care for all children.

“We have also made a guideline and material aimed at families, at the request of the Schaaf-Yang Syndrome Families Association, which will help them learn about the evolution of the disease and will empower them,” says Roser Urreizti. “For us, it is very important to work closely with families and patients, especially in minority diseases where patients play a key role in advancing in the research,” concludes the researcher.

The toxic effect of the truncated protein MAGEL2

The extensive review of the scientific literature has also mapped all the mutations in the MAGEL2 gene, most of which result in a truncated (non-functional) protein or a protein with a partial or complete lack of the MHD domain, leading to a malfunctioning of the protein.

The MAGEL2 gene is located on chromosome 15 and it produces the MAGEL2 protein, which is part of the endosomal protein recycling and retrograde transport complex, as well as other functions.

“Our studies show that the mutated MAGEL2 protein is retained in the nucleus of cells, where it may alter the expression and regulation of other genes, while exerting a toxic effect on the cell. We observed low levels of beta-amyloid (Aß) 1-40 and intracellular glutamine in fibroblasts from the patients. These two molecules could serve as possible biomarkers to evaluate future treatments,” says Laura Castilla, first author of the study (UB-IBUB-IRSJD-CIBERER).

The results confirm that the phenotype of Schaaf-Yang syndrome could cause this toxic effect of the truncated MAGEL2 protein, rather than the lack of normal functionality as observed in fibroblasts from the patients the researchers studied.