Skip to content
HomeHealth NewsHow does your country rank in the world cancer league table?

UK has the 13th highest rate of cancer in the world – world cancer league table reveals Australia is the worst hit by the disease (so, how does your country rank?)

The UK has the 13th highest proportion of cancer patients in the world, a global report has revealed.

Data from the World Health Organization shows 9.6 million people worldwide will die of cancer this year, with Western countries racking up the most diagnoses.

More people in Australia and New Zealand get cancer than in any other country, with the United States ranked fifth and the UK 13th.

Rates are lower in African and Asian countries but patients are more likely to die there because of poorer healthcare.

Globally, one in five men and one in six women will develop cancer at some point during their lifestyle, and it is expected to become the leading cause of death.

People have a better chance of survival in developed countries but there are more cases of the disease because of inactive and unhealthy modern lifestyles.

Experts say the new figures reveal an ‘alarming’ rise in the impact of cancer around the globe and show more needs to be done to tackle it. 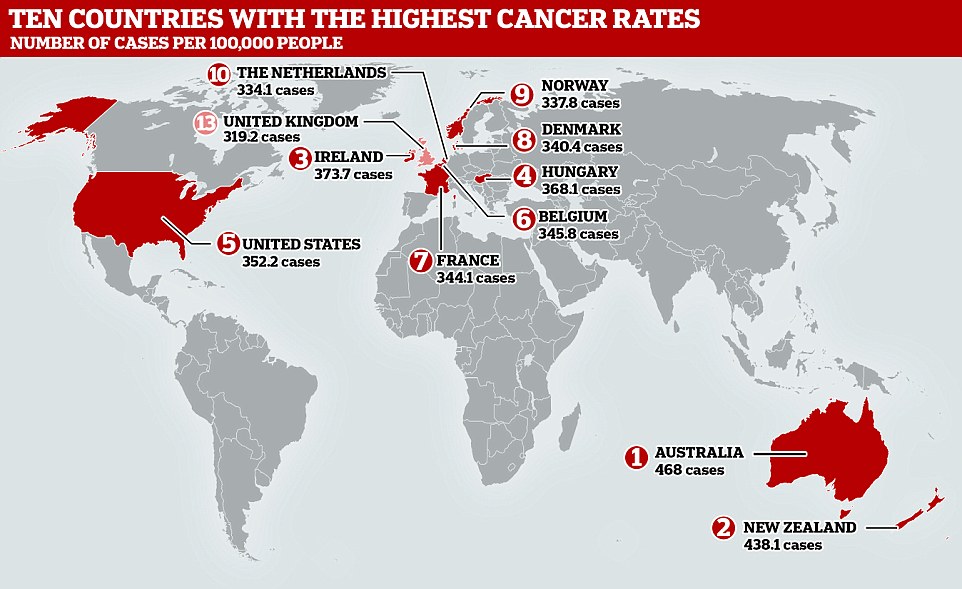 Australia has the highest proportion of cancer cases out of any country in the world, according to a new ranking of 185 countries released by the International Agency for Research on Cancer, a body of the World Health Organization

The International Agency for Research on Cancer, part of the World Health Organization, this week ranked 185 countries by how many cases of cancer they have.

And the figures come as the global health watchdog predicts there will be 18 million new diagnoses of cancer in 2018 and 9.6 million people will die of it.

The cancer threat has risen by 28 per cent since the 14 million cases and eight million deaths predicted in 2012, when the IARC data was last updated.

All the 10 countries with the highest levels of the disease are in Australasia, Europe or North America, while the 10 lowest are in Africa and Asia.

Some 468 people per 100,000 are expected to get cancer in Australia this year – approximately 112,000 people – which is the most of any country worldwide.

The IARC calculates its figures by creating estimates based on countries’ most recent cancer data collected by hospitals.

In the UK, prostate, breast and lung cancer are the most common, with lung cancer being the biggest killer.

Experts say that despite improving treatments and early diagnosis, cancer is still on the rise because people are living longer and making unhealthy life choices.

Eating unhealthy diets with processed foods, not exercising, drinking alcohol and smoking tobacco are all major – but avoidable – causes of cancer.

10 COUNTRIES WITH THE HIGHEST CANCER RATES IN THE WORLD

10 COUNTRIES WITH THE LOWEST CANCER RATES IN THE WORLD

‘These new figures highlight that much remains to be done to address the alarming rise in the cancer burden globally and that prevention has a key role to play,’ said IARC director Christopher Wild.

Experts said the increase could be partly because of growing populations and ageing, but people could do more to reduce their chance of getting sick.

Dr Etienne Krug, director of WHO’s department of non-communicable diseases said: ‘A lot of those [cancer cases] could be prevented, with key prevention efforts focusing on some of the main risk factors which we have heard about: tobacco consumption, alcohol consumption, lack of physical activity and improper diet.

And Dr Krug added treatment should be advanced enough to help people survive, saying: ‘For those who have cancer, cancer should not be a death sentence anymore.’

The research agency’s report said nearly 44 million people in the world are alive five years after being diagnosed with cancer.

And it calculated more than half of all cancer deaths will occur in Asia, home to 60 per cent of the world’s population.

Africa has approximately 7 percent of the world’s cancer cases, but the continent’s death rate tends to be higher, mainly because cancers aren’t caught early or aren’t easily treatable given the limited health resources there.

In developed countries, prevention efforts are helping drive down the rates of various cancers, including those of the lung and cervix, while developing countries are increasingly affected by cancers typically linked to social and economic development, like colon cancer.

But since lung cancer often develops over decades, any decrease in the disease’s frequency from declining smoking rates likely won’t be seen for years.

Dr. Freddie Bray, head of cancer surveillance at IARC, predicted there would be 29 million cases of cancer by 2040 and 16 million deaths.