The machine takes detailed pictures inside the body which are used for everything from diagnosing the cause of headaches and joint pain to monitoring cancer.

But children are often ill-prepared for the experience, and frequently get a shock when they see the huge machine looming over them.

MRI scanners comprise a bed for the patient which slides into a tube containing the scanning technology.

It also makes loud banging noises so patients have to wear ear protectors – but scanning can take up to 90 minutes, which can overwhelm youngsters. 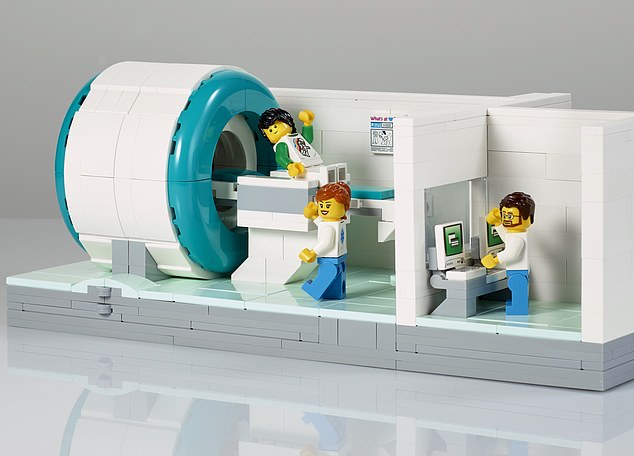 In an effort to ease children’s fears, toy giant Lego has developed a miniature model of an MRI scanner. Last month, 600 of them were donated to children’s hospitals around the world

In an effort to ease their fears, toy giant Lego has developed a miniature model of an MRI scanner. Last month, 600 of them – which come with figures of doctors and a patient – were donated to children’s hospitals around the world.

The model helps children familiarise themselves with the scanner, with doctors able to explain how it works.

Tracey Martin, a child health specialist at Leeds Children’s Hospital, says: ‘It’s difficult to explain to children what’s going to happen in an MRI appointment. But they can play with the Lego scanner and pretend they are the patient. Then, when it comes to the real thing, it’s less scary.’

She adds: ‘Play can be crucial in helping children understand complex ideas. It’s also useful to see how they interact with the toy after the procedure. If they seem angry, or try to break it, it might indicate they found the experience traumatic.’

Keegan, the terrier who keeps the peace on wards

Dogs have long been used in healthcare – they have the ability to sniff out diseases such as Parkinson’s and spot diabetic attacks before they happen.

If a patient is known to be particularly anxious, Keegan will meet them in the car park and stay beside them during appointments with doctors. 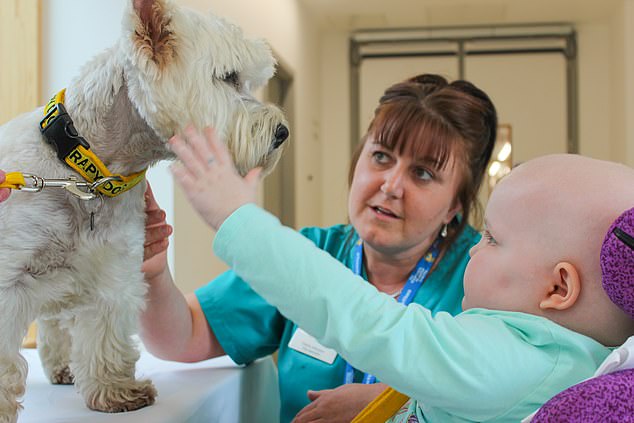 Children can pet Keegan and get him to perform tricks – or take him with them when they undergo anxiety-inducing procedures such as blood tests.

Nurses recently took photographs of the dog inside an MRI scanner to help a young patient feel less intimated by the machine.

One parent said: ‘Without Keegan, my daughter’s anxiety was so severe that we wouldn’t have been able to get through the hospital doors.

‘She was prescribed medication to help calm her down on the day, but she didn’t need it in the end because of Keegan. The dog gave her something to look forward to and comfort before being admitted.’

For some children, a blood test – or the mere sight of a needle – can trigger a total meltdown.

Quite aside from the distress it causes them and their parents, it can make the procedure itself tricky or even impossible to carry out.

So doctors at the Evelina London Children’s Hospital have come up with a high-tech solution: virtual reality games.

Recent trials showed that the headsets, pictured left, which immerse wearers in a realistic 3D universe, soothed children who were anxious about having a blood test and distracted them from what was going on around them. 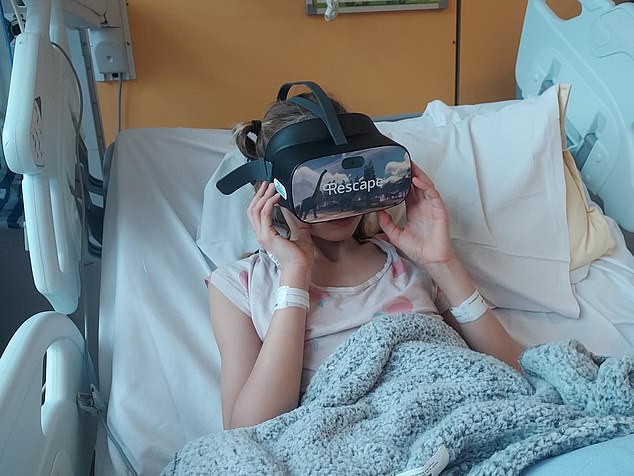 For some children, a blood test – or the mere sight of a needle – can trigger a total meltdown. So doctors at the Evelina London Children’s Hospital have come up with a high-tech solution: virtual reality games

After being given the device, youngsters who had been near-hysterical were suddenly happy to have a needle in their arm.

Researchers also used it on young patients having plaster casts removed, and found they were less likely to wriggle and cry than others.

Doctors say the tech may even reduce the need for general anaesthetic during minor procedures, such as removal of ingrown toenails.

‘We should be able do things like this using a local anaesthetic but some children become so distressed and wriggle around,’ says Michail Kokkinakis, consultant children’s orthopaedic surgeon at Evelina.

Children are handed the headset prior to their procedure and select the fantasy world they want to explore – options include swimming with turtles and a dinosaur safari.

Mr Kokkinakis says: ‘They have it on while they’re having a procedure and they don’t notice what’s going on.’

Getting to the operating theatre in the fast lane

Forget being wheeled over to surgery on a hospital bed – children can now arrive for their procedures in style.

In March, Great Ormond Street Hospital in London introduced a ride-on toy sports car for heart, lung, kidney and brain cancer patients to drive themselves to the operating theatre.

Doctors say weaving through the corridors helps distracts children from any anxieties about their procedure.

Great Ormond Street is not the first hospital to trial the idea. 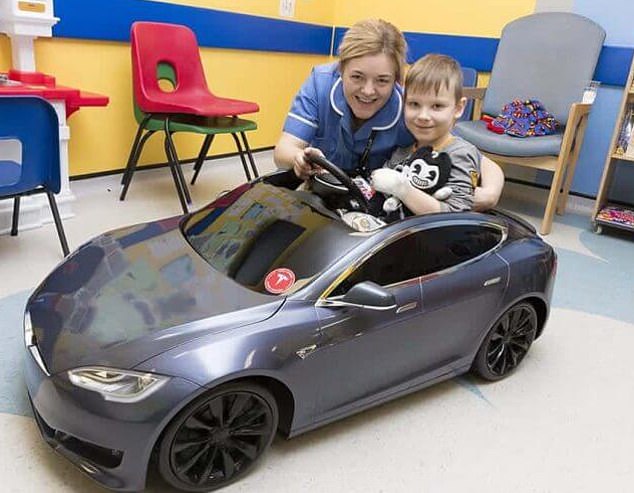 In 2018, a British car club donated 160 toy Teslas to NHS children’s hospitals across the country. When Tesla co-founder Elon Musk got wind of it, he donated £600 to every hospital with a car so they could buy another.

In 2018, a British car club donated 160 toy Teslas to NHS children’s hospitals across the country. When Tesla co-founder Elon Musk got wind of it, he donated £600 to every hospital with a car so they could buy another.

One patient who had the chance to drive one is six-year-old Sophia Fagan from Market Harborough in Leicestershire.

The drive to the theatre – where she had eight teeth removed – was ‘exciting and fun’ she says, adding: ‘I was scared about the operation, and this made it much better.’

Child health specialist Tracey Martin says: ‘Being wheeled along by doctors can be very daunting.’

Games with rewards for being brave

Potent drugs can come with gruelling side effects, and it’s often a challenge to keep children coming back for more treatment.

But doctors at Liverpool’s Alder Hey Children’s Hospital have found a way to keep patients motivated by developing a game, played on a tablet, that offers digital ‘rewards’ at each stage of treatment.

Children pick a cartoon character to represent them while they complete a variety of challenges, including playing songs on a keyboard and colourful jigsaw puzzles.

Over time they earn virtual stickers which unlock new outfits for their character, as well as new games. 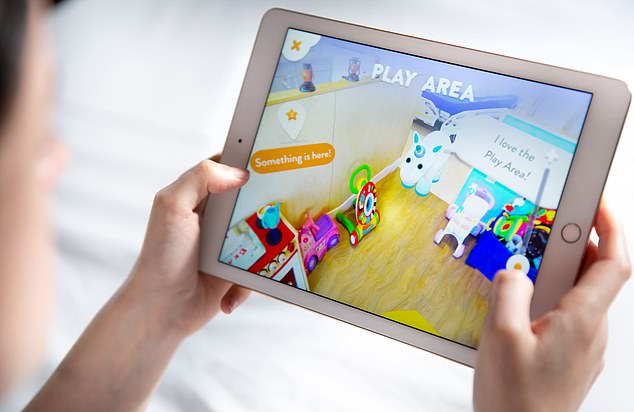 Doctors at Liverpool’s Alder Hey Children’s Hospital have found a way to keep patients motivated by developing a game, played on a tablet, that offers digital ‘rewards’ at each stage of treatment

It means children want to come back to hospital, in the hope of winning more rewards. Studies have shown that rewarding children for having unpleasant treatment can combat fear of the hospital.

Alder Hey’s Claire Liddy says the technology has been of particular benefit for those who need regular drug infusions.

‘Children who use the app are more likely to continue with treatment without kicking up much fuss,’ says Liddy. ‘It makes the experience more positive.’

About 1,600 British children a year are diagnosed with cancer and at least a quarter of them have tumours in the head and neck, including brain cancer.

They may have to undergo one of the most uncomfortable medical interventions – radiotherapy, while wearing a tight plastic mask.

It involves a machine shooting beams of energy that penetrate the body and destroy tumours. 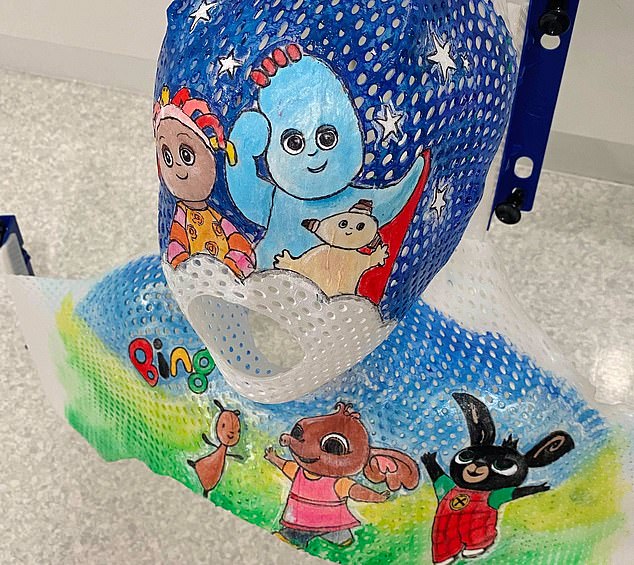 Specialists at Leeds Children’s Hospital have found a way of making the process slightly more bearable – nurses paint them, above, to look like their favourite cartoon characters

However, the head must be clamped still to prevent those rays from hitting healthy tissue, which is why the mask is needed.

But these masks, which also cover the neck and shoulders, can feel suffocating as well as looking frightening, too.

Now specialists at Leeds Children’s Hospital have found a way of making the process slightly more bearable – nurses paint them, above, to look like their favourite cartoon characters.

Lisa Beaumont, at Leeds Children’s Hospital, says: ‘We ask children who they want to look like before they undergo radiotherapy, and we see they try to become the character on their mask.

‘It gives them a superhero alter-ego, which gives them strength to cope with the discomfort. We’ve even seen results of the treatment improve.’