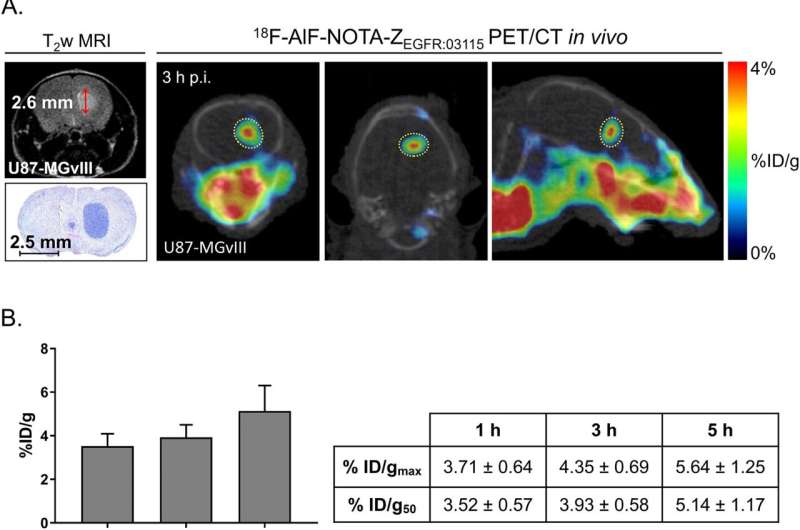 An innovative light-activated therapy developed at The Institute of Cancer Research, London, could help detect and treat an aggressive brain cancer type, a new study shows.

The “photoimmunotherapy” combines a special fluorescent dye with a cancer-targeting compound, which together boosts the body’s immune response.

In studies in mice, the combination was shown to improve the visibility of cancer cells during surgery and, when activated by near-infrared light, to trigger an anti-tumor effect.

The treatment, studied by an international team of researchers from the ICR and the Medical University of Silesia, Poland, could ultimately help surgeons to remove brain cancers like glioblastoma more effectively, and boost the body’s response to cancer cells that remain after surgery.

Glioblastoma multiforme, also known as GBM, is one of the most common and aggressive types of brain cancer. New ways to improve surgery could help patients live for longer.

Surgeons often use a technique called Fluorescence Guided Surgery to treat diseases like glioblastoma and other brain cancers, which uses dyes to help identify the tumor mass to be removed during surgery.

But due to these tumors growing in sensitive areas of the brain like the motor cortex, which is involved in the planning and control of voluntary movements, glioblastoma surgery can leave behind residual tumor cells that can be very hard to treat—and which mean the disease can come back more aggressively later.

This treatment uses synthetic molecules called “affibodies”—small proteins engineered in the lab to bind with a specific target with high precision.

In this study, the researchers combined an “affibody” created to recognize a protein called EGFR—which is mutated in many cases of glioblastoma—with a fluorescent molecule called IR700, which is used in surgery.

Shining light on these compounds causes the fluorescent dye to glow, highlighting microscopic regions of tumors left in the brain, while switching to near-infrared light triggers anti-tumor activity that kills tumor cells.

The researchers tested this combined molecule, or “conjugate”—known scientifically as ZEGFR:03115-IR700—in mice with glioblastoma. They could see the cancer-targeting compound fluorescing in the brain tumors during surgery, just one hour after administration.

Shining near-infrared light on the tumor cells then activated the anti-tumor effect of the compound, killing cancer cells: scans of mice treated with the compound showed distinct signs of tumor cell death compared with untreated mice.

Photoimmunotherapy also triggered immune responses in the body that could prime the immune system to target cancer cells, so the treatment could help prevent glioblastoma cells from coming back after surgery.

As well as being a possible future treatment for glioblastoma, the approach used for ZEGFR:03115-IR700 could also be adapted against other targets in other forms of cancer, using new affibody molecules.

Researchers at the ICR are now also studying the treatment in the childhood cancer neuroblastoma.

Study leader Dr. Gabriela Kramer-Marek, Team Leader in Preclinical Molecular Imaging at the ICR, said: “Brain cancers like glioblastoma can be hard to treat and sadly, there are too few treatment options for patients. Surgery is challenging due to the location of the tumors, and so new ways to see tumor cells to be removed during surgery, and to treat residual cancer cells that remain afterwards, could be of great benefit.

“Our study shows that a novel photoimmunotherapy treatment using a combination of a fluorescent marker, ‘affibody’ protein and near-infrared light can both identify and treat leftover glioblastoma cells in mice. In the future, we hope this approach can be used to treat human glioblastoma and potentially other cancers too.”