Research posted to the bioRxiv* preprint server has shown that procaine and procaine-hydrochloride can reduce replication of SARS-CoV-2 and influenza A viruses in infected cells and reduce the production of cytokines by the viruses, making them potentially useful for treating COVID-19.

The severe acute respiratory syndrome coronavirus 2 (SARS-CoV-2) mainly infects the bronchial and alveolar epithelial cells. Severe infection can lead to pneumonia, pulmonary edema, and multiple organ failure. In addition, cardiovascular complications and high inflammatory markers have been observed, indicating problems in the regulation of the immune system. Similar to past influenza pandemics, treating severe cases of COVID-19 has proved challenging.

Although new SARS-CoV-2 vaccines have proven effective in either preventing or reducing the severity of the disease, there are questions about how much protection they can confer with emerging new variants of the virus. Thus, there is a need for effective drugs that can combat the virus. Aside from fighting the actual virus, drugs could target the cellular factors that promote virus growth or inhibit excessive immune responses.

Local anesthetics have anti-inflammatory and anti-oxidative properties. Studies have also reported their antiviral potential and their ability to regulate cellular factors such as G protein-coupled receptors (GPRs) and mitogen-activated protein kinases (MAPK). These factors are used by the virus for their replication.

Procaine is a commonly used local anesthetic. Researchers from Germany investigated whether a procaine-based substance, ProcCluster® (PC) could inhibit SARS-CoV-2 infection. PC has been used in Germany for several years to prepare oral and dermal prescription drugs. 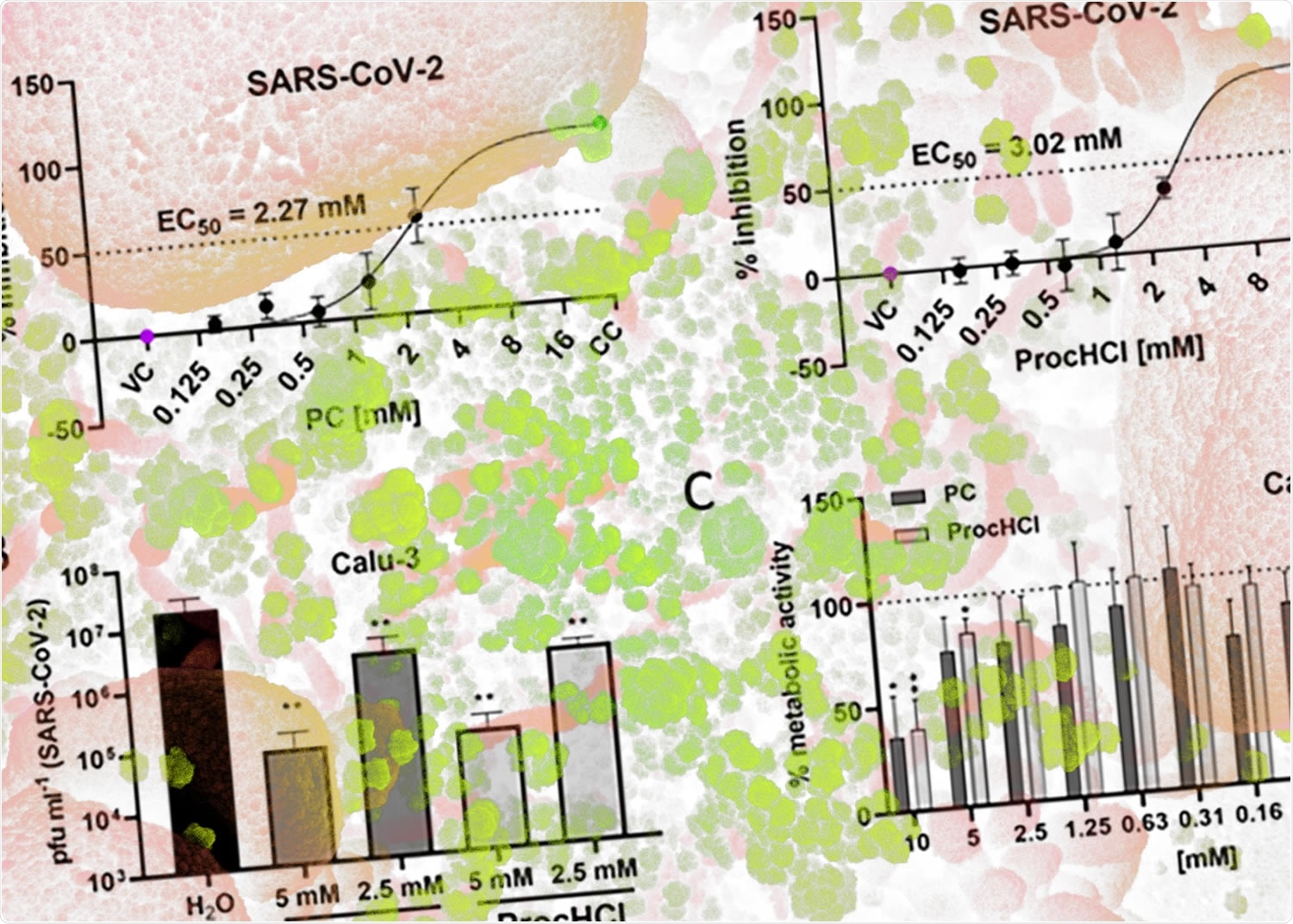 The researchers studied the effect of procaine and procaine-hydrochloride in SARS-CoV-2-induced cell disturbance, viral mRNA synthesis, and viral replication in Vero-76 or MDCK cells infected with the virus. They also looked at procaine’s effect on the influenza A virus.

They found that procaine could inhibit cell death because of viral infection at millimolar concentrations, indicating decreased viral replication. They next studied how procaine affects the progeny of the viruses in Calu-3 cells after several replication cycles. Amounts of both SARS-CoV-2 and influenza viruses were reduced based on the concentration of procaine.

Using a proliferation assay, the authors found that the use of procaine or procaine-hydrochloride does not affect cellular replication or viability. 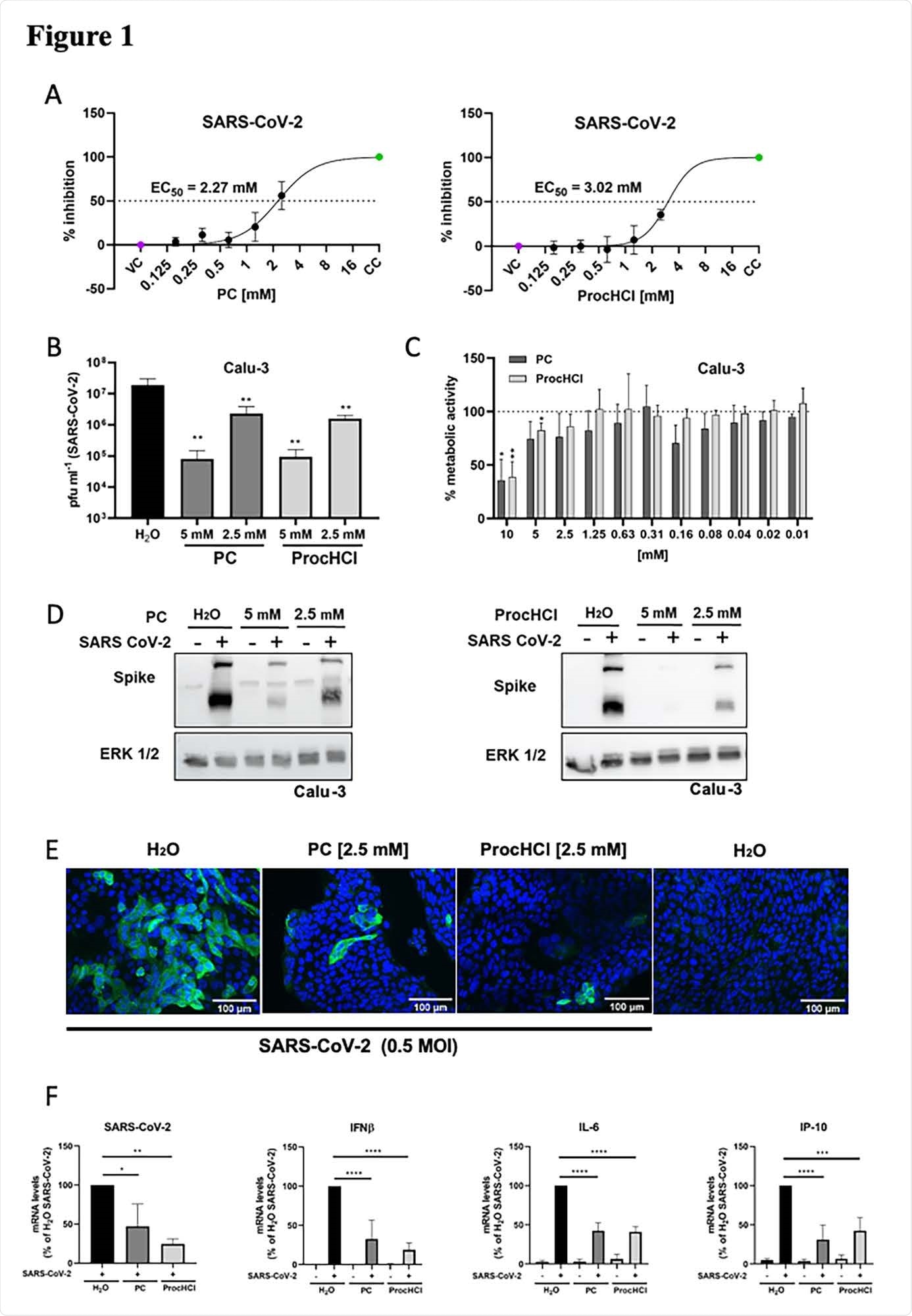 ProcCluster® and Procaine-hydrochloride inhibit SARS-CoV-124 2 infection in vitro. Vero-76 cells (A) or Calu-3 cells (B-F) were infected with SARS-CoV-2 (A-B, D-F) or left uninfected (C) in the absence and presence of the indicated substances (A-F). (A) The relative amount of surviving cells was measured to determine the effective concentrations 50 % (EC50) of PC and ProcHCl. (B) Virus titers were examined by standard plaque assays. (C) Proliferation of Calu-3 cells was analyzed by MTT assay. (D) Protein synthesis of SARS-CoV-2 spike protein was visualized by western-blotting and equal protein load was verified by detection of the housekeeping protein ERK 1/2. (E) Immunofluorescence microscopy shows SARS-CoV-2 spike protein expression (green) and the nuclei were stained with Hoechst-33342 (blue). (F) The mRNA synthesis of SARS-CoV-2 (N1), cellular IFN-b, IL-6 and IP-10 were quantified by qRT-PCR. Data represent the mean + SD of three (A, B, F) or four (C) independent experiments, including two technical samples (*p < 0.05; **p < 0.01; *** p < 0.001; **** p < 0.0001).

For the influenza-infected cells, they saw an accumulation of the nucleoprotein in the untreated cells, which was reduced when the cells were treated with procaine. Both these observations suggest procaine can inhibit viral infection.

Treatment with procaine also reduced viral mRNA synthesis, found using qRT-PCR analysis. The mRNA synthesis of many cytokines was also decreased in the presence of procaine.

Severe COVID-19 and flu are characterized by increased cytokine levels leading to inflammation and cell death, and the ability of procaine to reduce this points to its use as a potential antiviral.

Thus, the results show the ability of procaine and procaine-hydrochloride to inhibit SARS-CoV-2 and influenza A infection and reduce cytokine levels. More studies can elucidate the cellular mechanisms of how procaine inhibits the viruses.

“Since the active ingredient procaine is well-tolerated and already used in the clinics for anesthetic purposes, the further investigation of this substance could enable its reuse in antiviral therapy, including SARS-CoV-2,” write the authors.

Lakshmi Supriya got her BSc in Industrial Chemistry from IIT Kharagpur (India) and a Ph.D. in Polymer Science and Engineering from Virginia Tech (USA).