Loneliness changes the brain: It boosts a chemical that makes you feel fearful and aggressive, study finds

Chronic loneliness changes the chemicals produced in the brain, causing feelings of aggression and fear, scientists have discovered.

But an old, largely failed psychiatric drug might work to alleviate those negative emotions by suppressing the loneliness chemical.

Social isolation has been a growing problem in the US, and has been not only led to increased rates of depression and post traumatic stress disorder, but to higher risks of chronic disease.

Although the California Institute of Technology researchers made their discovery in mice, it may some day help us to develop improved treatments for or even preventative measures against mental illnesses. 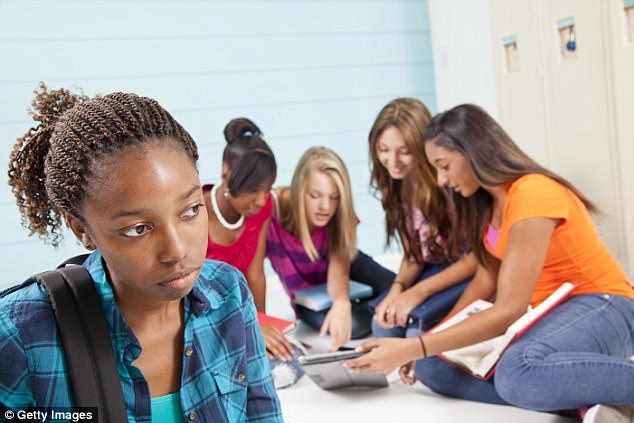 Scientists have discovered how loneliness changes the brains of the majority of Americans who feel isolated, but an old drug may help to block feelings of aggression and fear

Loneliness in the US has been said to be at epidemic proportions.

The majority of Americans fall into the category of being lonely on the University of California, Los Angeles Loneliness Scale.

Many Americans feel alone all the time, misunderstood and as though their relationships are shallow.

Loneliness has historically been regarded as a problem of old age, but the survey found that generation Z – those between 18 and 22 – are the loneliest people in the US.

Not only does loneliness make a clear contribution to depression and anxiety disorders, but scientists have now linked it to physical ailments as well.

Lonely people’s bodies produce more of the stress hormone, cortisol, and can lead to overall inflammation.

A form of stress, loneliness can then in turn increase the risks for heart disease, type 2 diabetes and dementia, especially for those who are chronically alone – or feel that they are.

In experiments, mice kept in isolation for long periods produced more of a brain protein linked to fear.

But the behavior was reversed when the rodents were injected with a drug called osanetant that targets the molecule.

It offers hope of developing medications for bereavement, stress and even prisoners held in solitary confinement.

HOW THE ‘LONELINESS EPIDEMIC’ ISOLATES AMERICANS

Health insurer Cigna conducted a survey of loneliness among 20,000 Americans in May 2018.

The majority of adults in the US are considered lonely according to the University of California, Los Angeles’s scale.

Nearly half of Americans feel alone or left out at least sometimes.

Another 43 percent believe their relationships are shallow.

One in four Americans feel misunderstood by everyone around them.

Although loneliness has historically been thought of as a predicament of the elderly, generation Z (those between 18 and 22) reported feeling the most lonely.

Social media has been a hot topic in mental health, but the study found that it alone does not predict loneliness.

Osanetant was developed as a potential therapy for schizophrenia and major depression.

While it was safe and well tolerated in human studies, it failed to work for these disorders.

Dr David Anderson, who studies the neurobiology of emotions at Caltech, said: ‘Our study raises the possibility that this drug might be repurposed to treat other psychiatric disorders that are related to effects of social isolation in humans – not just in solitary confinement but perhaps in bereavement stress or other types of stress.’

Dr Anderson said mice provide an excellent animal model for to analyse loneliness as social isolation is an intensely stressful experience for them.

When anxious, they generally become much more reactive to a variety of negative stimulants, and these behaviors persist for a long time.

The researchers said the findings, published in Cell, shed light on one of the mechanisms by which chronic loneliness causes the brain to change in a profound way.

They found that being isolated for two weeks resulted in an increase in the fear protein Tac2/NkB.

Dr Anderson said: ‘We discovered Tac2/NkB is upregulated broadly throughout the mouse brain in multiple brain regions that are involved in different types of emotional coping behaviors and aggression.’

His laboratory studies the neural circuitry related to emotional behaviors.

The team, led by Dr Moriel Zelikowsky, noted the diverse effects of Tac2/NkB on behavior came from disparate parts of the brain.

Instead, the peptide is overproduced in multiple locations of the brain, each of which causes one of the changes that persist in social isolation.

‘We think Tac2/NkB is a chemical modulator that coordinates a whole inter-brain state that is caused by social isolation, one that operates in a distributed manner in the brain,’ Dr Anderson said.

The researchers also discovered they could block the behavioral effects of loneliness in the mice using osanetant.

Injections of the medication blocked the aggressive or reactive behaviors when the mice were challenged with fearful or threatening stimuli.

The research follows earlier studies by the team that first found the protein controls the effects of social isolation by increasing aggression in fruit flies.

Dr Anderson said: ‘The fact there is some conservation of function from fruit flies to mice makes me think this peptide might have some role in some forms of stress and their effects on the brains of humans.’

In the latest study, the researchers developed and applied a new way to artificially over- produce and release Tac2/NkB from the brains of mice in group-housing conditions.

Dr Anderson said: ‘When we did that, we can mimic many of the effects of social isolation.’

He pointed out while socially isolated mice are so aggressive they normally cannot be returned to group housing, after treatment with osanetant they no longer attacked their cage mates.

Dr Anderson said: ‘To me, it brings up the question whether this drug could mitigate the well known deleterious effects of solitary confinement, such as increased violent behavior in incarcerated individuals.’

The study also underlines the brain’s ability to adapt to environmental changes – a phenomenon known as brain plasticity.

Previous research has found prolonged loneliness can transform the brain in a way that makes people less able to relate to others.

Changes in the brain’s white matter have been seen before in psychiatric disorders, and demyelinating disorders like multiple sclerosis have also had an association with depression.