The Royal College of Midwives has had a decade-long ‘partnership’ with the dieting company, which is a major sponsor of its events and supplies branded weight loss guides and leaflets for midwives to hand out to expectant mothers.

But now critics are calling for an end to the arrangement, describing it as ‘unethical’, ‘wrong’ and lacking scientific evidence.

They claimed any focus on ‘slimming’ risked triggering eating disorders and anxiety about body image, as well as failing to acknowledge the importance of proper nutrition during pregnancy and breastfeeding.

Professor Amy Brown, an expert in infant health and early parenthood at Swansea University, said: ‘Some women want support to limit weight gain during pregnancy, which they should have.

‘But messages should be about nutrition, strength and wellbeing and not “slimming” because that word fits straight into this narrative that women’s bodies should look a certain way.’ 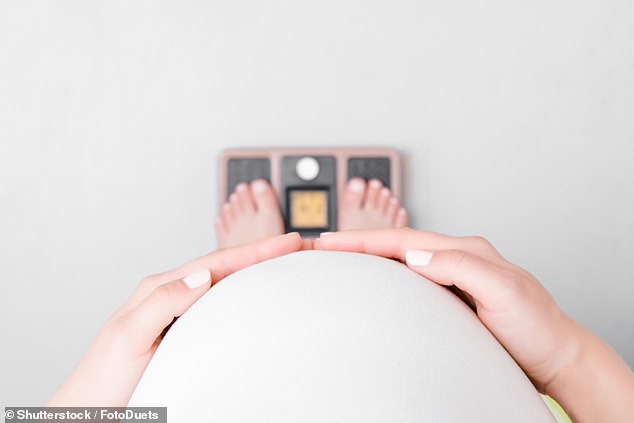 The Royal College of Midwives has had a decade-long ‘partnership’ with the dieting company, which is a major sponsor of its events and supplies branded weight loss guides and leaflets for midwives to hand out to expectant mothers

Weight loss company Slimming World states on it’s website that it does not advise on weight change during a member’s pregnancy and do not encourage weight loss during this time.

It says: ‘Instead we support members in eating a healthy diet and remaining physically active.

‘We also support members in achieving any weight change recommendations made by their health care team, particularly in preventing excess weight gain during this time.

‘Any member wishing to continue attending their Slimming World group during their pregnancy is required to gain the support of their midwife.

‘Slimming World do not advise members on their weight change during their pregnancy.

‘Slimming World group Consultants support the member in maintaining a healthy balanced diet to manage her weight safely as advised by her midwife.’

She questioned whether there was any scientific evidence to show that the Slimming World approach to weight loss and weight management should be promoted to pregnant women above any other method, such as tailored nutritional advice from registered dieticians.

And she highlighted research by Public Health England which found so-called ‘body shaming’ of overweight people could affect mental health and ultimately lead to weight gain.

Slimming World had a large stand in the entrance of the RCM annual conference in Newport, Wales, this week, where it was handing out cardboard body mass index (BMI) calculators designed to be given to pregnant women.

The device told women in higher BMI groups they were at ‘greater risk’ and ‘greatest risk’ of ‘developing weight-related medical problems and having complications during your pregnancy’.

Evidence shows being overweight in pregnancy is linked to a higher risk of health problems, including high blood pressure, gestational diabetes and pre-eclampsia.

The RCM received a furious response on social media when it asked members to share their views on ‘how Slimming World can continue to support you in helping women to manage their weight during and after pregnancy’.

Commenting on the post, exercise and nutrition expert Dr Rehana Jawadwala, director of Mummy Yoga, added: ‘I am sorry to see such a blatant corporate agenda being passed off as “support” at a time when people feel so vulnerable about their changing bodies.

‘Perinatal times are not for vocabulary that includes judgemental and outdated modes of addressing body weight and images.

‘In that respect alone, Slimming World has a lot to answer for and therefore [it is] a terrible partnership.’

A trainee midwife said: ‘I’m really disappointed in this partnership.

‘Women should be supported, if they want it, by dieticians and nutritionists, not by a company who rakes in money by encouraging restrictive dieting.

‘It leaves people with feeling guilt and shame when it comes to eating, hating their bodies and believing their only aim in life is to lose weight.’

Another midwife said: ‘Disgusting, I’m really disappointed that the RCM has partnered with this organisation whose focus is on making money rather than actually helping people understand nutrition.

‘I would never refer a patient to Slimming World… rather than teaching how to eat a healthy, calorie controlled diet.’

While a doula and breastfeeding counsellor added: ‘So much wrong with this — wrong messages to women during and after pregnancy, wrong messages from a company who profits from weight loss, wrong priority for the RCM, wrong partnership.

‘Support women — don’t make the narrative that body shaming postpartum women is acceptable, louder than it already is.’

Slimming World said in a leaflet to health professionals that any members wanting to attend its groups during pregnancy had to have support from a midwife.

It added: ‘During a member’s pregnancy our support focuses on healthy lifestyle behaviours rather than weight loss, with a main aim of preventing excess weight gain.

‘Slimming World does not advise on weight change during a member’s pregnancy and we do not encourage weight loss during this time.

‘Instead we support members in eating a balanced, healthy diet and remaining physically active.

‘We also support members in achieving any weight change recommendations made by their healthcare team, particularly in preventing excess weight gain.’

An RCM spokesperson said: ‘Every midwife and maternity support worker wants the women in their care to have the safest and healthiest pregnancy and birth.

‘We know that having a high BMI when pregnant can cause problems for both mother and baby, including the risk of premature birth and gestational diabetes, both of which can have lifelong implications.

‘Encouraging healthy weight management and healthier eating during pregnancy is something our members support day in, day out, which is why we’re delighted to have our partnership with Slimming World.

‘Through the partnership our members have access to guidance and advice to support pregnant women to make informed decisions about their food choices.

‘Slimming World has been a fantastic supporter of our Caring for You programme, which focuses on the health and wellbeing of maternity staff.

‘This is particularly important when midwives and MSWs often struggle to take their breaks and don’t always have access to healthy options.’

Carolyn Pallister, dietitian and nutrition, research and health policy manager at Slimming World, said: ‘We’re proud to offer support to pregnant and breastfeeding women who are looking for help to manage their weight.

‘We developed our approach in collaboration with the Royal College of Midwives over 20 years ago in response to requests from women and midwives looking for this support.

‘We don’t advise on weight change or encourage weight loss during pregnancy, instead we support members to eat a balanced, healthy diet and remain physically active.

‘All members who want to continue to attend a Slimming World group during their pregnancy must have the backing of their midwife, and we’ve supported thousands of pregnant women to successfully manage their weight and reduce the risk of weight-related complications.

‘Our nutrition and health team have been at the Royal College of Midwives’ Annual Conference this week to provide information about Slimming World and our approach to its members, including those who might not fully understand the policy.

‘We’ve been delighted to receive lots of positive feedback and loved hearing from midwives who’ve seen first-hand how pregnant women in their care have benefited from Slimming World support and resources, including our website.’