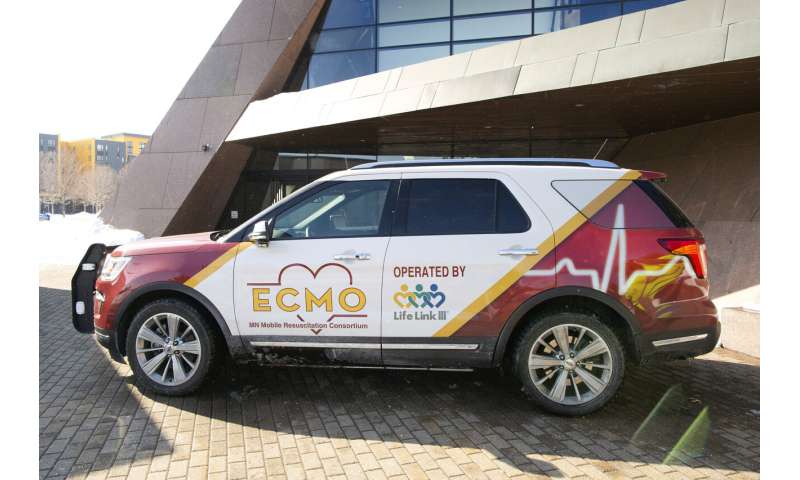 Published today in the EClinicalMedicine Journal, a study from the University of Minnesota found that the first four months of the Minnesota Mobile Resuscitation Consortium (MMRC) was 100% effective in cannulation for out-of-hospital sudden cardiac arrests. Cannulation is when tubes are placed in large veins and arteries in the legs, neck or chest in a patient by a health care provider.

The study’s findings concluded that MMRC is the first community-wide ECMO-facilitated resuscitation program in the U.S. that has:

“A sudden cardiac arrest is when the heart stops and blood flow to the heart and the whole body stops, leading to oxygen deficit and, eventually, death unless treated immediately,” said Demetri Yannopoulos, director of the Center of Resuscitation Medicine and a professor in the Medical School.

“With our mobile teams and cardiac arrest toolkits, we are able to deliver the expertise and equipment needed to stabilize people suffering cardiac arrest within as little as 30 minutes. The ability to deliver these life-saving capabilities so quickly and reach patients across the Twin Cities is a game changer in the treatment of cardiac arrest,” said Jason Bartos, president of the Minnesota Mobile Resuscitation Consortium and assistant professor in the Medical School.

The MMRC mobile ECMO program relaunched this September, following a disruption caused by COVID-19. Since then, the MMRC SUV response team has continued to serve cardiac arrest patients and expand the number of centers where cannulation services are provided.

“Our goal has been to improve cardiac arrest survival, and the early results from the MMRC’s efforts show more people are alive today because of the hard work of all involved,” said Walter Panzirer, a trustee of The Leona M. and Harry B. Helmsley Charitable Trust, which helped launch the program with an $18.6 million grant. “The success of the SUV-based teams shows the way we treat cardiac arrest has changed. We are excited to see this game-changing work continue and shared broadly.”