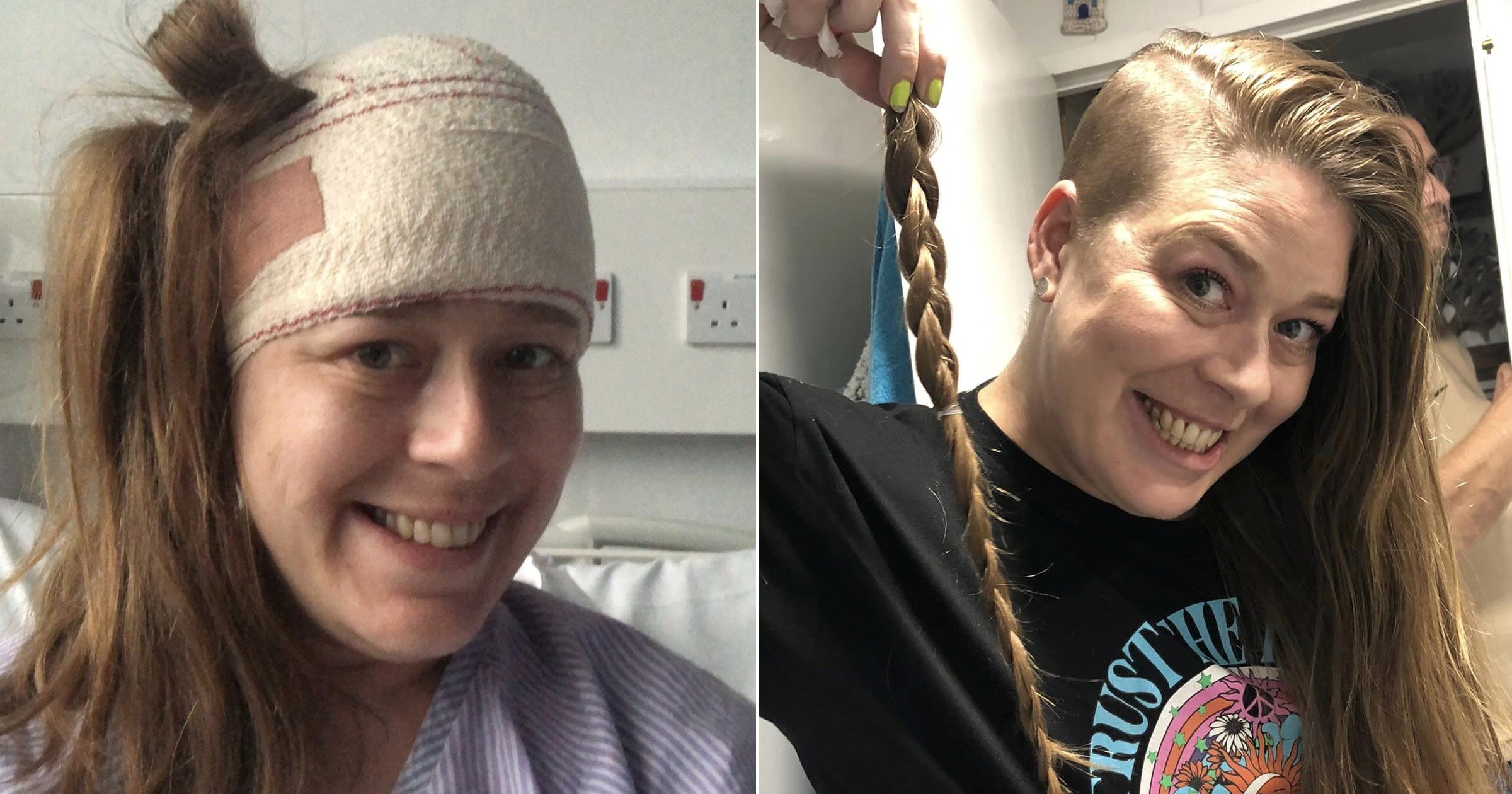 Doctors first told Kaylee Crawshaw, 33, that her excruciating headaches could be down to a trapped nerve.

But to her shock, a CT scan revealed two tumours on her brain that she was told were likely to be cancerous.

Funeral arranger Kaylee compared the tumours, which measured 5cm and 1cm respectively, to a lime and a gooseberry.

The larger of the two was removed last week, and now mum Kaylee, from Weymouth, Dorset, is waiting to hear if she’ll need any more treatment.

She said: ‘It was like I had a fruit bowl in my head.

‘The larger one measured 5cm – about the size of a lime. That was what surgeons removed. I nicknamed it Mike.

‘The second one measured about 1cm, which is about the size of a gooseberry. I nicknamed that one Tilly the Tiny.’

Kaylee had a craniotomy at University Hospital Southampton on October 26, and to her 12-year-old daughter Eleanor’s relief, her only ‘side effect’ has been the shaved head.

‘I decided to shave it before surgery as my hair is my pride and joy,’ said Kaylee. ‘I donated it to The Little Princess Trust.

‘I now get tired easily, but I have my eyesight which is something doctors warned could be impacted.

‘Whatever the results of my tumour are, we will face them together as a family.’

Now, Kaylee is fundraising by taking part in Brain Tumour Research’s 100 Squats or Star Jumps a Day in November challenge.

She said: ‘I completed 200 squats before my operation to get a head start.

‘This month I’ll be supported by my Eleanor, my fiancé and my brother on days where I feel tired.

‘Being faced with something so horrendous, I’ve learned that I’m stronger than I thought.

‘I’m deeply passionate about this cause and encouraging people to get checked out if they feel something isn’t right.

‘My diagnosis came quickly after I experienced headaches.

‘I know that some patients may have a different experience. We need to better understand this disease to give families a fighting chance of staying together.’

Brain Tumour Research says one in three of us know someone affected by a brain tumour – they kill more people under the age of 40 than any other cancer.

Despite this, just 1% of the national spend on cancer research has historically been given to brain tumours.

Mel Tiley, who works at the charity, said: ‘We wish Kaylee all the best during her recovery from surgery.

‘Her story reminds us that brain tumours are indiscriminate and can affect anyone at any time.’

If you want to donate to Kaylee’s fundraiser, you can do so by following this link.