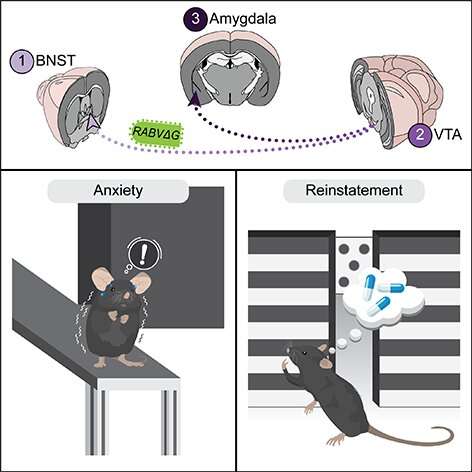 New research from the University of California, Irvine, finds that drug withdrawal-induced anxiety and reinstatement of drug seeking behaviors are controlled by a single pathway in the brain and centered around dopamine cells.

Addiction occurs in phases: Initial drug exposures are rewarding, repeated administration leads to tolerance or sensitization to the drug’s effects, and withdrawal leads to anxiety and a negative affective state, which in turn contributes to reinstatement of drug taking/seeking.

“In order to prevent relapse among drug users, specifically cocaine users, we need to understand the factors in the brain that contribute to drug seeking behaviors and the vulnerability to relapse,” said Kevin Beier, Ph.D., assistant professor of physiology and biophysics at UCI School of Medicine. “In this study, we identified a brain circuit that is responsible for drug withdrawal-induced anxiety as well as relapse-related behavior, along with the identification of a potential target for therapeutic interventions.”

The negative affective state induced by withdrawal from use of drugs of abuse is a critical factor causing drug users to relapse.

“Both the drug withdrawal-induced anxiety and reinstatement of drug seeking are controlled by a single pathway centered around dopamine cells in the ventral midbrain,” explained Beier. “That a single pathway controls both sets of behavioral changes may help to explain many addiction-related behavioral phenomena. Importantly, it links them both directly to dopamine, which is more typically linked to reward-related behaviors.”

Although midbrain dopamine circuits are central to motivated behaviors, the knowledge of how experience modifies these circuits to facilitate subsequent behavioral adaptations is limited. This study demonstrates the selective role of a ventral tegmental area dopamine projection to the amygdala for cocaine induced anxiety, but not cocaine reward or sensitization. Silencing this projection prevents development of anxiety during protracted withdrawal after cocaine use.