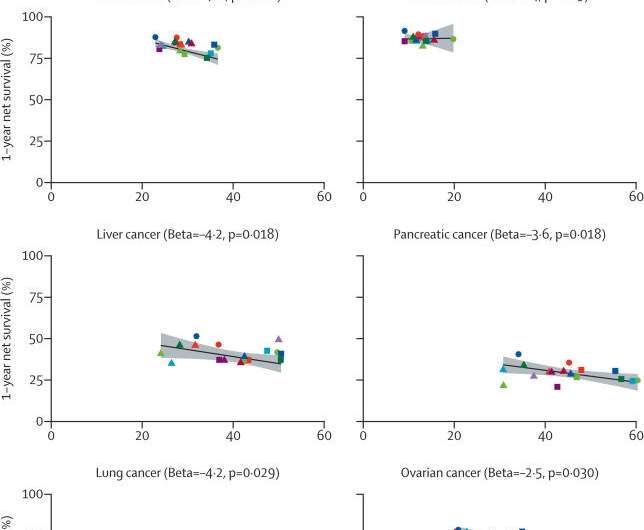 More than a third of cancers in the UK are discovered after patients are rushed to hospital, one of the highest rates in comparable high-income countries, finds a new study led by UCL researchers.

The study also found that countries with higher incidences of these emergency presentations had poorer survival rates for patients.

Published in The Lancet Oncology, the study analyzed more than 850,000 cancer cases between 2012 and 2017 in Australia, Canada, Denmark, New Zealand, Norway and the UK. It compared data on a range of different cancers, how they were discovered and their outcomes.

Across the countries studied, only New Zealand had a higher rate of emergency discoveries at 42.5% than the UK. Norway had the most similar rate to the UK at 36.5%. The lowest rate in the study was the Australian state of Victoria at 24%, which authors said indicated that early cancer diagnosis is lacking and needs to be improved globally.

Lead researcher Professor Georgios Lyratzopoulos (UCL Institute of Epidemiology & Health) said: “This is the first population-based study to ever look at diagnoses of cancer through emergency presentations internationally and to examine their link to survival. It has given us valuable insights into which patients and cancers are more likely to be diagnosed after an emergency hospital admission. Vulnerable patients—those who are older or with advanced disease—are disproportionately affected around the world.

“The data tell us that emergency presentations are a global problem—and not concentrated in a single country or health system. Getting better at preventing cancer, detecting it through screening, or diagnosing it soon after symptoms appear can help decrease emergency presentations and reduce cancer deaths. This message applies to Canada, Europe and Oceania, as well as the UK.”

The study was conducted by the International Cancer Benchmarking Partnership, a global collaboration between clinicians, academics, policymakers and data experts to produce research and policy recommendations, hosted by the charity Cancer Research UK.

Michelle Mitchell, Cancer Research UK’s chief executive, said: “For months we have been warning that cancer survival could go backwards due to the pandemic. The UK is already lagging when it comes to cancer survival—this study helps us understand why, showing that countries with higher levels of emergency presentations have lower survival. If we want to build a world-class cancer service, we need to learn from comparable countries and ensure fewer patients are being diagnosed with cancer after an emergency referral or trip to A&E.

“We’d like to see governments across the UK take bold action on this within their cancer plans—so that by 2032, fewer than 5% of cancer cases are diagnosed through emergency routes.”

There is concern that the COVID-19 pandemic, which began after their dataset ended, has likely made matters worse as it’s made it more difficult for people to visit their doctors for routine screenings and access testing.

Dr. John Butler, clinical lead for the International Cancer Benchmarking Partnership and an ovarian cancer surgeon, said: “Across the globe, the pandemic has challenged healthcare systems. In the UK, access to primary care and diagnostic tests were reduced and screening paused. This means some cancers, especially those with vague, non-specific symptoms, may have gone unnoticed. Cancer plans across the UK must prioritize early diagnosis. To have a better chance of beating their cancer, people must be treated as soon as possible.

“Cancers diagnosed through emergency routes are often more advanced than those caught after GP referral or through screening. This can affect a someone’s chances of surviving cancer, and affects the type of treatment they’re offered. Unfortunately, I often see this with ovarian cancer, where around a third of patients are diagnosed after being admitted to hospital.”