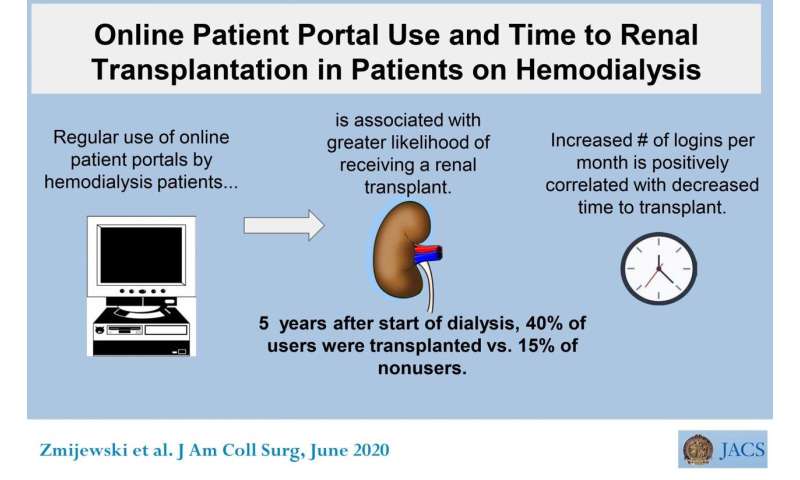 Taking a more active role in one’s own health is known to promote better outcomes, but it is especially critical for patients who are waiting for a kidney transplant. Patients with kidney failure who actively used an online patient portal to track the status of their health care improved their chances of getting a kidney transplant and shortened their wait times for an operation, according to an “article in press” published on the website of the Journal of the American College of Surgeons ahead of print.

Keeping up with medical treatments can be difficult for patients with kidney failure. The alternative is that failing to adhere to their medication and treatment goals can jeopardize their health and delay a transplant procedure.

“We wanted to look at patient factors and tools outside the traditional medical system that can help dialysis patients achieve autonomy and better outcomes,” said study coauthor Polina Zmijewski, MD, a general surgery resident at Rhode Island Hospital and the Warren Alpert Medical School of Brown University, both in Providence, R.I. After patients receive a kidney transplant, they must take suppressive medication to prevent organ rejection and attend regular medical appointments to guide them in maintaining a well-functioning transplanted kidney to stay healthy, she explained.

Online patient portals are beneficial because they allow users to conveniently access their personal health records, view lab tests, and schedule appointments. But these tools may also help improve clinical outcomes. Patient autonomy and proactive behavior are important to the process.

“It’s like you get more invested in the game if you are able to keep score,” said Dr. Zmijewski. “Our theory was that patients who were able to keep score by using an online patient portal would be more involved in their health care and would better comply with medical treatments, which would lead to better health, making it more likely that they would be the recipient of a kidney transplant.”

For the study, researchers examined the medical records of 264 patients who were seen at two outpatient dialysis centers associated with Rhode Island Hospital. The patients were divided into two groups based on their use of MyLifespan, an online health record that allows patients to track their medical progress via the web or a smartphone.

Of the 264 patients who regularly received hemodialysis treatments, 38 were considered active MyLifespan users. Although the active users represented a small group, the researchers found they were a viable group to use for comparison. “For dialysis patients, their outcomes are easily measurable, whether or not they receive a renal [kidney] transplant,” Dr. Zmijewski pointed out. The researchers compared the MyLifespan users with 226 non-users, matched for similar factors such as length of time on dialysis, age, sex, and race. Researchers then looked at whether active users were more likely to get a kidney transplant at three, four and five years after initiation of dialysis.

“We found that patients who were active users of the portal tended to get kidney transplants more frequently, and they were more likely to receive transplants within five years of initiation of dialysis,” Dr. Zmijewski said. The authors note that when a patient is more cooperative with medical treatments, the patient is “more likely to be healthy enough to undergo transplant surgery.”

Another difference was how often patients logged into the online portal. While an exact shortened timeframe was not given, the researchers noted an overall positive correlation trend between frequency of logging in and a shortened time to transplant (p= 0.0067).

The connection can be explained by the fact that non-compliance with dialysis treatments may mean a weaker relationship with health care providers, poorer health and, ultimately, removal from the transplant wait list.

“The patient portal is a very good bridge from the dependent culture of hemodialysis to the independent culture of kidney transplant,” said Dr. Zmijewski.These results provide new evidence that patient portals that improve adherence to treatment goals are a valuable clinical tool that go beyond convenience. In dialysis patients, especially, portals can be used as a tool of autonomy that helps patients transition from dialysis to transplantation.

In addition to the small sample size, another limitation of the study was the inability of researchers to categorize the socioeconomic characteristics of users versus non-users due to the lack of data regarding the income and education level of the hemodialysis patients.