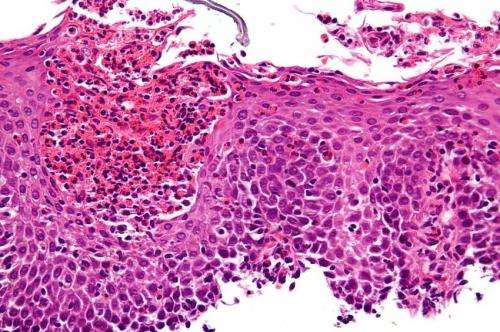 Research led by Case Western Reserve University has identified a promising path to developing therapies to treat esophageal tumors––a form of cancer that not only is among the most deadly, but also has been occurring at increasing rates over the past decade.

The team of researchers from the School of Medicine and Case Comprehensive Cancer Center (Case CCC) said it has identified a potential therapeutic target for esophageal cancers in the form of a cell signaling pathway known as the “transforming growth factor beta signaling pathway,” or “TGFβ-pathway.”

This finding is significant because understanding the cell signaling pathway—and associated behavior—may let scientists know what kinds of drug treatments might be effective for a particular cancer. Cell signaling pathways are a series of reactions that begin with a signal from a molecule like a hormone and then continue then down the pathway until the cell function is processed.

The study also linked a protein-coding gene called Hepatocyte nuclear factor 4 alpha (HNF4α), to the TGFβ-pathway, meaning it is a predictive biomarker of cancer. Predictive biomarkers are the key to early cancer detection which is the most important factor when stopping cancer.

“This finding is important because it shows us the pathway necessary to target esophageal cancers—but someday maybe other cancers, as well,” said Kishore Guda, study senior corresponding author, associate professor at the School of Medicine and member of the Case CCC.

Understanding treatment options is especially important in instances of esophageal cancer, as approximately 20% of people diagnosed in the United States survive five years, according to the American Cancer Society.

Guda’s research team discovered in an earlier study that a type of esophageal cancer known as esophageal adenocarcinoma is characterized by the TGFβ-pathway being hyperactive.

Based on that knowledge and current research from this study, the team reasoned that a new generation drug currently in clinical trials, Vactosertib (ALK5i), which inhibits the TGFβ-pathway, might be an effective treatment strategy.