Coffee is NOT the Holy Grail of weight loss: People who drink a cup of Joe first thing do eat 10% less breakfast – but they make up for the calories later on

Drinking a strong coffee in the morning may stop you from over-eating at a breakfast buffet – but it won’t shrink your waistline, new research warns.

A small study of fifty adults found those who had four ounces of coffee – equivalent to two cups, or half a cold brew – ate 10 percent less when they subsequently arrived at a table of food platters.

However, this filling-up effect was short-lived, and most of the coffee drinkers made up for their skimped calories later in the day.

The findings clarify long-held but unqualified beliefs that coffee suppresses appetite, or that it aids metabolism – which has led to a boom in caffeine dietary supplements that claim to aid weight loss.

The researchers say the fact that the effects were proven to be so fleeting hammer home the importance of maintaining your own balanced healthy lifestyle, rather than trying to rely on quick fixes. 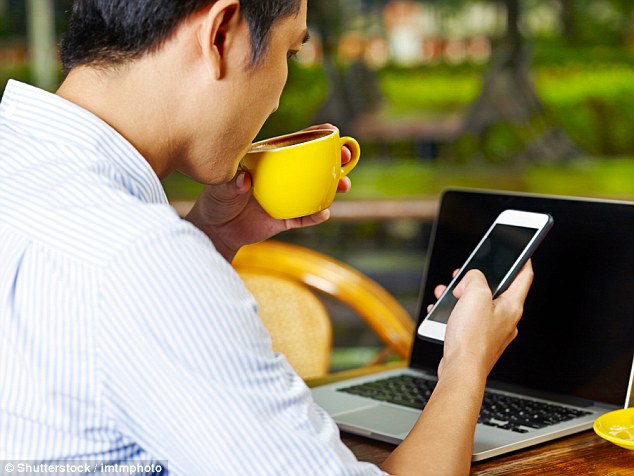 ‘This study, by nature of its rigorous design, reinforces the importance of good eating habits and not relying on unsupported weight loss aids or unhealthy practices,’ said co-author Professor Carol DeNysschen, in the Exercise and Nutrition Sciences Department at The State University of New York (SUNY).

There is also evidence that people who regularly consume caffeine in tea or coffee have a lower body mass index (BMI) than others.

The adoration for coffee is widespread in medical literature – with even the American Heart Association insisting six cups a day is good for your arteries.

However, the boom in supplements, and the boom in cafe culture, has led to countless companies and brands around the world citing lines here and there from various studies on caffeine in a way that may not accurately represent its qualities, or the studies at hand.

They were invited to the lab every day for a month for breakfast.

Thirty minutes before their ‘hearty breakfast buffet’, they were offered a glass of juice. The juice would either contain a placebo dose of caffeine or the equivalent of four or eight ounces of coffee. A double shot of coffee is two ounces.

They asked each person to keep a daily food diary and report their intake and appetite on hourly intervals in an online survey.

Those who drank the juice with the smaller amount of caffeine consumed about 70 fewer calories than the other participants at breakfast, they found.

However, they compensated for the reduced intake at breakfast later in the day.

BMI had found to have no effect on the participants’ responses to the study and there were also no differences in reported appetite associated with the caffeine doses.