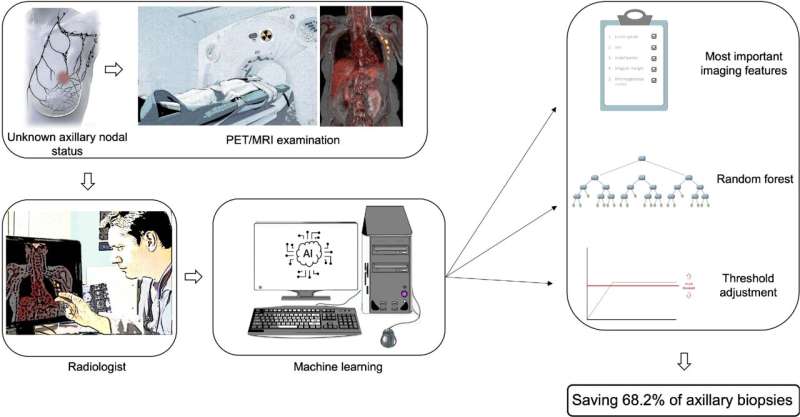 Nearly 70% of breast cancer patients could find out if their cancer has spread to their lymph nodes without having to undergo an invasive sentinel node biopsy. New research published ahead of print in the Journal of Nuclear Medicine shows that with the help of machine learning (a type of artificial intelligence), axillary lymph node metastasis can be reliably ruled out based on imaging with PET/MRI.

“Sixty percent of patients do not have lymph node metastases at initial diagnosis of breast cancer,” said study author Janna Morawitz, MD, radiology resident at the Institute for Diagnostic and Interventional Radiology at the University Hospital Düsseldorf in Germany.

“As such, it would be desirable to be able to prove negative lymph node status by imaging with a high degree of certainty to spare these patients the invasive procedure of biopsy or surgery.”

In the study, researchers sought to determine whether machine learning prediction models could determine lymph node status in PET/MRI examinations as accurately as an experienced radiologist could. A total of 303 primary breast cancer patients from three medical centers were recruited for the study and were divided into a training group sample and a testing group sample.

All patients underwent MRI and dedicated whole-body 18F-FDG PET/MRI. The imaging datasets were evaluated for axillary lymph node metastases based on structural and functional features. Machine learning models were developed based on the MRI and PET/MRI training group sample and were then applied to the testing group sample.