Plague of toxic caterpillars hits the UK: Oak moths that cause deadly asthma attacks and vomiting have been spotted in parks – here’s how to spot them and what to do if you find a nest

A plague of toxic caterpillars that cause life-threatening asthma attacks, vomiting and skin rashes has descended on the UK, officials warn.

Oak processionary moths (OPM), which are in their larval stage, have been spotted across vast regions of south-east England, with numbers steadily rising over the past two weeks.

Hairs on the caterpillars, which feed off oak trees, contain toxins that cause severe dizziness, fever, and eye and throat irritations.

On Twitter this week, the Royal Forestry Society wrote: ‘It’s time to be vigilant! Oak Processionary Moth spotted in parks.’

A spokesman for the Forestry Commission said: ‘It is theoretically possible that if [the pests] were to spread [they] could survive and breed in much of England and Wales.’

He added the caterpillars are distinguishable by their incredibly hairy bodies and white, silk-like nests on oak tress.

If spotted, experts stress people should keep back and report the sighting to the Forestry Commission. 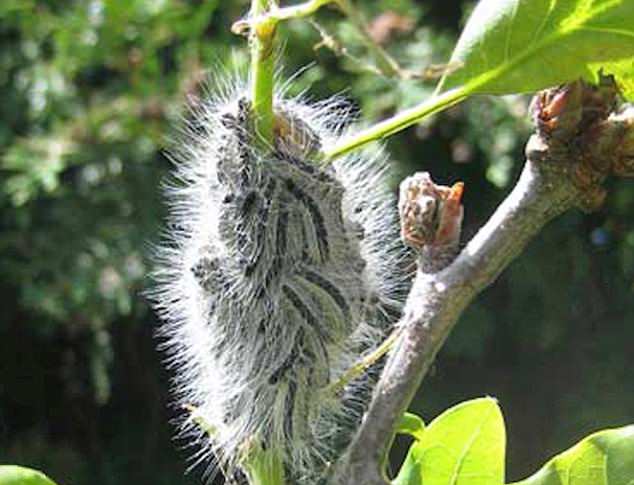 A plague of toxic caterpillars that cause life-threatening asthma attacks, vomiting and skin rashes has descended on the UK, officials warn. They have been spotted in the south east 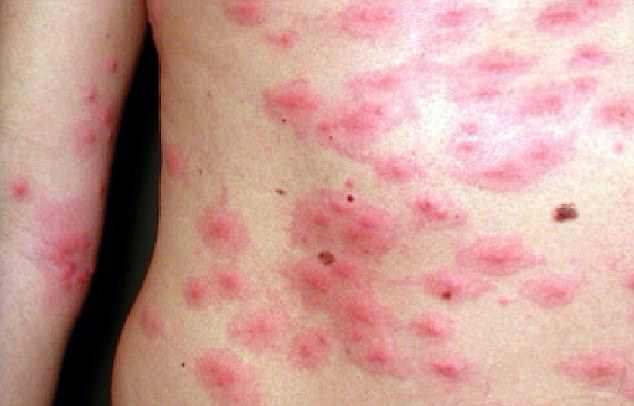 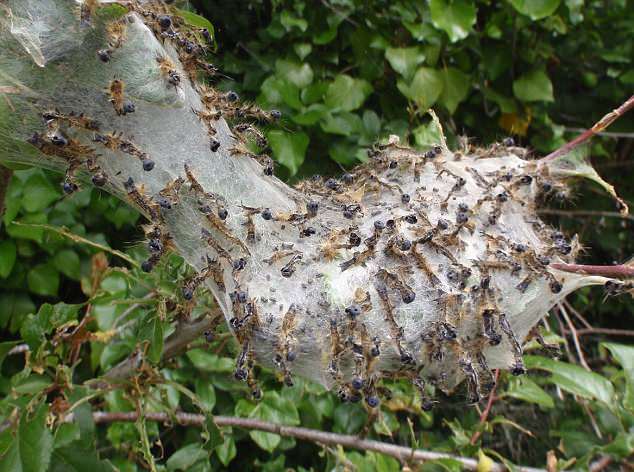 The pests nest on oak trees, leaving white, silk-like trails that are around a tennis ball in size

Where are the caterpillars?

Confirmed nests have been found at four sites in Bexley in south London, as well as Richmond.

Other known ‘hotspots’ include Croydon, as well as areas in Hackney, Tower Hamlets, Southwark, and as far north as Watford in Hertfordshire.

The caterpillars have also been spotted in Ealing, Tooting, Epping Forest in Essex, and around the Twickenham area.

The Forestry Commission spokesperson said: ‘[There] is a government-led programme of survey and control in these areas to minimise populations, spread and impacts.’ Image shows skin irritation after exposure to the pests’ hairs. Other symptoms include fever 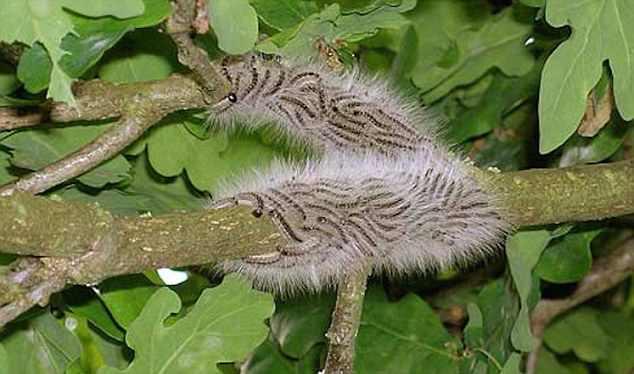 Each caterpillar has 63,000 hairs, which travel in the wind or can be fired off in defence

Do not approach the caterpillars

A spokesman has warned people not to approach the caterpillars and to report any nests through The Forestry Commission’s ‘Tree Alert’ tool on its website.

He added pest controllers are being sent out to target the aforementioned hotspots this week.

More than 150 of these hotspots have been set with traps to kill off the pests, while over 500 spots around London are being sprayed with insecticides.

Four sites in the London Borough of Bexley are being sprayed to remove the toxic caterpillars.

These sites are made up of Danson Park, East Wickham Open Space, Monks Farm Allotment and a Sidcup Place Park.

The spokesman said: ‘The treatment programme is expected to continue for about five or six weeks. We aim to complete this while the caterpillars are still small enough.

‘The oak trees to be treated are those known to have been infested with OPM last year, and other oak trees nearby.’ 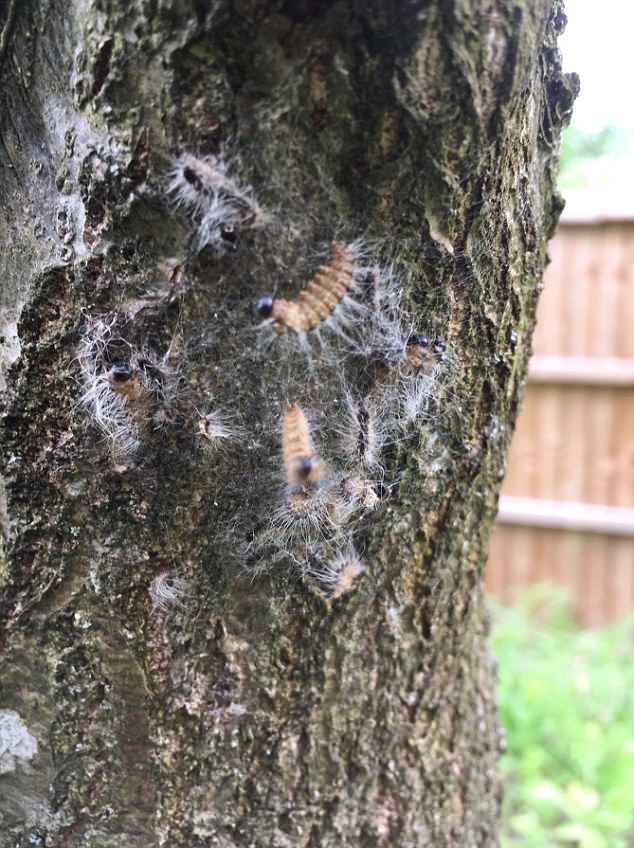 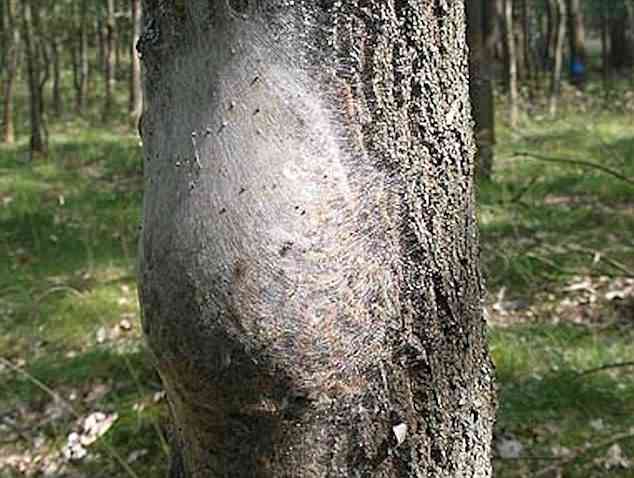 ‘They are a danger to your health’

Craig Ruddick, the arboriculture manager of Richmond Council in south-west London, added: ‘Whilst we know our parks and open spaces draw in visitors great and small some are less welcome than others.

‘Our specialist contractors are busy treating the recently hatched Oak Processionary Moth caterpillars and we ask residents to be cautious when they see these creatures in their own gardens as they are a danger to your health.’

A spokesman for Richmond Council tweeted this week: ‘Our tree contractors will be out and about treating trees affected by the hatching of the Oak Processionary Moth.’ 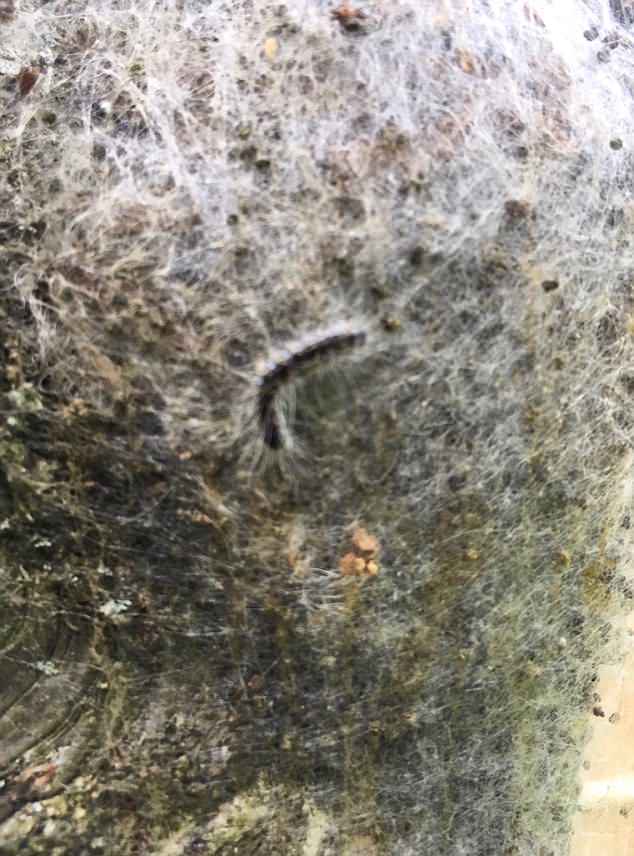 Where did the caterpillars come from? And what do they look like?

The moths first invaded the UK in 2005 while being transported on oak trees imported from the Netherlands.

The current invasion is thought to have come over from continental Europe by similar means.

According to The Forestry Commission spokesperson, the caterpillars are often seen at this time of year on oak trees, moving in a head-to-tail procession. Each have around 63,000 hairs.

Their nests are white and often tennis-ball shaped; with each containing hundreds of caterpillars.

After laying their eggs, the larvae leave their nest and feed on a different oak tree until they have stripped it bare.

‘The nests can occur in a range of shapes, including hemispherical (half a ball), tear-drop shaped, bag-like, and like a blanket stretched around part of a trunk or branch.

‘Sizes range from as small as the width of a 50p coin to stretching several feet up the oak tree trunk in some cases. They can occur anywhere from ground level to high in the oak tree, and can fall out of oak trees and be found on the ground.

‘The caterpillars rest up in these nests during the day between feeding periods and later in the summer they retreat into the nests to pupate into adult moths.’ 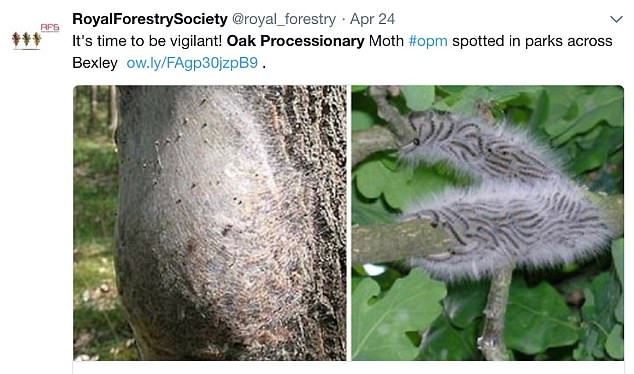 Pets are also at risk

This comes after a similar toxic-caterpillar outbreak occurred in spring 2016.

At the time, The Forestry Commission warned cats and dogs are at risk of serious illness due to them being naturally curious, leading to the animals sniffing or trying to eat the pests.

Andrew Hoppit, the OPM manager at the Forestry Commission, previously added farmers should be aware of such symptoms in their livestock.