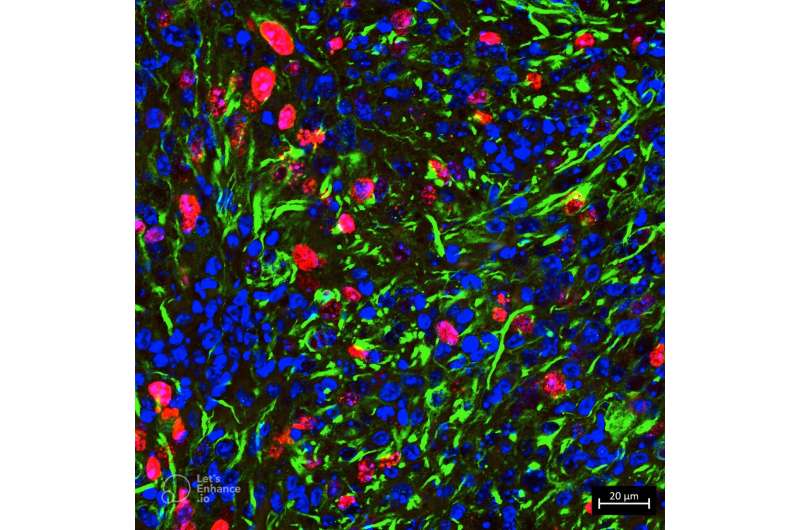 Researchers at the University of Michigan Rogel Cancer Center have identified a novel treatment approach to an aggressive type of pediatric brain cancer, using therapies already approved to treat cancer.

The team developed a mouse model of pediatric glioma with a histone mutation called H3.3-G34. The mutation is seen in about half of children with brain cancer. The mouse model allowed researchers to study the tumor’s biology in the presence of a functional immune system, revealing a promising outlook for long-term survival.

Tumors with the H3.3 mutation have a defect in how they repair DNA. This means the tumors are more responsive to radiation therapy, a treatment that works by damaging DNA. Combined with surgery, radiation has been the standard therapy for pediatric high-grade glioma.

The finding also suggested synergizing the effect by pairing radiation with a small-molecule inhibitor that even further impairs the DNA damage response. They tested this in both human cell cultures and mice using pamiparib, a PARP inhibitor that has been shown to cross the blood-brain barrier.

“If we combine small molecules that inhibit the repair of DNA with radiotherapy, the radiation becomes much more effective. We saw this approach not only improved median survival of mice, but also gave us long term survivors,” said Santiago Haase, Ph.D., a postdoctoral fellow in the Castro-Lowenstein lab. Haase is first author on the paper, published in the Journal of Clinical Investigation.

What’s more, when the researchers injected another tumor into the mice that had received the combination treatment and survived long-term, 80% of the mice were able to eliminate the new tumor without any additional treatment. This suggests immune memory, which could prove crucial in preventing cancer recurrence.

“That’s critical,” Castro said. “This particular tumor can often be removed with surgery. But around a year later, the tumor comes back—and that’s what kills the patient. By combining radiation with a small molecule that inhibits DNA repair, we not only eliminate the primary tumor mass, but we enlist immunological memory to protect these animals from tumor recurrence. That’s an important consideration.”

A previous clinical trial tested a different PARP inhibitor in pediatric high-grade glioma, but it was halted due to poor response. The researchers looked at the inhibitor used, veliparib, and found it was not as effective as pamiparib at crossing the blood-brain barrier. In addition, it was not as effective at killing the tumor cells. When tested in the animal model, it did not provide survival benefit in combination with radiation. The trial also did not select patients based on genetic mutations.

“This is a beautiful example of how precision medicine can work. When we can do the molecular profiling of tumors, it can show us what therapy to implement in relation to the mutations the tumor cells are harboring. One size does not fit all,” said Pedro Lowenstein, M.D., Ph.D., Richard C. Schneider Collegiate Professor of Neurosurgery and professor of cell and developmental biology at Michigan Medicine.

Going one step further, the researchers also observed pieces of DNA outside the cell’s nucleus in the cytoplasm, an unusual phenomenon that suggests viral infection or cell damage. Pursuing this, they found DNA in the cytoplasm stimulates a pathway called STING, which acts as an alarm bell to the immune system, signaling something is wrong.

Combining a STING agonist with radiation led to long-term survival and immunological memory in 60% of mice treated.

The H3.3 mutation is routinely screened for in pediatric cancer patients. In addition, all the therapies tested are already FDA approved. The researchers are currently working to translate their findings into two clinical trials, one to test pamiparib with radiation and the other using a STING agonist with radiation.