For unclear reasons, unprocessed meats, such as steak and lamp chops, are more strongly linked to the fertility condition than bacon and sausages, a US study found.

Endometriosis occurs when tissues that line the womb occur in other parts of the body, such as the ovaries. This can cause agonising pain and make it difficult for women to get pregnant.

It affects one in 10 women of a reproductive age in the US and UK. 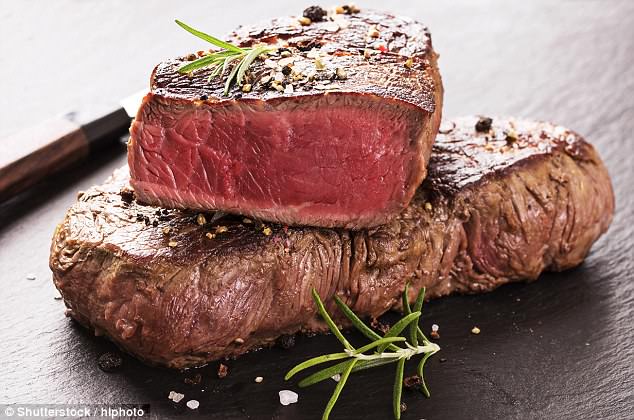 Endometriosis occurs when cells in the lining of the womb are found elsewhere in the body.

Each month, these cells react in the same way as those in the womb; building up, breaking down and bleeding.

Yet, the blood has no way to escape the body.

Endometriosis affects one in 10 women of a reproductive age in the US and UK.

Endometriosis’ cause is unknown but may be genetic, related to problems with the immune system or exposure to chemicals.

Treatment focuses on pain relief and improving a sufferer’s quality of life, which may include surgery or hormone treatment.

The researchers, from the Fred Hutchinson Cancer Research Center, Washington, analysed 81,908 pre-menopausal women across the US between 1991 and 2013.

Every four years, the women completed a dietary questionnaire.

The researchers also monitored any surgically-confirmed endometriosis cases among the women.

Poultry, fish and seafood has no effect

Results further suggest high red-meat consumption is more likely to result in endometriosis that causes pain rather than affects fertility.

Poultry, fish and seafood has no effect on a woman’s endometriosis risk.

Further studies are required to determine if cutting down on red meat reduces endometriosis symptoms in women who already have the condition.

The findings were published in the Journal of Obstetrics & Gynecology.

Breastfeeding reduces the risk of endometriosis by up to 40%

This comes after research released last September suggested breastfeeding reduces women’s risk of endometriosis by up to 40 percent.

Naturally feeding for a total of three or more years across a women’s life reduces her risk of developing the painful disorder, a study found.

For every three additional months a woman breastfeeds per pregnancy, her risk of getting endometriosis is lowered by eight per cent, while exclusively feeding naturally decreases the chance of a diagnosis by 14 percent, the research adds.

This is thought to be due hormonal changes that occur during breastfeeding as women temporarily stop having periods.

Natural feeding also alters the release of certain hormones, such as oxytocin and estrogen, which may determine a woman’s risk of the disorder.