Skip to content
HomeHealth NewsReproductive choice is a woman’s right, I don’t regret exercising mine

It was not a decision I made lightly.

I discovered I was pregnant and carrying the child of my then-boyfriend, who was someone I deeply cared for. But we weren’t in love.

At 27, I was at an age when many women I knew were thinking about having children and getting married. I remember thinking that it would be nice to do the same thing one day, but in 2009 I wasn’t ready. 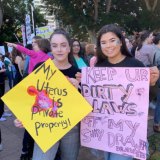 Jolie Kucinskas (left), attended the pro-choise rally in Hyde Park on Sunday with her friend Madeleine Ponferrada, says she was “in awe” at the turn out.

The main reason for this is that I was still getting to know and love myself. The prospect of looking after another person scared me. I didn’t know if I could do it.

When I told my boyfriend about it, I knew he wasn’t ready either. We cared about each other deeply, but weren’t in love. We were both forging very promising careers. I had worked incredibly hard to build mine, studying, working and living in the UK and Indonesia. He had just started his own business.

When I decided I would go ahead with the abortion, the only people I confided in were my GP and my mother. I am sure my mum was very sad at the time, but she was nothing but supportive as she came to the abortion clinic the day I did it.

Once I was in the clinic, I signed a lot of paperwork and was given two opportunities to change my mind. No one was encouraging me to be there, it was my choice completely.

The procedure itself was relatively painless. I was given a short-acting anaesthetic, that kept me awake, but unable to remember exactly what had happened. The last thing I remember is going into a surgical theatre style room, and wearing a special gown.

When I woke up, I was offered a cup of tea and a biscuit, and then my mum took me home. I remember sitting on the sofa clutching a hot water bottle to help with the cramps.

Ten years later, I think about my abortion with sadness, but not regret. I will never regret my decision. I have done so many things and had so many opportunities that I may not have been able to do with a child. I have run a business, lived on four continents and am studying a Master’s degree, and I intend to keep studying.

Since it happened, I have had to live with fear and guilt for doing something that was, and still is, against the law in NSW. This should not have been the case. I did nothing wrong.

As I write this, new abortion restrictions have just been announced in several states of the US and Australian women are protesting in solidarity. In Australia, states also vary in their legislation. In NSW, attempts to decriminalise abortion – including a bill moved in 2017 by Greens Senator Mehreen Faruqi – have failed.

This is not acceptable. In a state where our government proclaims to focus on advancing the opportunity, equality, safety and participation of women, this stance makes no sense. Women want reproductive rights and they want the freedom to choose.

Abortion is never something to be taken lightly, but it must be an option for women who don’t feel ready, for whatever reason, to start a family.