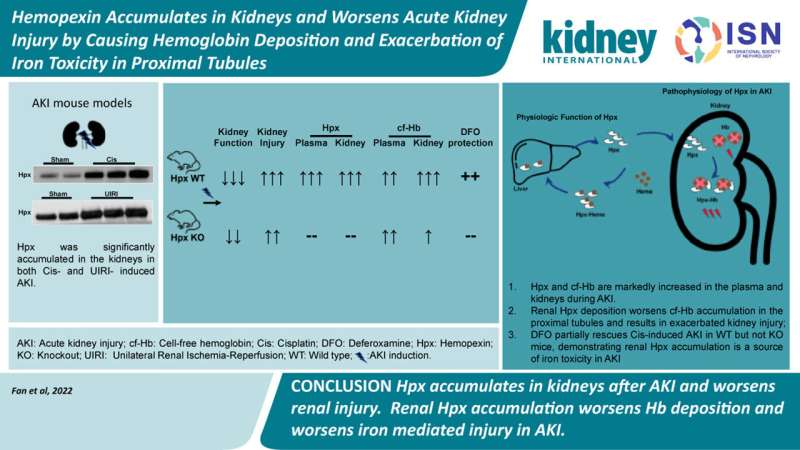 One of the many risks associated with heart attacks and cardiac surgery is acute kidney injury, a serious condition that in some cases can lead to kidney failure.

Common as it is—it’s observed 10% to 20% of the time following heart surgery or a heart attack— scientists don’t have a full biological understanding of why the kidney injury is happening.

A new study from UToledo published in the journal Kidney International shows that the accumulation of a protein called hemopexin in the kidney is partly to blame—a finding that could have implications in a range of kidney injuries.

Gupta, who works as an interventional cardiologist at The University of Toledo Medical Center, had taken note of a decade-old study that found hemopexin was accumulating in damaged kidneys.

Part of the body’s natural defense system, hemopexin bonds to and clears excess heme from the blood. While heme is essential for handling and delivering oxygen within our cells, it can be toxic when too much has been freely released into the bloodstream—something that occurs following many acute illnesses.

It was an interesting observation but no one had yet identified what hemopexin was doing in the kidney.

“Is this good or is it bad? Hemopexin is normally considered a protective protein. Maybe it’s doing something beneficial,” Gupta said. “Or you could hypothesize that it’s normally protective, but in this case, it’s stuck in the kidney and part of the problem. We just didn’t know.”

UToledo researchers sought to answer that question by using a pair of mouse models. One model was normal, while the other had been genetically altered so it could not produce hemopexin. The two groups were then studied in models of acute kidney injury to determine the role of hemopexin.

The team found important differences between the two groups.

Following an acute kidney injury, mice that naturally produced hemopexin experienced significantly worse kidney damage and lower renal function than the mice that could not produce the protein.

The team also found higher levels of a key indicator of oxidative stress in the hemopexin-producing mice.

“Hemopexin has a surprisingly detrimental effect on kidney injury. Essentially, it’s getting stuck in the kidney and it’s bringing with it hemoglobin, which mediates an iron toxicity injury,” Gupta said. “Although iron has important normal functions in oxygen handling, it can be problematic if it’s in the wrong place under the wrong circumstances. Iron can be like a firecracker or explosive, creating all these interactions that are inflammatory.”

Acute kidney injuries are common, particularly in patients who are seriously ill and hospitalized. As the kidneys rapidly lose their ability to filter waste from the body, harmful substances can build up in the blood, causing damage to other organs.

“Because acute kidney injuries have a range of causes, there is no standard treatment. The treatment varies based on the specific cause and typically involves supportive care. If it turns out that hemopexin is playing a role, regardless of what brought on the injury, that could be a major turning point in our understanding of kidney injury,” said Dr. Xiaoming Fan, a postdoctoral fellow in the College of Medicine and Life Sciences and the paper’s first author.

With the knowledge that hemopexin is intensifying renal damage following an acute kidney injury, it could provide a more targeted therapy—if doctors could prevent hemopexin from accumulating in the kidney, they might be able to lessen the damage.

The finding also raises concerns about an emerging interest in hemopexin as a therapy of its own. The protein is being investigated for the potential to treat sickle cell disease, sepsis and complications arising from extensive blood transfusions.

While laboratory experiments have shown promise in hemopexin’s ability to lessen inflammation and tissue damage in those conditions, Gupta said it’s important that researchers now consider a previously unknown side effect.