Ritalin does NOT turn kids into killers, doctors say after the NRA blamed ADHD drugs for Texas shooting

Psychiatrists are refuting the NRA’s claims linking school shootings and other violence to Ritalin.

In the aftermath of Friday’s shooting at Santa Fe High School in Texas, the association’s leader, retired Lt Col Oliver North claimed that perpetrators of school violence are often on drugs, particularly those to treat ADHD.

He particularly cited the psychiatric medication Ritalin, one of the most commonly-prescribed stimulants used to treat the condition.

There has been no indication, however, that the shooting suspect 17-year-old Dimitrios Pagourtzis, used Ritalin or any other drugs.

Experts say that prescription medications, despite their side effects, cannot be held responsible for deadly violent behavior despite its possible side effects. 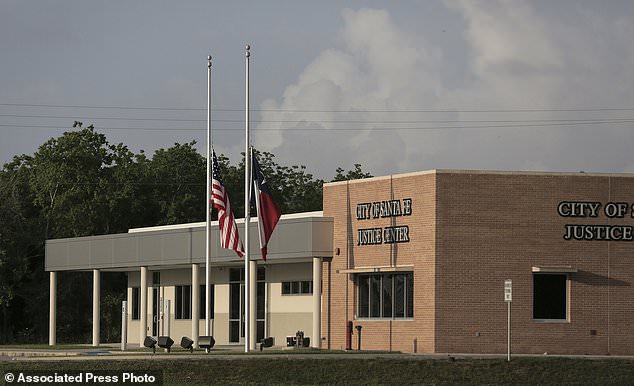 On Friday, eight students and two teachers were shot and killed at Santa Fe High School in Texas (pictured). The NRA’s president has said there is a link between Ritalin and such violence

Retired Lt Col Oliver North told Fox News Sunday that perpetrators of school violence ‘have been drugged in many cases’ and ‘many of these young boys have been on Ritalin since they were in kindergarten.’

He also blamed a ‘culture where violence is commonplace,’ pointing to TV and movies. Investigators have given no hints that Dimitrios Pagourtzis, the 17-year-old suspect taken into custody after last week’s shooting, took Ritalin, despite the NRA’s claims

Investigators have not mentioned Ritalin or any other drugs thus far.

Pagourtzis’ attorney, Nicholas Poehl, said Sunday that he was not aware that his client was on any specific medication.

He said he was surprised that someone with North’s experience with the criminal justice system would ‘make those kind of generalizations with a case that’s less than 48 hours old.’

An NRA spokesman, Andrew Arulanandam, confirmed North was speaking on the organization’s behalf and said ‘there are others who share this viewpoint.’

George DuPaul, a psychologist at Lehigh University in Pennsylvania whose research has focused on ADHD treatment, said a deeper body of research exists on the effects of Ritalin and similar drugs than of treatments for any other condition in children. He said it doesn’t support North’s claim.

‘There’s really no evidence whatsoever that links treatment for ADHD with Ritalin and drugs like that with violence, let alone gun violence,’ he said.

Also known by its generic name, methylphenidate, Ritalin, interacts with the central nervous system, prompting the release of two neurotransmitters.

These chemicals – dopamine and norepinephrine – which speed up brain activity and promote focus and a sense of motivation.

Ritalin and the other most common ADHD medication, Adderall, work in similar ways, but Ritalin is much more fast-acting.

For some, this helps to make its dosage, symptoms and modulation easier, but for other patients Ritalin’s effects can be too fast and intense.

Its side effects can interfere with sleep and appetite, raise the heart rate and can make people irritable.

Though it is unusual, Ritalin (and Adderall) has been known to cause psychosis and can be addictive.

In 2005, the FDA introduced a requirement that Ritalin’s label warn of its potential to cause aggression and psychotic behavior.

If anything, DuPaul said, children on the medications tend to be less aggressive.

‘Certainly, there is some concern in the scientific and clinical community about the potential overreliance on these drugs,’ he said, ‘but it’s a real stretch to go from that concern to connecting these kinds of drugs to these kinds of acts.’

The FDA’s medication guide on Ritalin says to watch for ‘new or worse aggressive behavior or hostility.’

DuPaul said the warning may be a case of being ‘overly inclusive’ of possible side effects or a hint to underlying issues in patients.

‘What’s more likely is that kids with mental health conditions who engage in this type of violent behavior, it’s the underlying condition and not the treatment that leads to this behavior,’ he said.

ADHD itself can interfere with a child’s – or adult’s – ability to regulate emotions.

The disorder tends to hamper working memory, which is crucial to processing emotions effectively in real-time.

For that reason, children with ADHD tend to get overwhelmed and frustrated and sometimes those emotions manifest as aggression.

Rates of aggression among children with the disorder vary depending on the study you rely on, but aggregately, about 45 percent of children demonstrate some defiant behavior.