Sweet solution! Scientists discover a way to reduce sugar content in cakes by 40% – without affecting the taste as confectioners plan to alter recipes

The abundance of sugar is perhaps the most off-putting thing about cake.

But now scientists have discovered a way to reduce sugar content in confectionery – without affecting its mouth-watering sweet taste.

Confectioners have already hinted they will alter their recipes, which could see sugar content of sweet treats fall by 40 per cent.

If the recipes are a hit with customers, it could spell the end of artificial sweeteners, also strongly linked to long-term weight gain. 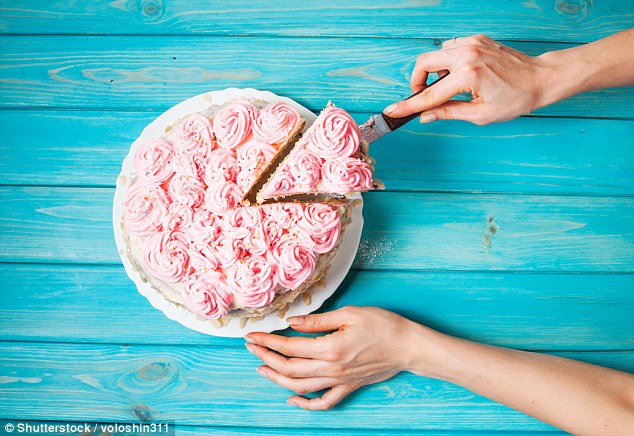 The abundance of sugar is perhaps the most off-putting thing about cake. But now scientists have discovered a way to reduce sugar content in confectionery – without affecting its mouth-watering sweet taste

Israeli food technology firm DouxMatok has discovered how to get all of the sugar in confectionery products to land on the taste buds.

Sugar molecules must land on taste buds in the mouth – most of which are found on the tongue – for people to enjoy the sweetness.

However, only a fifth of sugar used to make cakes, biscuits and chocolate hits the receptors. The rest bypasses them and lands straight in the stomach.

Food experts have for years tried to cut down on sugar content to tackle the obesity crisis – but have failed in their quest so far.

Customers have hit out at radical changes in recipes, which have left their favourite foods and drinks tasting less sweet.

Disappointed shoppers last year likened energy drink Lucozade’s new recipe – halved in sugar – to that of bleach, describing it as ‘rotten’ and ‘horrific’.

But researchers at DouxMatok have found a way to get sugar to land on taste buds – without scuppering the sweet sensation.

It mimics the process used in the pharmaceutical industry, where drugs are coated in molecules to ensure the correct dosage hits the right body parts.

The tech start-up added microscopic particles from tasteless minerals, such as silica, and coated them with sugar molecules.

DouxMatok claims this helps sugar molecules land on the taste buds and make them linger there for longer, The Times reports.

Tests conducted by professional panels confirmed that the taste of foods using its new form of sugar are not affected.

Südzucker, Europe’s biggest sugar producer, has now signed a deal with the Tel Aviv- based firm to make adjustments to its sugar production.

Eran Baniel, chief executive of DouxMatok, told the Times: ‘The deal for Europe includes the UK.

‘We are working [with British companies] at making the adjustments to their recipes for a 40 per cent sugar reduction… I’d say we will see it on UK shelves by 2020.’

However, he warned the process could raise the price of confectionery snacks by 10 per cent, to find extra ingredients to keep products the same size.

It comes after health officials warned in June that children in England have already consumed their entire year’s worth of sugar.

Public Health England calculated youngsters reached their recommended amount of added sugar for 2018 at the end of May.

NHS guidelines say children aged between four and six should have no more than 19g each day. Seven to 10 year olds should stick to 24g.

But data from the National Diet and Nutrition Survey revealed, on average, children are consuming 52g – the equivalent of five Cadbury’s Freddo bars.

CUSTOMERS SLAM DECISION TO SLASH SUGAR LEVELS BY HALF IN LUCOZADE

Customers last April slammed the decision to slash sugar levels in Lucozade in response to the Government’s crackdown on obesity.

Disappointed shoppers likened the energy drink’s altered recipe to that of bleach – describing it as ‘rotten’ and ‘horrific’.

Despite the ‘game-changing’ move being announced the previous November, many were completely unaware as to the change in formula.

Experts remain adamant reducing sugar levels in soft drinks to the desired amount by 2020 will naturally affect the taste.

While diabetics who rely on the popular beverage to prevent fatal complications from their condition have also been affected.

LRS said all of its brands will contain less than 4.5g of sugar per 100ml by 2018 and will be replaced with low calorie sweeteners.

At the time it also said all packaging will be changed to ensure the nutritional information can clearly be seen on the front.