Is THIS what causes mysterious polio-like illness in kids? Scientists discover signs that a common cold virus may trigger life-threatening paralysis in children

Scientists have finally discovered evidence of a virus in patients suffering the mysterious polio-like illness that has left nearly 600 people – mostly children – temporarily paralyzed, offering hope that they could find a cause and a cure.

The condition, known as acute flaccid myelitis (AFM), has long been suspected to have links to certain strains of enteroviruses, common causes of colds.

But doctors had seldom been able to find the virus lurking in the cerebrospinal fluid of patients who were left with sometimes life-threatening, progressive paralysis.

Researchers at the University of California, San Francisco (UCSF), have found never-before-seen fragments of these viruses in the spinal fluid of patients.

Since AFM emerged in 2014, doctors have been been left with little more than guesses for how to treat temporarily paralyzed patients who didn’t test positive for any particular trigger for their conditions.

Now that the team has established evidence that the common virus may well cause AFM, they note that the development of a vaccine against this common-cold-causing bug is likely the best hope for preventing AFM. 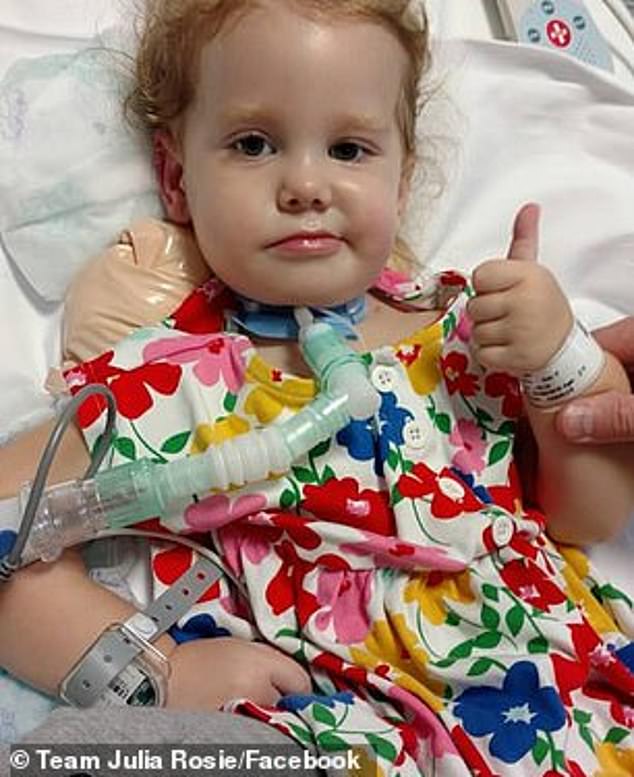 Julia Payne of Chicago, Illinois, was two when she was diagnosed with AFM, a mysterious polio-like condition that scientists now believe is triggered by a common virus

AFM was first recognized in 2014, when 120 people, mostly children, across the nation were brought to hospitals with bewildering, sudden muscle weakness or paralysis in their limbs.

One of those children was the son of a co-author of the new study, Dr Riley Bove.

His entire family caught what they thought was as bad cold.

But for Dr Bove’s son, then four, the illness turned into something much scarier.

A few days after he started coughing, sneezing and sniffling, the boy was struggling to breathe. Soon, he couldn’t move at all, and could barely breathe without the help of a respirator.

Eventually, the symptoms subsided and the boy is now a healthy nine-year-old.

But because so little is known about AFM, Dr Bove still lives in fear that some as-of-yet-unknown long-term complications could rear their head at any moment.

The polio-like disease that sickened at least 233 US children last year, leaving many temporarily paralyzed.

And it could make a return this fall the Centers for Disease Control and Prevention (CDC) warned in July.

Doctors must be on high alert for acute flaccid myelitis (AFM), the mysterious disease that rears its head every two years, typically between August and December.

Yet the CDC was concerned enough to release a study and advisory to urge parents, and especially physicians, to take children’s limb weakness seriously and act fast.

Although there were a handful of cases of the already rare disease the following year, AFM seemed to subside in 2015.

But it was back again in 2016, sickening even more people – 149 – than the first recognized outbreak had.

And last year was the worst yet for AFM.

In total, 590 cases of the rare disease have been confirmed since it was first recognized in 2014.

Most people with AFM have accompanying symptoms of viral respiratory infections, such as congestion, coughing, runny nose and fever.

Testing samples from these patients has helped doctors begin to whittle away at the list of potential culprits.

WHAT IS ACUTE FLACCID MYELITIS?

Acute flaccid myelitis (AFM), of which acute flaccid paralysis is believed to be an effect, is a rare and poorly-understood but serious condition.

The condition is thought to be caused by viruses such as enteroviruses which infect the brain or spinal cord and cause nerve damage.

Viruses believed to trigger the condition usually only cause mild flu-like symptoms but can trigger the more serious AFM.

Patients may also have cold-like symptoms or a fever.

Because its causes are unclear there is no standard treatment for AFM and therapy is usually given on a case-by-case basis.

There are usually only a ‘handful’ of cases in England each year, while the US tends to go through a two-yearly cycle in which there will be a year with only two dozen or so cases then the next year will be over 100.

The virus Enterovirus D68 is believed to be linked to the infection and has been found in patients in both the US and UK.

Several kind of enteroviruses – which cause respiratory infections – have been  linked to AFM cases, but there’s not enough hard, consistent evidence to establish that these are the cause of the disease.

The first suspect was EV-D68, which was linked to 2012 AFM case that predated the CDC’s recognition of the disease.

About 90 percent of people what developed AFM had some sort of respiratory infection, but not all of them had EV-D86. They didn’t all even test positive for a known enterovirus.

In attempts to prove that the virus might be the cause, physicians tested cerebrospinal fluid from the spines of AFM patients for evidence of the virus, which they surmised must be getting into this region and wreaking havoc.

‘People were hung up on the fact that enteroviruses were rarely detected in the cerebrospinal fluid of AFM patients,’ said Dr Michael Wilson, the new study’s senior author and a professor of neurology at UCSF.

‘They wanted to know how someone could get neurologic symptoms with no virus detectable in their central nervous system.

‘If we could detect something specific to a virus in in the spinal fluid of AFM patients, we would feel more secure claiming that the neurologic symptoms of the disease are virally mediated.’

He and his team started their own search the way so many others had: by trying – and failing – to find any traces of the virus itself in the spinal fluid they took from patients.

To double-down on the certainty of the conclusions they could draw from those tests, the research team compiled a library of proteins from every single virus known to infect humans, animals, ticks and mosquitoes.

When they exposed these to the spinal fluid samples taken from 42 children diagnosed with AFM.

Nearly 70 percent of the samples had antibody responses to the enteroviruses – and not to any of the other viruses.

After last year’s record-setting caseload, the CDC has intensified its investigation into the disease, but the cause remains a mystery.

‘When there’s an infection in the spinal cord, antibody-making immune cells travel there and make more antibodies. We think finding antibodies against enterovirus in the spinal fluid of AFM patients means the virus really does go to the spinal cord. This helps us lay the blame on these viruses,’ explained Dr Ryan Schubert, lead author of the study.

It’s a huge step in the right direction, but there are many unanswered questions in the study’s wake.

Enteroviruses sicken so many people with the common cold each year, it’s hardly possible to say how many they strike.

Yet less percent of children that get colds from the virus develop AFM, and scientists are no closer to understanding why the virus’s effects seem to be particular to young children in the first place.

And perhaps most frustratingly, this evidence that the condition is caused by a virus means there’s no treatment, as there are no antivirals to fight enteroviruses.

The CDC has taken the tact of reminding people to be on the look out for the signs of the disease, and continue to practice good hygiene to diminish the risks of transmission of all germs, including the ubiquitous viruses that trigger AFM.

‘The virus is too common to avoid. A vaccine is the only way to meaningfully prevent the disease.’

If past patterns are any indicator, 2019 should offer a bit of a reprieve from cases of AFM.

Even so, 2020 is just around the corner, on the timeline of vaccine development, especially, and if past trends continue, it could be the worst year yet for AFM.