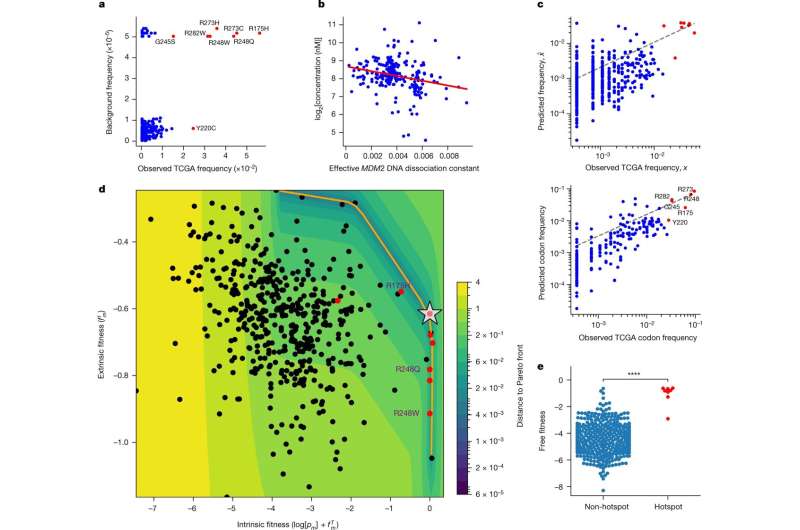 Though the mutations accumulated by cancer cells occur more or less randomly, certain regions of genes essential to cancer growth appear to be more frequently mutated than others in established tumors. Now, a study led by researchers at the Ludwig Center at Memorial Sloan Kettering (MSK), MSK, Weill Cornell Medical College in New York and the Icahn School of Medicine at Mount Sinai has modeled and experimentally verified the interplay between the selection of mutations in such genes and their tendency to invite an immune attack on tumor cells. Its findings, reported in the current issue of Nature, reveal a central tradeoff that guides tumor evolution and that might be exploited for both cancer prevention and therapy.

“Our findings suggest that certain types of mutations most frequently present in tumors are more easily detected by the immune system and these might prove to be optimal targets for tailored immunotherapies to treat and prevent cancer,” said Ludwig MSK investigator Taha Merghoub, who led the study with Roberta Zappasodi, a Ludwig MSK alumnus now at Weill Cornell, MSK computational biologists Benjamin Greenbaum and David Hoyos and Mount Sinai’s Marta Łuksza.

Exploring the emergence of “mutational hotspots” in genes that drive cancer, the researchers hypothesized that they probably reflect a balance of risk and benefit for emerging cancer cells. That is, certain mutations would help cancer cells by vigorously driving their proliferation and survival. But they could also come at a cost, as the protein products of such mutations can be presented to the immune system as “neoantigens,” provoking an immune assault on the tumor.

The researchers reasoned that if tumors tolerate that risk because the hotspot mutations confer a significant growth advantage to their constituent cells, the mutant proteins would be ideal candidates for targeted immunotherapies. Alternatively, if the hotspots are favored only because they escape immune system surveillance, they would be less optimal targets.

To find out which is true, the researchers applied concepts from statistical physics and machine learning to mathematically model the emergence of mutational hotspots in TP53, an extensively studied tumor suppressor gene mutated in more than half of all cancers. Their model considered how distinct TP53 mutations influence the function of the protein it encodes, the fitness of cancer cells bearing each mutant and how visible each made the tumor to the immune system.

The model showed that mutations that alter protein function in ways that benefit tumors cannot simultaneously evade immune surveillance and predicted certain TP53 hotspot mutations in ovarian and bladder cancers would be more visible to the immune system. Those findings were reflected in screens of the neoantigens generated by TP53 mutations in 100 healthy donors.

“Our model also accurately anticipated overall survival of patients in several cancer patient cohorts in The Cancer Genome Atlas, including lung cancer patients who had been treated with immunotherapy,” said Merghoub. “Further, it estimates the age of cancer onset for people diagnosed with Li-Fraumeni syndrome, who tend to develop cancer due to inherited mutations in their TP53 genes.”

Reviewing the literature on TP53 mutations detected in precancerous tissues, the researchers found the same hotspots as those seen in tumors. But the frequency of each hotspot differed between the two, indicating that, early in their growth, tumors favor the growth potential offered by such mutations over the risk they pose of immune detection.