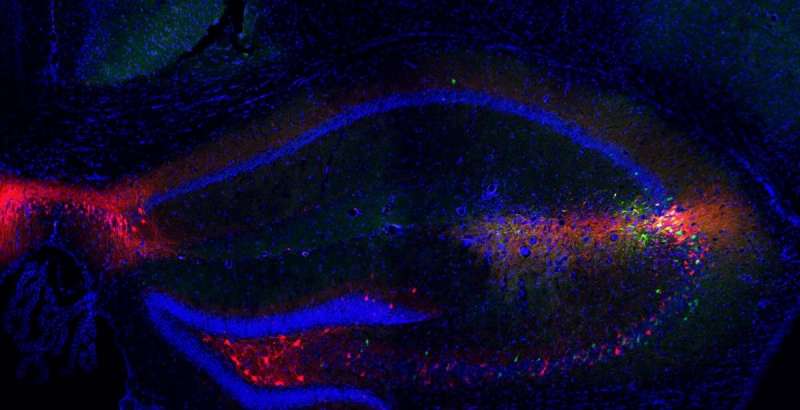 Who wouldn’t like to be better at remembering people you meet, even after a brief introduction?

New research by scientists affiliated with the Wu Tsai Neurosciences Institute at Stanford has shown this could be achieved through targeted stimulation of the brain’s serotonin system.

In a study published October 6, 2021, in Nature, the Stanford team was able to observe for the first time how the mouse brain forms a memory of a new acquaintance and demonstrated the ability to selectively dampen or enhance these social memories with targeted drugs.

“We identified neurons that appear to tell a mouse that it’s interacting with a new animal with a different smell, a different looking face, distinct posture, etc, and generate a new memory trace for that individual,” said Robert Malenka, MD, the Nancy Friend Pritzker Professor of Psychiatry and Behavioral Sciences at Stanford Medicine. “By tuning that neural activity up and down, we were able to change how well animals remembered this new individual later on.”

“Like us, mice live in social groups, and need to be able to quickly remember if another animal is a family member, a former aggressor, a potential mate, and so on,” added Xiaoting Wu, Ph.D., a postdoctoral researcher in Malenka’s laboratory and the lead author of the new study. “This finding is really exciting because it represents the very earliest stage of social memory—an ability to remember new individuals that can then be built upon by future experiences.”

The research adds to a growing body of work by the Malenka lab showing how serotonin and other neuromodulatory chemicals control social cognition in the brain, and represents a promising step towards targeted treatments that could one day improve impaired social function in disorders such as autism, depression, and post-traumatic stress disorder (PTSD).

How the brain builds a dossier

For years, neuroscientists have been closing in on how neural circuitry in the brain’s memory center, the hippocampus, supports the formation of multi-layered social memories. Wu, Malenka and colleagues wanted to know how these social “dossiers” get their start when an animal meets a new individual for the first time.

Led by Wu, the researchers focused on a teardrop-shaped cluster of neurons near the very center of the brain—called the medial septum—which they showed to be particularly active during social encounters between two unfamiliar mice.

To test whether medial septum cells were involved in animals’ ability to remember new individuals, the team genetically modified these cells to be sensitive to a pair of custom drug compounds—one to activate the cells, and one to switch them off. Then they injected mice with one of these drugs just before introducing them to an unfamiliar mouse.

Normally, mice are very curious about new individuals when they first meet them, touching whiskers and sniffing them all over. Once this initial investigation is over, however, the animals largely go back to their own business. The animals clearly remember this initial encounter for at least half an hour, because meeting the same animal again doesn’t get them nearly as excited: Same furry face I just met—nothing new to see here.

But when the researchers used a drug to selectively inhibit medial septum neurons just before introducing a new animal, they prevented the formation of these social memories. The first meeting went normally, but when the animals met again even just minutes later, the affected mouse acted as if it had never seen the other animal before.

On the flip side, using a different drug to selectively enhance medial septum activity during the animals’ first meeting triggered super-powered social memory: Normally mice forget an initial encounter within a couple of hours, but these mice clearly recognized their new acquaintance even 24 hours later.

Having shown these medial septal neurons to be critical to the formation of new social memories, the researchers then demonstrated how these memories are stored. They traced medial septal neuron projections into the region of hippocampus where social memories are thought to reside, and showed how the activation of these projections during social encounters triggers strengthens synaptic connections in this area.

“Presumably,” said Malenka, “these strengthened connections represent the creation of a new memory for this new individual, which the hippocampus can then add more context to if the animals encounter one another again.”

A new role for serotonin in forming social memories

But the team wasn’t finished—they also wanted to know what triggers the activity of medial septum cells during social encounters in the first place. Based on the Malenka lab’s growing body of research on the role of the neurotransmitter serotonin in social cognition, the team had a strong hunch of where to look.

Through a comprehensive series of experiments, the researchers demonstrated that serotonin-producing neurons in the brainstem release the neuromodulatory chemical throughout the brain during novel social encounters; that this release stimulates medial septum neurons via a particular subtype of serotonin-sensitive receptor molecule; and that blocking either serotonin release or activation of this receptor molecule in medial septum prevents the formation of new social memories.

Similarly, the researchers showed that social memories could be made to last ten times longer by enhancing serotonin signaling during an initial social encounter—either by stimulating serotonin producing neurons in the brainstem, or by directly injecting a drug that activates specific serotonin receptors into the medial septum itself.

The discovery that the formation of new social memories depends on just one of the 16 different types of serotonin receptor molecules employed throughout the nervous system is promising for potential translation to human psychiatric disorders, the researchers say.

“We know that issues with social memory can become a problem in disorders like depression and PTSD, where people can misattribute emotions or memories to different people in their lives,” Wu said. “The beauty of these findings is that you could imagine using drugs that target only this particular type of serotonin receptors in the medial septum to improve social memory deficits without affecting other serotonin signalling throughout the body.”

Serotonin is probably best known for its role in depression, which can sometimes be treated by raising levels of the neuromodulator throughout the brain, but the function of the neurotransmitter has been remarkably difficult to pin down. Produced by a cluster of neurons in the brainstem, the neurotransmitter is released throughout the brain and nervous system, and has been linked to roles in regulating mood, hunger, aggression, sleep, nausea, and digestion.

“I think it is increasingly obvious that attributing any ‘global’ function to neuromodulators like serotonin is not warranted. To understand their role in normal brain function and disease, we need to understand the specific context of the brain regions where they are acting,” Malenka said.

The new research adds to a growing body of work by the Malenka lab that strives to isolate specific roles played by the serotonin system in dysfunctions of social cognition.

For example, a 2018 Nature paper showed how animals’ overall sociability is tuned by the same subtype of serotonin receptor acting in a nearby brain region called the nucleus accumbens. Earlier this year, the lab demonstrated that the same targeted drug that enhanced social memory in the current paper also improved measures of sociability in half a dozen different mouse models of autism. And, in a 2019 study the group showed how distinct effects on serotonin signaling by the recreational drug MDMA, sometimes called Molly or Ecstasy, could be used to isolate the drug’s potentially therapeutic enhancement of social bonds without its dangerous addictive properties.