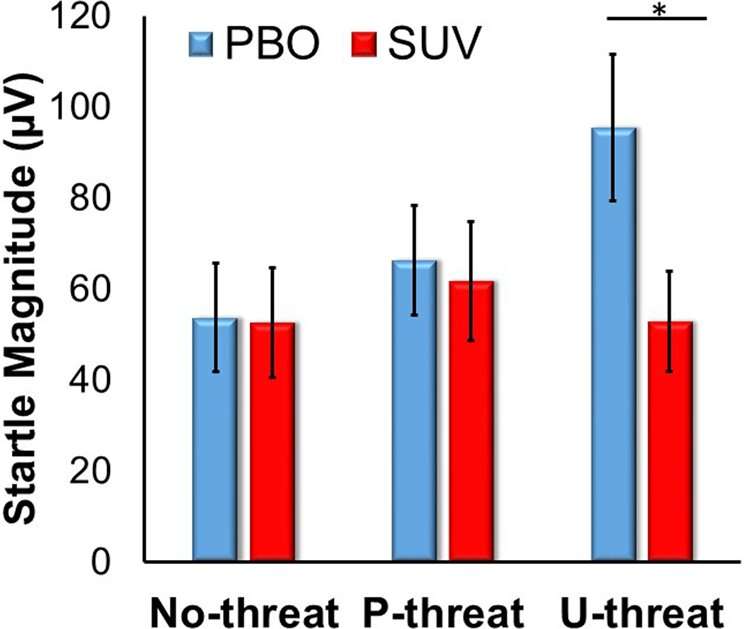 Clinicians and researchers have known for some time that uncertainty fuels anticipatory anxiety—that heightened sense of caution and vigilance when danger is lurking. Though uncertainty is universally unpleasant, some people are particularly sensitive to uncertain threats in their environment. This sensitivity can manifest as chronic anticipatory anxiety and for some, excessive alcohol abuse.

A study by researchers at The Ohio State University Wexner Medical Center and College of Medicine suggests that inhibiting a particular neurochemical system in the brain may offer a new strategy for controlling anticipatory anxiety, and perhaps reduce stress-related alcohol use.

“Medications now exist to treat anxiety and alcohol use disorders, but they are only modestly effective and do not work for everyone,” said lead author Stephanie M. Gorka, associate professor of Psychiatry and Behavioral Health and a researcher specializing in anxiety and substance use disorders. “There is an urgent need for new and more effective pharmacotherapies for these often-linked conditions,” she added.

This study was designed to show whether antagonism of the human orexin system reduced objective markers of anticipatory anxiety in the laboratory. Suvorexant, an FDA-approved medication for the treatment of insomnia, was used to manipulate the orexin system in human volunteers. Orexins are small molecules, or peptides, which are produced in the hypothalamus and regulate a range of processes such as wakefulness, arousal, energy metabolism and stress reactions.

“Our findings suggest that a single dose of an orexin system antagonist dampens anticipatory anxiety,” said principal investigator Dr. K. Luan Phan, professor and chair of Ohio State’s Department of Psychiatry and Behavioral Health. “The findings are especially important because they suggest the orexin system is a promising target for next-generation medication development.”

The researchers published their work in the journal Translational Psychiatry.

The proof-of-concept study involved 21 healthy volunteers who were given either the drug or a sugar placebo of identical appearance. Two hours after receiving the tablets, the volunteers were subjected to a laboratory task designed to elicit anticipatory anxiety using threat of a mild electric shock to the wrist.

The test involved three conditions: anticipation of a predictable shock, anticipation of an unpredictable shock and no shock. A computer screen displayed text that told the volunteer which condition they were in. Magnitude or strength of the human eyeblink startle reflex was recorded in each of the three conditions. Startle eyeblink is a well-validated marker of current anxiety levels in both humans and animals.

In addition to measuring startle eyeblink during the task, the researchers used questionnaires to assess subjective drug effects and participants’ mood states during the study.