Suicides among middle-aged men in Japan spike on Monday mornings before they go to work, study says

Researchers from Waseda University in Tokyo and Osaka University say the majority of men between ages 40 and 65 take their own lives before they leave for work.

The team says this is the first study to deduce that specific times of day correspond with a higher number of suicides.

Japan has long battled one of the world’s highest suicide rates and economic stagnation that lasted nearly 20 years.

The team says it hopes the findings lead to telephone consultation services expanding during early morning hours, when the majority of suicides occur, rather than just in the evening. 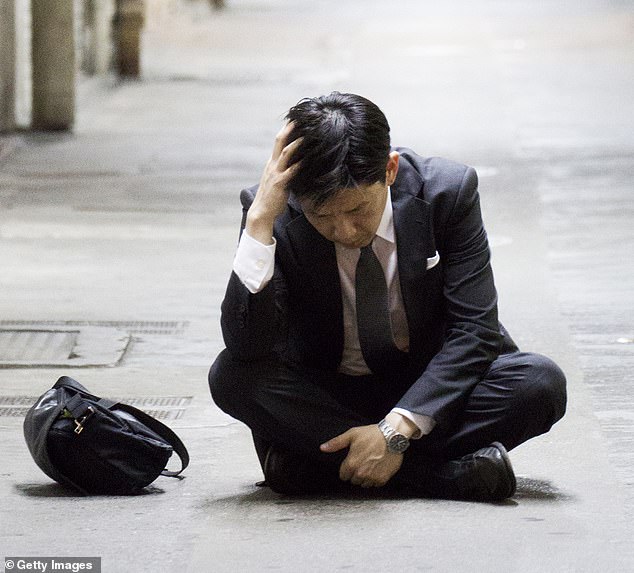 For the study, the team looked at more than 873,000 suicides recorded in the national death registry in Japan between 1974 and 2014.

By analyzing the data, researchers found the day and time people committed suicide varied by sex, age and economic conditions.

Results showed that men between ages 40 and 65 committed suicide the most between 4am and 7.59am on Mondays, with the peak occurring between 1995 and 2014.

Men in that age group were taking their own lives at a higher rate than men and women of other age groups.

The period between 1991 and 2010 is known as the Lost Score, referring to a period of economic stagnation in the country after the asset price bubble burst

Economic expansion came to a standstill with little-to-no growth, deflation and stock market prices near record-lows.

According to a paper from UC Berkeley on the crisis, 13 financial institutions ‘went effectively bankrupt’ in 1995, which might explain why the spike in suicides started that year.

Daytime suicides among men in the 40-to-65 age group were 1.57 times higher than suicides that occurred at night.

Additionally, the number of suicides that took place on Mondays was 1.55 higher than the number on Saturdays.

The team believes the majority of men among the 40-to-65 group were taking their lives before they left home to go work rather than during their commute.

This is because most causes of death were found to be hanging and gas poisoning, which would likely occur in their homes or in their cars.

Researchers said that men who were aged 66 and older and women among all age groups mostly committed suicide during the day, with a peak occurring near noon.

To drive this number down, the authors recommend more telephone consultation services be offered during early hours in the morning.

In Japan, many are only offered in the evening and late at night.

The new study comes on the heels of a report from Japan’s education ministry on Monday, which found that child suicides in the country hit a 30-year high.

Between 2016 and 2017, 250 children between elementary and high school ages took their own lives.

Local media reports that many of the children were dealing with stress, bullying and family problems.

The number was five more than the previous year and the highest since 1986 when 268 students died.

For confidential help, call the National Suicide Prevention Lifeline at 1-800-273-8255 or click here.

For confidential support on suicide matters in the UK, call the Samaritans on 08457 90 90 90, visit a local Samaritans branch or click here.

For confidential support in Australia, please call Lifeline on 13 11 14 or click here.