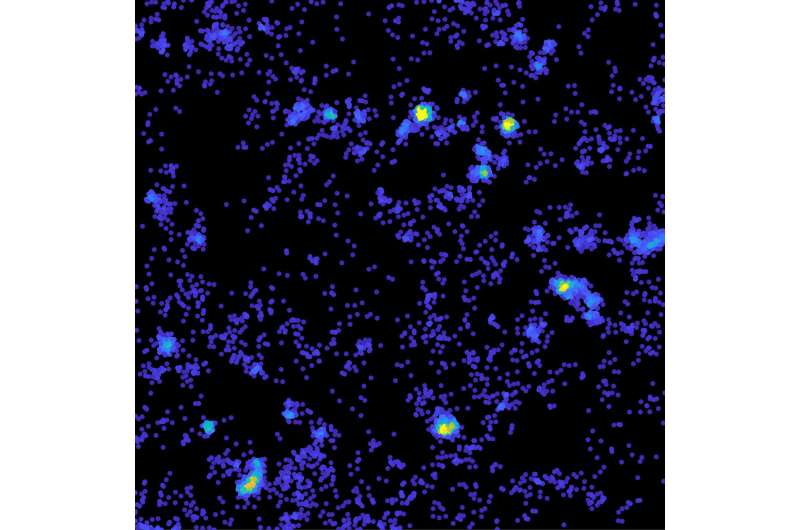 Newly discovered cellular hot spots of a potentially toxic protein could open new research avenues into how Alzheimer’s disease progresses in the brain.

Scientists made the discovery while trying to understand how the protein Tau spreads throughout the brain at the Queensland Brain Institute’s Clem Jones Center for Aging Dementia Research (CJCADR).

“Tau is particularly important because changes to this protein are thought to cause dementia,” lead author Dr. Pranesh Padmanabhan said.

“Because of these modifications, this protein can aggregate and spread from cell to cell, potentially causing cell death.

“But how this protein transfers across cells has been unclear at the molecular level.”

Most research on Tau has been centered on its relationship and interactions with microtubules and possible signaling pathways of the cell.

The team, led by CJCADR Director Professor Jürgen Götz and Dr. Padmanabhan, used super-resolution microscopy to focus on the plasma membrane—the barrier between the cell and its outside environment.

“We managed to look at individual Tau molecules very close to the plasma membrane, how they move and organize at a nanoscale level,” Dr. Padmanabhan said.

“Firstly, we found that Tau localized to the plasma membrane and displayed highly heterogeneous behavior in space and time.

“But a more intriguing finding was that these proteins started to form what is called a hot spot, within which Tau molecules are highly immobilized.

“We also found that lowering cholesterol, which reduces Tau pathology in Alzheimer’s disease mouse models, had little impact on these hot spots.”

Dr. Padmanabhan said these discoveries have the potential to spark a better understanding of how dementia starts, and what prompts it to spread from cell to cell.

“Now, these hot spots could mean a lot in terms of Tau’s functions,” Dr. Padmanabhan said.

“It could be the site where it is released, or these hot spots could be locations where Tau executes its multiple functions.

“Understanding what these hot spots mean requires further work, but at least it gives a starting point to think about the role of Tau in health and disease in a completely different way.”

Professor Götz said the findings demonstrated the importance of new technologies, such as super-resolution microscopy, in making new discoveries about the brain.

“This new research opens the way for gaining deeper insight into how Tau and other key proteins impair neuronal functions in a pathological context such as Alzheimer’s disease,” he said.

“It also emphasizes why it’s critical to continue to invest in core facilities and technologies.”